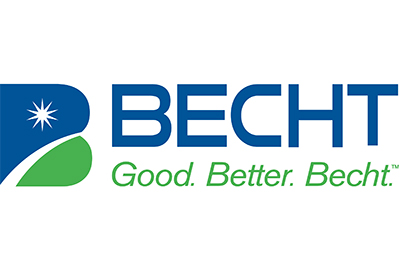 By Clay White and Frank Sapienza

Thickness measurement data generated through the routine inspection program represents the largest source of data generated in the mechanical integrity department of a refinery. Gathering as much usable information from this data in a time efficient manner presents one of the greater challenges to plant inspectors and engineers.  Some refineries spend more than 60% of their annual inspection budget on just maintaining the CML data.

Inspection Data Management Systems (IDMS) now store thickness data in readily accessible formats; however, these programs often allow for extensive automation which can minimize the extent of review and analysis performed on the data if allowed to occur.

Optimizing the information gained from thickness data involves addressing and eliminating these uncertainties.

The data analyst may be an inspector, engineer, or other qualified person. Thickness data can provide substantial useful information. Some selected cases are presented below.

It is important to understand the remaining life calculations stored within the IDMS4. Thickness locations with short remaining lives must be reviewed on some frequency to ensure the appropriate action is assigned. At some point, for example, once retirement limits are validated, inspection is no longer an adequate mitigation. The goal of a mature thickness monitoring program is to implement proactive maintenance and minimize surprise inspection findings. To accomplish this, remaining life data must be reviewed and validated, then translated into mitigating maintenance actions. Two factors that typically need to be investigated to review actionable remaining lives are corrosion rate and thickness.

One of the most important and often overlooked piece of information is the evaluation of corrosion rates within the IDMS4. Rates over 50 mpy are often due to data management errors; however, these must be promptly resolved in the event there is legitimate corrosion that cannot be managed through continued inspection. It can often be useful to set metric limits for queries on corrosion rates. From there, a root cause type analysis can be performed to determine if the rate represents measured corrosion, administrative error, or requires data validation follow ups. An example query shown in Figure 1 can be color-coded at different thresholds to facilitate user review. It is advised to set thresholds of corrosion rates above which the site does not feel confident managing the corrosion with inspection, typically 20-50 mpy. If these rates are determined to be valid, this would initiate a feedback loop with the corrosion engineer on damage mechanisms and the process on operating conditions. These may influence corrosion, leading to new Integrity Operating Windows (IOWs) or proactive maintenance. 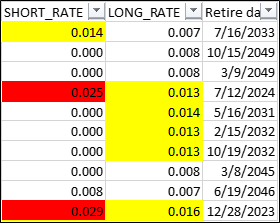 In addition to corrosion rate discussed above, the other key component to remaining life is the thickness measured. It is important to consider that any thickness program is a sampling of measured thickness which represents a circuit1. It is helpful to have a threshold thickness upon which further evaluation is given. An example is within 30 or 50 mils of the IDMS retirement limit. Once this threshold is reached, it is important to evaluate the thickness for validity by reviewing past inspection techniques and measured thickness. This may require review of RT film or backup paper records of original UT data. In other cases, field measurement verification will need to be performed. This is more critical once a lower thickness is reached, as the margin for error if a wrong corrosion rate is applied is far less than a thicker component.

The analyst should also evaluate if the additional areas should be inspected, which are not currently represented by Condition Monitoring Locations (CML), but are in the same circuit with the same damage mechanism. These areas may have a lower thickness than currently measured.

Once the corrosion rates and thickness have been reviewed, the analyst may find it useful to perform a higher level of data analysis to further reveal insights on the equipment corrosion profile. This is generally done for specialty situations, but some users are beginning to apply some level of statistical analysis to all thickness data. Current IDMSs have some statistical basis calculations built in which can be applied to remaining life or corrosion rate. However, the site should review and understand the implication of the IDMS calculations and the limitations and recommendations identified in Inspection Codes/Standards (API 570/574) before application.

Once the analysis is performed by a qualified person, the analyst must follow up on the specific details of the identifed data points to translate the statisical outlier into inspection action. Without understanding the distribution results, the resulting action may not be meaningful.

Previous publications have discussed the merits and application of statistical analysis of thickness data in identifying localized corrosion2,3,5. The probability plot shown in Figure 2 is an example of such a case.

In Figure 2, two elbows in a high velocity zone of the piping were identifed as thinner than the remaining elbows on the piping circuit. Because of this identification, an increased inspection interval with more detailed inspection techniques was applied to the identified high loss zone, instead of applying the increased intervals and more costly and time consuming techniques to the entire circuit. 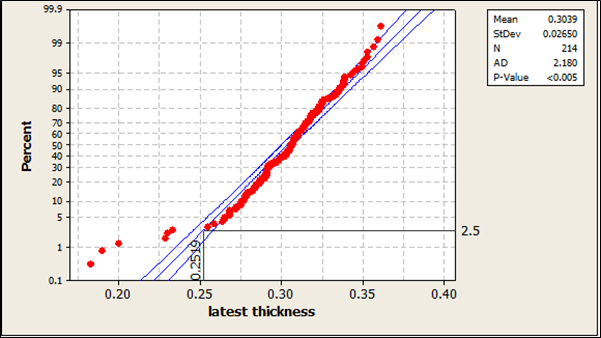 Utilizing a log-normal probability plot of the circuit data from the example above, it is easy to identify the higher corrosion rates (lowest remaning thickness) on the elbows from the example above.  Distribution analysis is the most common form of statistical analysis. If a normality test or probability plot is fit to the distribution of thickness data, this can confirm uniform corrosion.

In Figure 3, an AGO product line was analyzed. Sulfidation was suspected as the primary mechanism, and two sets of high effectiveness coverage had been performed. In review of the data, a cumulative probability plot was generated. The P-value of 0.375 is well above the 0.05 threshold to indicate a normal distribution fit. This indicates it is unlikely there are localized corrosion effects within the circuit, and thickness distribution is due to normal variability. 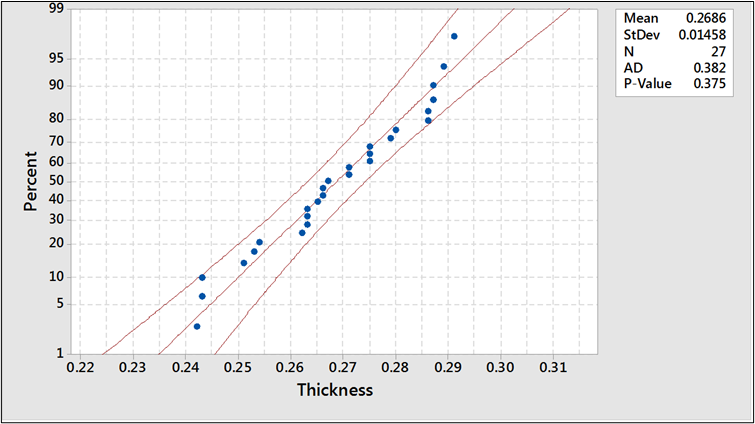 Another useful tool can be to compare sets of readings. In the example below, the readings are relatively parallel and the thickness difference between the average, 2.5 percentile, and 97.5 percentile are similar. Nonparallel distributions are often an indicator of localized corrosion, as the circuit is not corroding at the same rate throughout. 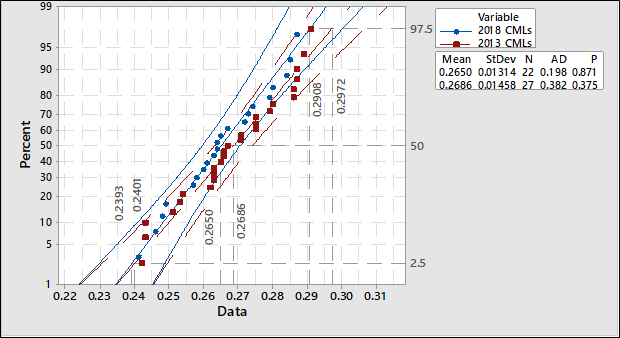 Another use case for statistical analysis of thickness data is to evaluate existing circuitization. If the statistical fit of data is poor and grouped in distinct regions, the circuit may not be properly circuitized, with two distinct damage mechanisms or rates occurring. Once identified, the analyst must work with the inspector and corrosion engineer to physically locate the suspect regions and determine if there is a damage mechanism or process break point which warrants creating separate circuits. If the suspect data is intermixed within a circuit, this is typically an indicator of localized corrosion.

Review of thickness data is essential to understanding your site’s mechanical integrity risk. As stated by John Reynolds in “The 101 Essential Elements of Pressure Equipment Integrity Management for the Hydrocarbon Process Industry,” make sure you are not just “feeding the beast.” The amount of data stored in an IDMS may be overwhelming, but it is a primary source of data showing the observed corrosion occurring in the system. We must listen to what it is saying.