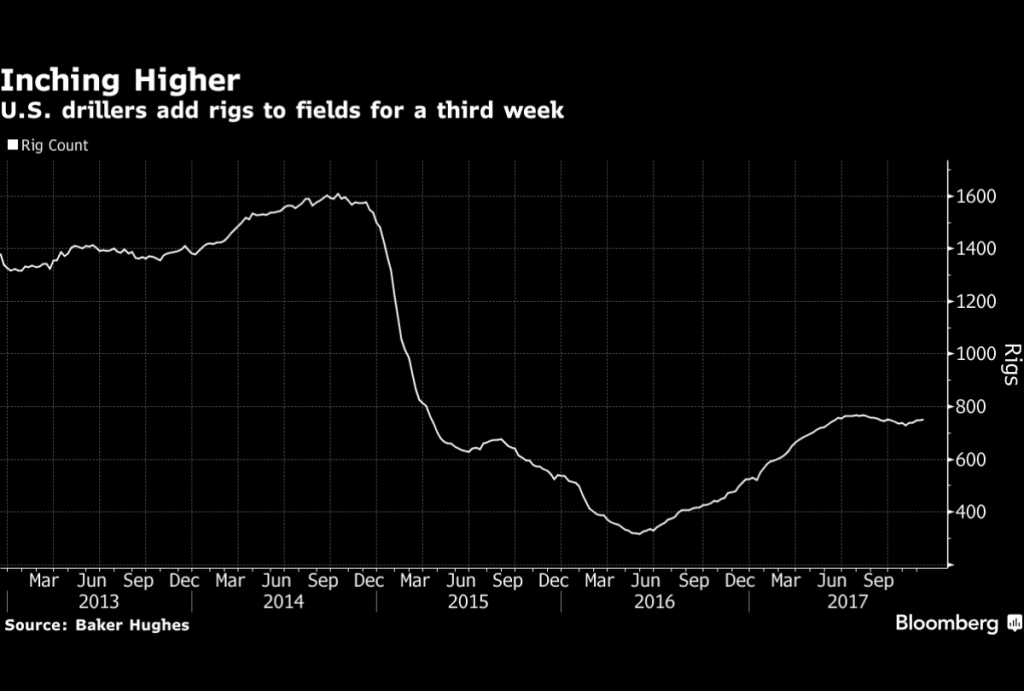 Oil held steady as U.S. drilling expanded and two OPEC nations signaled the group may phase out production cuts if the market improves by the middle of the year.

Futures were little changed in New York after climbing 2.5 percent the previous two sessions. Drillers boosted the rig count by two to 751, a three-month high, according to weekly Baker Hughes data Friday. Kuwait said Sunday that OPEC-led output curbs may end earlier than planned if the market balances by June.

While oil has been lackluster this month, it’s heading for a second yearly gain as the Organization of Petroleum Exporting Countries and its allies including Russia extend supply cuts through the end of 2018. The group may draft a strategy in June to end the curbs if the market is no longer oversupplied by then, the U.A.E.’s energy minister said Monday, while Kuwait indicated the cuts could end before 2019.

“If inventories fall a lot now, then the chance increases of OPEC phasing out cuts earlier than they have recently said,” said Jens Pedersen, a senior analyst at Danske Bank A/S. “The market is figuring out which stance to take on this. That said, it’s still a long way until the June review meeting.”

West Texas Intermediate for January delivery was at $57.52 a barrel on the New York Mercantile Exchange, up 16 cents, at 9:19 a.m. local time. Total volume traded was about 15 percent below the 100-day average. Prices earlier spiked to $57.62 as news broke of an explosion in New York.

Brent for February settlement gained 35 cents to $63.75 a barrel on the London-based ICE Futures Europe exchange. Prices slid 0.5 percent last week. The global benchmark traded at a premium of $6.10 to February WTI.

Russia is keen to end output cuts as early as possible,  Issam Almarzooq, the Kuwaiti oil minister who was  replaced on Monday, said in Kuwait City on Sunday. OPEC will study an exit strategy at its next meeting in June, and prices should remain near current levels in 2018, Almarzooq said.

Kuwait’s Almarzooq has been replaced as oil minister by Bakheet Al-Rashidi, who led the country’s international refining unit, according to a royal decree published by the nation’s official news agency KUNA. U.S. shale explorers have signaled they’re gearing up for a drilling surge next year as hedging rose for an eighth week to a record. While global oil-product inventories are rising, the small buildup will be offset by a decline in crude stockpiles, U.A.E. Energy Minister Suhail Al Mazrouei said at a conference in Kuwait. Goldman Sachs Group Inc. said Lower-48 U.S. crude-oil production will grow by 280,000 barrels a day in the fourth quarter from the third. Trafigura Group Ltd.’s full-year profit fell 9 percent to the lowest in seven years as a record performance by its metals and minerals business failed to offset weaker margins in oil trading.

Forties pipeline outage is a gift to U.S. oil exporters, others: Russell