The Badez 540 reservoir in the Gulf of Guinea has been in production for 22 years, and it’s critical to understand current reservoir dynamics and evaluate remaining hydrocarbon potential.

A re-modelling study of the Badez 540 reservoir was initiated to better understand its complex geology and reconcile 4D seismic observations, well and reservoir performance data.

While several vintages of previous modeling work exist, the existing models have not been able to replicate the complex geology and reservoir dynamics of the Badez 540 reservoir. This has made it difficult to articulate future reservoir management and infill development plans. In particular, it is unclear if proposed injector replacement with a cost profile of ~$100 million is a justified approach to maximize hydrocarbon recovery. The biggest challenge is the very high variability of the turbidite sand bodies which has made it difficult to generate a robust structural and stratigraphic framework. Net sand distribution and reservoir connectivity are the key subsurface uncertainties of the reservoir, which impact volumes and sweep efficiency during waterflood. Another key uncertainty is the connectivity understanding between Main and the North-West (NW) extension of Badez 540.

Geobody mapping was introduced as a new initiative to provide robust understanding of the internal reservoir architecture and waterflood sweep patterns as seen from 4D seismic data. The calibrated models were then used to validate the in-fill and by-passed opportunities in the Main block and provide justification for re-drilling the impaired injector in North-Western block to effectively support the existing producer.

The Badez 540 reservoir is the deepest and second most-prolific reservoir in the Badez field. The field is flanked by a large shale induced anticline in the Gulf of Guinea. Production in Badez 540 started in 2000 under depletion drive until 2003 when water injection was initiated to arrest declining pressure and improve recovery. Recent data including 4D seismic, production and new well data suggest communication pathways between reservoir compartments and water influx occurring outside model expectations.

The sands drape a substantial portion of the Badez Main Anticline with channel axis, fan lobe, channel margin and overbank facies interpreted to have been deposited. Late phase bypass channels eroded the 540 sands and were mud-filled on abandonment. These mud-filled channels locally cut deep enough to form baffles and barriers which, along with faults, compartmentalize the 540 reservoir. In practically all 540 main wells, a subdivision can be made into an upper and lower part of the reservoir, separated by a shalier interval. The 540 reservoir is subdivided into five fault and/or baffle-barrier bounded regions, each potentially developed by a producer/injector well-pair.

It is possible that channel drape facies on the bounding channel belts and poor connectivity between more isolated channel sands could act as flow barriers inhibiting effective sweep from injectors to producers. As such, connectivity and sweep remain key uncertainties in development of the 540 reservoir, making it critical to understand the connectivity of the geobodies for proper placement of injector / producer pairs in the same channels in the different regions. A North-West extension of the 540 reservoir is separated from the main block by a major fault of up to ca. 200 ft throw.

A comprehensive data and uncertainty analysis phase was carried out integrating all available data and provided valuable insights for the detailed static modeling. Based on the uncertainty analysis, net sand distribution and reservoir connectivity are the key subsurface uncertainties of the reservoir, which impact volumes and sweep efficiency during waterflood.

Geobody mapping was introduced as a new initiative to adequately capture the internal reservoir architecture, providing improved understanding on sand connectivity, sand body geometry and lateral extent. This was combined with additional advanced techniques like spectral decomposition, providing map and three-dimensional views of discrete sections of the seismic frequency spectrum with greater insight into depositional architecture, lithology and pore fill.

This approach enabled a robust static definition of the reservoir and successfully unraveled the structural and stratigraphic complexity of the reservoir. The static models were successfully history matched, and the resultant dynamic models honored historical production, injection and pressure data, unlike previous iterations. The models were also validated with 4D seismic data which was used as additional calibration.

The understanding from the geo-body mapping (using seismic inversion volumes flattened on major events) gave a clearer understanding of the reservoir geology – sand-body geometries and connectivity. The iterative extraction of seismic attributes to map geo-bodies together with production and pressure data at well positions provided insights on the connectivity of the geobodies.

Figure 2 shows the implementation of seismic constraints in the model. The polygons show the proposed units of flow for the dynamically connected geobodies:

Figure 2: Implementation of Seismic Constraints in the Model

Connectivity uncertainty between Main and NW was resolved with the use of pre and post MDT data, Pressures, static BHP and fault juxtaposition study. The NW wells were found depleted by c.a. 350psi compared with initial measured pressure in the Main, thereby suggesting high likelihood of pressure communication and formation of secondary gas cap. MDT pressure from NW was similar to post-production measured data from Main. Also, early post-production pressures from the NW producer were well aligned with that of two wells in the Main block to further confirm pressure communication among Main and NW Wells. 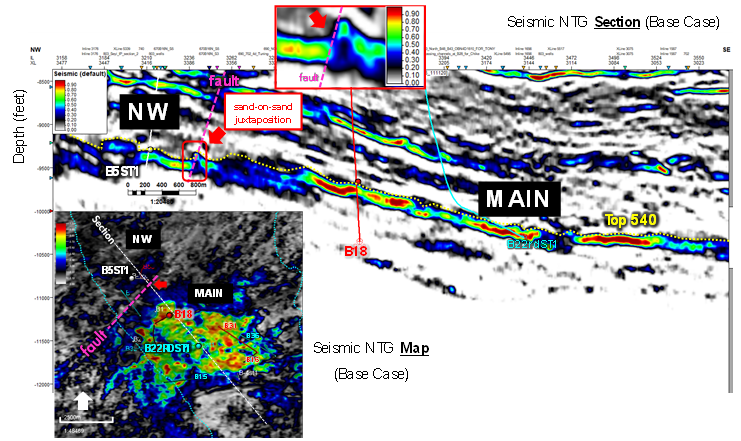 In NW, there is a plan to re-drill the injector to pair with existing producers. Detailed study has been carried out to understand potential impact of the observed geological barriers (two dims from seismic image) between producer and injector geobodies. The uncertainty has been assessed with associated risk found to be moderate. In addition to sweep, the NW injector will be required to maintain pressure, without which, the producer will continue to produce intermittently at a low rate or shut-in due to high GOR. From the prediction result, the potential risk reward associated with injector redrill is ~8 million barrels.

The static and dynamic models which have been built adequately capture the identified subsurface uncertainties to support future development and reservoir management. The Geobody mapping carried out helped in the understanding of the waterflood sweep patterns as seen from 4D seismic data.

The calibrated models have been used to validate the in-fill and by-pass opportunities in the main reservoir block and validate the value of re-drilling the existing injector well in the North-West extension to adequately support the single producer. It also provided valuable insights into the benefits and trade-offs for the injector replacement, with the selection of best value go-forward concept with risked reward of ~ 8 million barrels and upside potential from other connected geobodies.

Oladipo Falade has 20 years oil and gas industry experience in integrated reservoir studies, field development planning, hydrocarbon maturation, well delivery and execution, wells and reservoir management, strategy and business planning. He has served in a wide variety of specialized technical and leadership positions across Africa and the Middle East and is currently Shell’s Deepwater Project Lead for Nigeria, in charge of delivering the frontend opportunity maturation for multiple deepwater flagship projects. He is an active member of several major international professional organizations, including the Society of Petroleum Engineers (SPE); the American Association of Petroleum Geologists (AAPG); and the Nigerian Association of Petroleum Explorationists (NAPE).