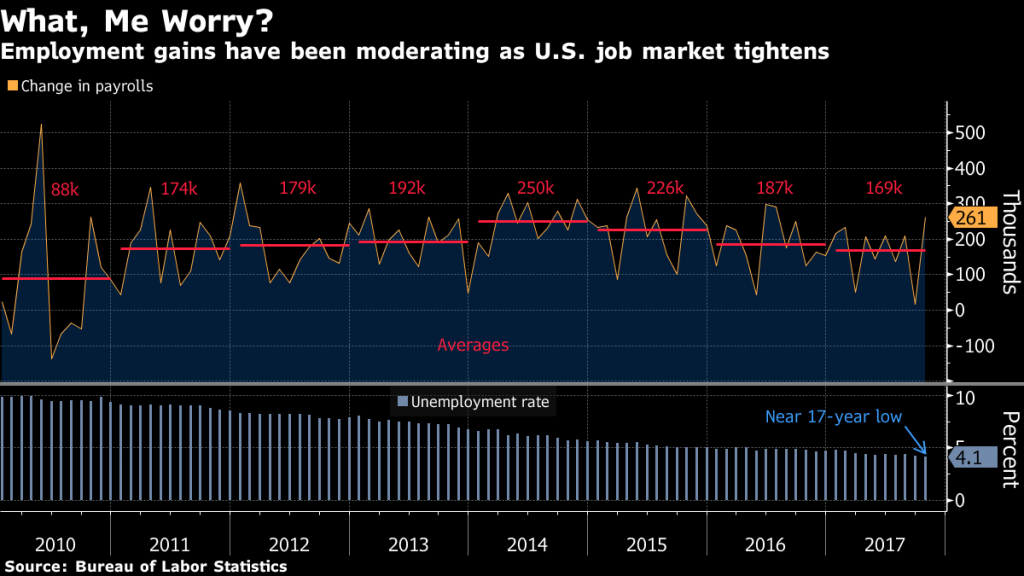 (Bloomberg) — U.S. stocks rose as investors evaluated the outlook for a final tax bill while the dollar advanced for a fourth day and oil rebounded from its worst selloff in two months.

The S&P 500 ended a four-day losing streak, with industrial and consumer discretionary shares among the best performers in a modest but broad rally that saw two stocks gain for every one that dropped. Gold fell to a four-month low. The pound jumped on speculation that Ireland and Britain were close to a Brexit deal. Brazil’s real and stocks tumbled amid growing skepticism a pension overhaul will be passed this year.

Stocks resumed their runup tied to speculation that the U.S. tax overhaul will boost corporate profits. That follows a few days in which the markets drifted as investors awaited the details of a final bill. Focus has also started to turn to efforts to avert a U.S. government shutdown at the end of the week. Senate Majority Leader Mitch McConnell named eight Republican lawmakers to be part of the conference committee responsible for negotiating a final tax bill with GOP House lawmakers.

“Stock-market investors are nervous right now,” Matthew Litfin, a portfolio manager at Columbia Threadneedle Investments who helps oversee $473 billion in assets, said by email. “Looking ahead into 2018, the tailwind of global earnings growth is strong, U.S. corporate tax rates are probably going to be lower, and investors likely will still be in the mood to take on risk.”

Elsewhere, West Texas oil rose past $56 a barrel after falling the most in two months on Wednesday. The Australian dollar dropped to the lowest since June after trade data missed estimates. European equities were little changed. Asian equities were mixed, with stocks rising in Japan, Hong Kong and Australia and falling in China and South Korea.

Terminal customers can read more in our Markets Live blog.

Here are some of the key events facing markets in the coming days:

The U.S. faces a partial government shutdown after money runs out on Dec. 8 if Congress can’t agree on a spending bill by then. U.S. employers probably hired at a robust pace in November as the unemployment rate held at an almost 17-year low. The Labor Department’s jobs report Friday may also show a bump up in average hourly earnings. Theresa May will present draft wording on the Irish border as soon as Thursday.And these are the main moves in markets:

Why It’s So Hard to Find Bargains in America’s Pipelines: Gadfly