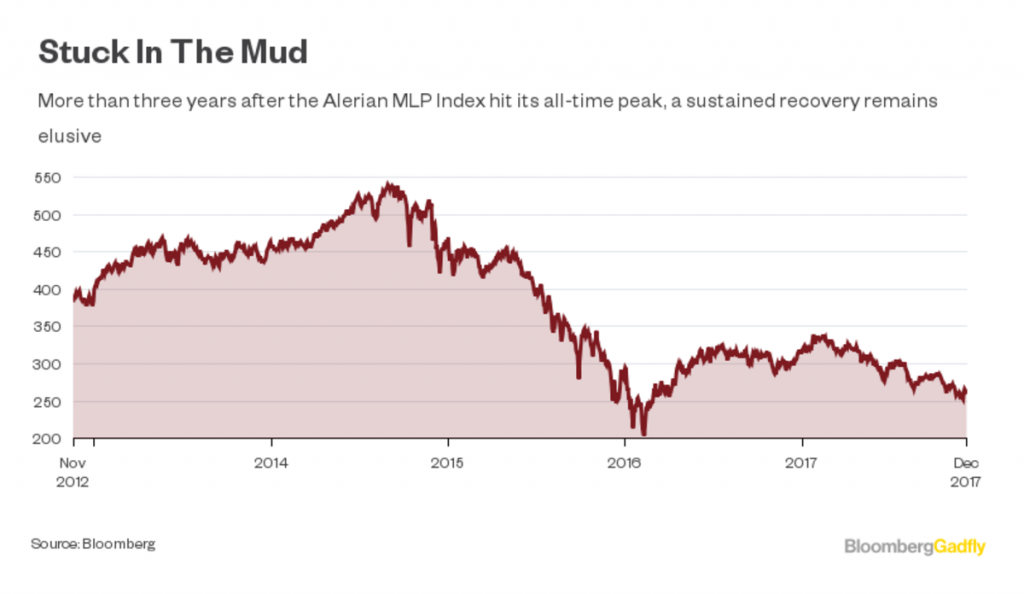 (Bloomberg Gadfly) — In theory, America’s pipelines sector should be a candy store for value investors.

The benchmark Alerian MLP Index remains 52 percent below its August 2014 peak and yields a heady 8.3 percent. Oil prices, while nowhere near the levels of three years ago, have stabilized, and this year should be the first since 2013 in which the average price increased. Plus, U.S. oil and gas production and exports continue to rise, meaning more demand for space on pipelines and other infrastructure.

Yet even Warren Buffett, with his famously sweet tooth, hasn’t found the industry especially tempting. In late 2015, as the energy crash entered its darkest phase, Berkshire Hathaway Inc. took a stake in Kinder Morgan Inc. (which is no longer a master limited partnership, and therefore not in the Alerian index, but still tends to trade closely with it), sparking a rally in the stock. Within a year, though, Buffett was gone; an unusually quick exit.

Since then, Kinder Morgan’s stock has remained lifeless despite some progress on paying off its debts and even the announcement of a 60 percent dividend increase and a promised $2 billion buyback:

Part of the problem is that, even if Kinder Morgan is doing the right things in terms of reducing leverage, success here is measured in increments. Guidance given earlier this week aims for net debt to fall to 5.1 times Ebitda by the end of 2018 — which is helpful but illustrates the slow nature of recovery after years of excess:

With Kinder Morgan budgeting $500 million of excess cash in 2018, the bulk of its buybacks will come in 2019 at the earliest. Ebitda is forecast to increase by less than 5 percent a year on average through 2020, according to consensus estimates compiled by Bloomberg, so it will take time for Kinder Morgan to grow its way back into investors’ hearts.

Yet this is the natural corollary of the other thing investors demand; namely, that pipeline firms stop relying so heavily on external funding. The old model where companies splurged on new projects (or deals) and jacked up dividends, only to dilute investors on the back end by issuing ever more units or stock, has fallen deeply out of favor.

This gets to a wider issue in trying to pick oversold pipeline companies. Kinder Morgan has at least embraced a self-funding strategy and is no longer an MLP. For the wider MLP universe, there is an inherent impediment to value investing.

Remember that MLPs are just a means of raising capital to fund investment in energy infrastructure. And their stewardship of that capital hasn’t been outstanding. According to a presentation by Wells Fargo, which hosted a conference on the sector this week, the industry invested $326 billion between 2011 and 2015, earning a cash return of just 7 percent — less than its cost of capital.

As I wrote here, when MLPs are so out of favor that their yields — read: cost of equity — have become too expensive, their ability to live up to that basic reason for being is severely impaired. So when you see an MLP with an insanely attractive yield, you’re also looking at a company whose cash payouts and funding mechanisms (and probably leverage) are seriously out of whack. That makes it harder to get back on track without inflicting further pain in the form of dividend cuts or curtailing growth plans. As it stands, a third of the Alerian index’s members still yield north of 10 percent.

Some companies, notably Enterprise Products Partners LP, have recognized the issue publicly and reset expectations on growth and dividends at slower, but more sustainable levels. Because while, at a macro level, U.S. oil and gas production is rising, that growth is concentrated in a few geographical areas. So competition to serve it is intense, especially after the previous construction binge.

This tension between yearning for growth but trying to be sensible with balance sheets is keeping the sector in limbo. Those seeking bargains will need more patience than even Buffett had.