Most European nations are keen to quit buying Russian natural gas. The required shift in energy sourcing is staggering. EU nations imported about 40% of their natural gas, nearly half of their coal and more than one-quarter of their oil from Russia in 2019. The value of these Russian energy imports at the higher 2022 prices is almost US$1 billion daily.

Europe can wean itself from Russian natural gas. Still, it’s a daunting task that will take a few years, even in this energy-insecure environment where politicians are under extreme pressure to make decisions and are being pushed to abandon magical thinking to address climate change.

The benefits of eliminating or at least substantially reducing Russia as a supplier include:

European nations can also use this crisis to improve their energy:

While the specific responses each European nation will embark on are still emerging, we can be sure that:

How big is the problem of eliminating Russian natural gas?

The problem by volume is enormous. It makes maintaining the commitment of various NATO members to sanctions and supplying military aid to Ukraine challenging.

Suppose Russia chooses to cut natural gas supplies to European countries in retaliation for sanctions and military support for Ukraine. In that case, Germany, Italy and the Netherlands will be the most impacted European countries. This reality explains the initial hesitancy Germany showed in supplying weapons to Ukraine. Source: How reliant is the world on Russia for oil and gas? 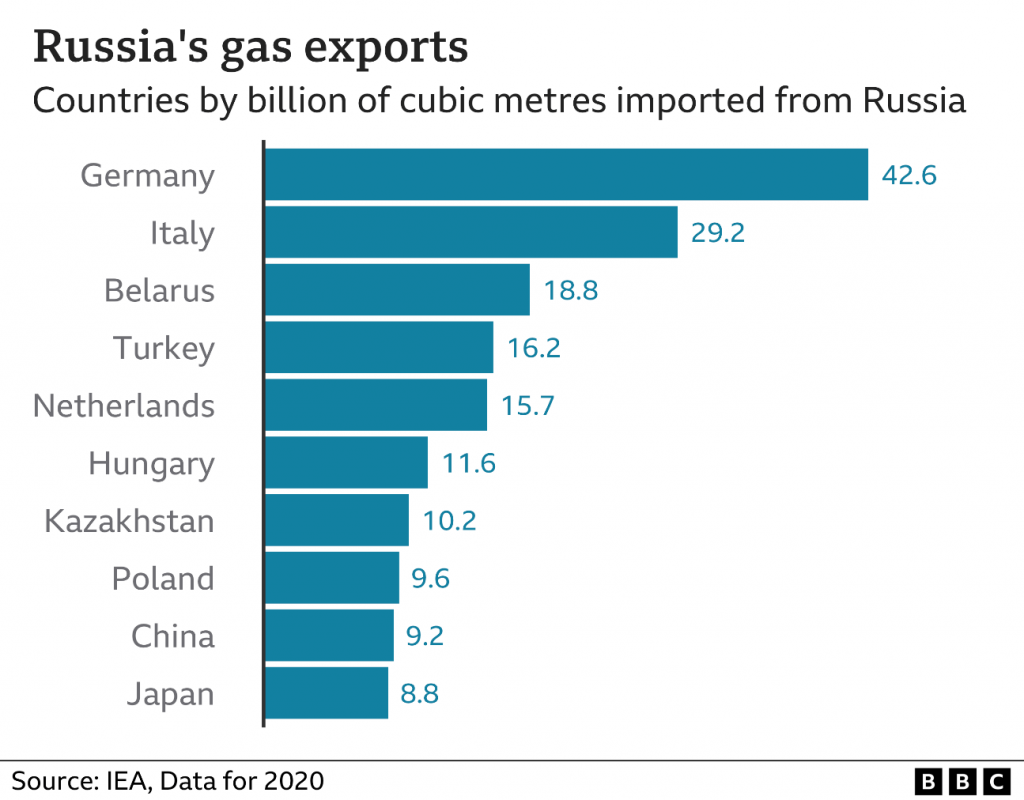 How significant is European dependence on Russian natural gas?

European countries face widely varying difficulties in weaning off Russian natural gas the based on: The body of the chart at the left illustrates the difficulty by country on a percent of natural gas consumption. Austria, the first country to buy natural gas from Russia decades ago, and several other countries depend highly on Russia.

The countries with the most significant problem on a percent of total energy consumption basis are Hungary, Italy, Netherlands and Britain. Source: How will Europe cope if Russia cuts off its gas?

In most cases, the easiest way to replace Russian natural gas is through additional LNG imports. Fortunately, Italy, Netherlands and Britain have long coastlines to locate such facilities.

What are the strategies for reducing European dependence on Russian natural gas?

The strategies to reduce or eliminate Russian natural gas from the energy supply mix of a European country include:

Unfortunately for the environment, the only immediate response to reduced supplies of Russian natural gas is to consume more coal.

The European Union committed itself to a 20% reduction of energy consumption by the year 2020 compared to baseline projections. The chart below shows that the countries have achieved only half the target. Source: Eurostat Energy efficiency statistics. 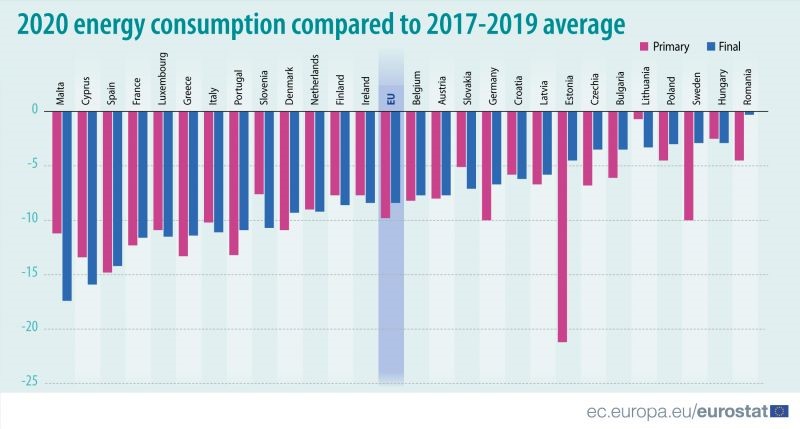 The new goal to dramatically reduce or eliminate Russian natural gas will be an added incentive to accelerate efforts to build more energy infrastructure and increase energy efficiency.

Which European countries have plans to shift?

The difficulty of weaning off Russian natural gas varies widely across European countries based on how actively they have pursued the energy transition to renewable energy sources. 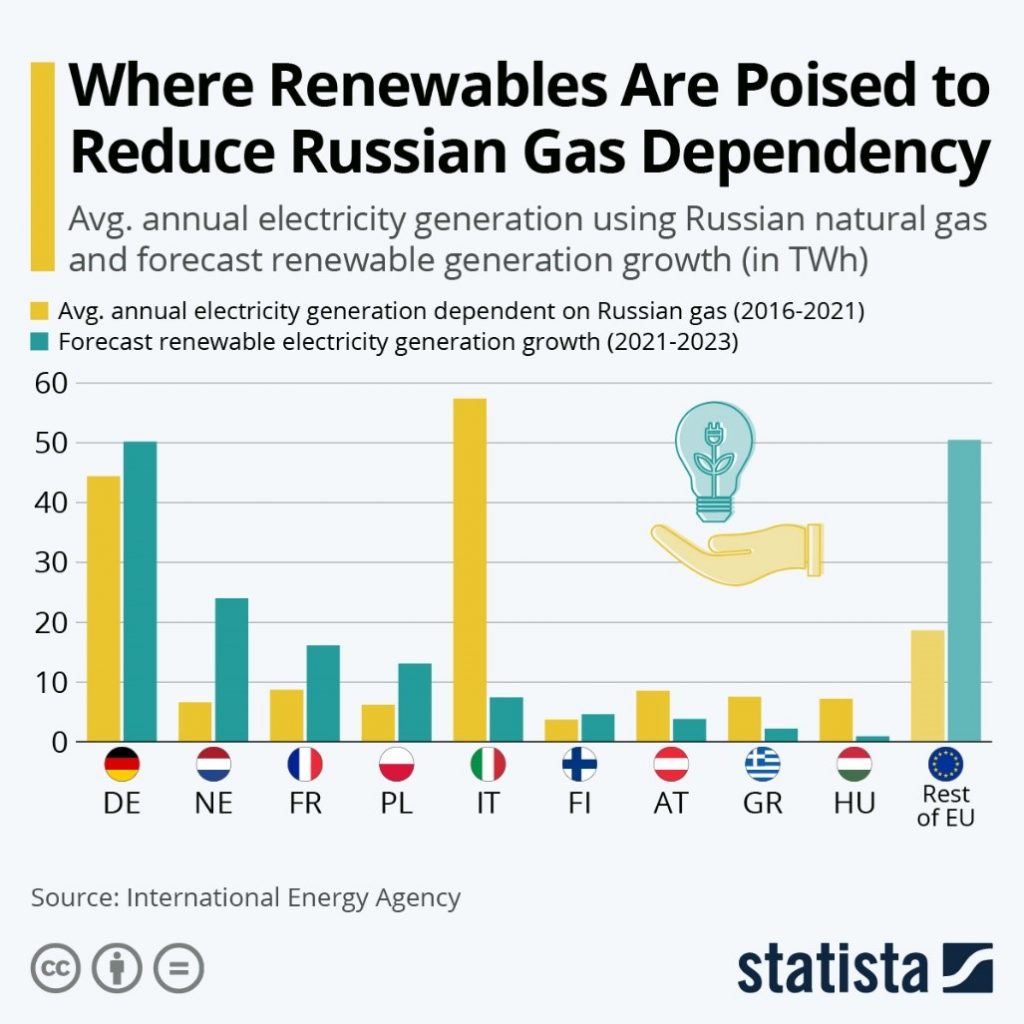 The chart above compares how dependent each country is currently on Russian natural gas compared to their plans for adding renewable generation capacity. Source: Where Renewables Are Poised to Reduce Russian Gas Dependency

Over the next five years, Germany, Netherlands, France and Poland can wean off Russian natural gas. Based on current plans, Italy, Finland, Austria, Greece, and Hungary will experience great difficulty.

This chart also shows that the remaining countries’ plans far exceed their needs. That situation creates an opportunity to improve electricity resilience by sharing through new transmission lines.

How did Europe become dependent on Russian natural gas?

During the past 50 years, European nations have significantly increased their natural gas consumption while the local production, mainly from the North Sea, slowly decreased, as illustrated in the chart below. This supply-demand gap led to significant imports from Russia and other regions. Source: High Energy Prices – Russia Fights Back?