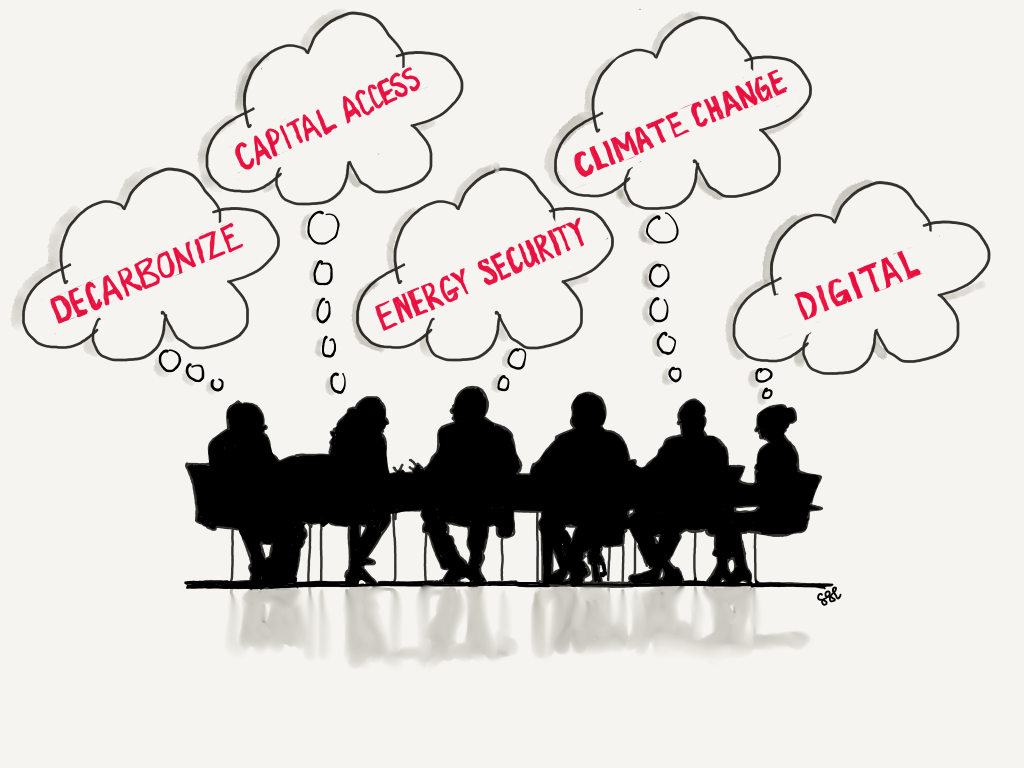 The world’s energy context has suddenly changed. The pandemic and the invasion of Ukraine are thrusting energy security onto a crowded energy transition agenda and triggering fresh strategy challenges.

This article is co-authored with David Smethurst, a great friend and fellow energy executive.

We have both worked extensively in global energy markets, a valued privilege in the sector. My experience include a lengthy tour of duty in Australia serving the liquefied natural gas (LNG) sector while that country was building its global natural gas export industry, and David served as an executive with one of the world’s largest suppliers of industrial technology to global energy companies. We have benefited from these long term relationships and connections with voices in the industry beyond the shores of North America.

For the past ten years or so, the global energy industry has been dealing with a common set of structural challenges.

Rising atmospheric levels of greenhouse gases have spurred governments and regulators to find ways to promote the decarbonization of energy. Carbon taxes, cap and trade systems, bans on fossil fuel transportation, and other regulatory mechanisms have helped fuel this shift. In polls, consumers in developed economies such as the US typically rate the environment as a top concern.

More sustainable energy, such as solar, wind, geothermal, and tidal have benefitted from steady investment, falling costs and improving reliability. Given the option, power utilities everywhere are able to replace their coal power plants with renewable alternatives, particularly at the margin to deal with growth. This is clearly a challenge for resources companies and economies with balance sheets weighed down by undeveloped fossil fuels. As was highlighted at the World Petroleum Congress in 2021, energy producers sense that hydrogen, produced from natural gas or renewable energy, is likely more economical than full transition to renewable energy and eventually electrification.

Digital innovations, including the internet of things, cloud computing, machine learning and data science, have upended many industries, and have proven their worth during the pandemic to energy companies. Gains of 20% or better in both cost and productivity are now routine, and entirely new business models are emerging.

At the same time that the energy industry is facing a massive wave of retirement from its ranks, the largest sub segment of energy (namely fossil fuels) has been socially demonized, implying that it is a career dead end, and starving the sector of new talent. Universities report declining enrolments in petroleum studies, a trend that is very hard to reverse. In response to digital pressures, many secondary educational institutions are revising curriculums to include digital content, and creating micro-credentials to help students grasp such concepts as “Industry 4.0”, “circular and digital economy”, and their application in energy.

Capital markets have tightened their expectations for proper financial returns on the ten percent of global oil and gas supply that is enabled by fracking and horizontal drilling. This segment had a free pass from financial discipline during the go-go years of cheap capital and originates almost entirely from North America. Many strategic investors, such as large sovereign wealth funds, pension funds and endowments, either avoid the industry altogether, or demand disclosures about technology adoption, asset risk or environmental performance. Activists succeed in getting alternative directors on boards to press for change.

Some leading investors do recognize the role that capital plays in driving energy diversification. Blackrock Ventures maintains that 100% divestment from oil and gas will not help solve climate change. Society needs to still invest in oil and gas because it is the energy industry itself that can help rapidly decarbonize.

2020 introduced a new problem, the pandemic, which pushed global economies rapidly and simultaneously into recession, depressed demand for energy, and forced change on the industry. Societies are crawling back from the depths of lockdowns, and demand is now surging.

Energy price escalation is a sure sign of energy shortages, and energy prices are on a tear globally. Oil prices have climbed to eye-watering levels, gas prices in Europe are at historic highs, and LNG pricing in Asia has been exceptionally strong (above $20/mmbtu) since mid 2021. For politicians, energy security is deeply worrying as rapid energy price changes and interruptions in energy supply give rise to domestic instability.

Europe also risks being cut off from one of its biggest sources of natural gas, which flows from Russia via pipeline to the large developed European economies. This is not an idle or hysterical possibility. In 2020, about 29% of gas supply for Europe came from Russian pipelines, and gas storage assets are not adequate to make up for any protracted shortfall. Russia has cut off gas supplies that transit through Ukraine several times in the past (2005, 2007, 2008, 2014, and 2015) leading to painful energy shortfalls in Ukraine and Europe.

It seems the world energy context has permanently changed. The war in Ukraine, and the impacts of the pandemic, have resulted in two major observations.

Policy makers and politicians now see Energy Security is the first priority, followed by Energy Transition, Digital Transformation, Journey to Net Zero/ESG, and last is Climate Change. This change in priority might prove to be a better position to manage climate objectives (COP 26 notwithstanding) when the first four areas of focus have truly gained traction in the world of energy.

What is Energy Security?

A nation’s energy security is a function of its self-sufficiency in energy supply (the degree by which domestic energy production satisfies domestic demand), and supply diversity (the number of reliable import suppliers of energy).

Indexes such as the Shannon-Weiner-Neumann index (or SWNI) provide an objective way to measure supply diversity. A parallel is how a company might measure its dependence on one or two very large customers. If you’re going to be reliant on external suppliers, the key is to diversify your supply to spread your risk and create optionality.

Even countries like the US and Canada, who are rich in energy sources and energy exporters, may simultaneously be importers. For example, North America’s eastern seaboard markets are typically purchasing crude oil from global suppliers rather than domestic supply via pipelines.

Energy security is a permanent and important topic for big developed economies (such as Korea, Japan, Taiwan, and Singapore) which have few natural resources and near zero domestic fossil fuel supply. They are wholly reliant on their ability to import. India’s domestic supply also falls well short of demand, and China is the world’s biggest importer of crude oil and natural gas.

Asian buyers of energy are well practiced in achieving diversity of supply. Oil, coal, and LNG are contracted from a variety of sources, and Asian gas utilities are frequent investors in coal and gas export projects.

Europeans now find themselves inconveniently locked into gas supply that is overly concentrated with a single nuclear-armed supplier who is at war with a nation at their border. The supplier is still ‘reliable’ in that gas supply has not been disrupted yet, but the supplier has also repeatedly cut off gas supply in the recent past for commercial reasons. Who knows what will happen in a war setting.

Reacting to energy security issues is fraught because energy asset investments take time to put into place. Investment agendas don’t change on a whim. But equally, energy companies and energy exporters are going to be under considerable pressure to rebalance their agendas to take into account the opportunities presented by energy security considerations. For example, Shell and BP have both stated their intent to exit Russia, which begs the question of how they will meet their financial goals this year. The same question is now facing the international services companies. Gazprom’s UK business looks at risk as the UK market abandons doing business with Russian firms.

Many strategic capital questions are now on the table:

Just to illustrate the point, consider the renewed debate about a cross-border pipeline project between Canada and the US. The US is resisting calls to increase energy supply from Canada as a way of offsetting American imports of Russian crude. The displaced Russian volumes might be 500,000 barrels per day, but are likely in demand along the US eastern seaboard market, whereas the pipeline discharges on the Gulf coast where the refineries are configured to process heavy sour crude. More Canadian oil doesn’t neatly solve for the Russian shortfall.

US energy security professionals know that once built, pipeline infrastructure demands to be used so that it generates a return to its investors. A new pipeline also serves to dampen domestic interest in expanding indigenous supply as well as to depress investments in alternative sources of energy and clean technology. Large fossil fuel energy projects are very challenging to abandon because they create dependency and they are long contracted to secure funding. Expanding US pipeline imports looks well offside from the present administration’s environmental goals.

Meanwhile, the US has plenty of its own undeveloped oil resources, and in light of Europe’s newly revealed energy supply risk, energy security means promoting as much energy self sufficiency as possible, and shoring up its internal market, before tackling energy import diversity. It’s also in the US interest to be seen as a key partner to Europe to address energy security, and it’s in Europe’s interest to encourage the Americans where they can.

As an aside, Canada has occasionally revealed its own weaknesses concerning the country’s domestic energy supply, let alone stepping up to its role as a potential reliable energy supplier to the world. A federal conservative government effectively banned international takeovers of Canadian energy companies. A federal liberal government halted crude oil shipping off the coasts, then purchased an oil export pipeline to the coast. Various provincial governments have stymied internal pipeline projects aimed at improving Canada’s domestic self sufficiency, blocked LNG projects, and have frustrated pipeline projects to bring Canadian energy to global markets. The most recent gas pipeline project has been the site of violent nighttime attacks.

Energy priorities, including decarbonization, energy diversification, and now energy security, create a multifaceted urgency that requires exceptional leadership from industry and governments. The successful proponents in this new complex world will collaborate and establish solidarity around managing expectations to make any progress in reducing climate change.

Check out my book, ‘Bits, Bytes, and Barrels: The Digital Transformation of Oil and Gas’, , and available on Amazon and other on-line bookshops.

Reduce the life cycle duration of manifests through technology-Payload: eManifest