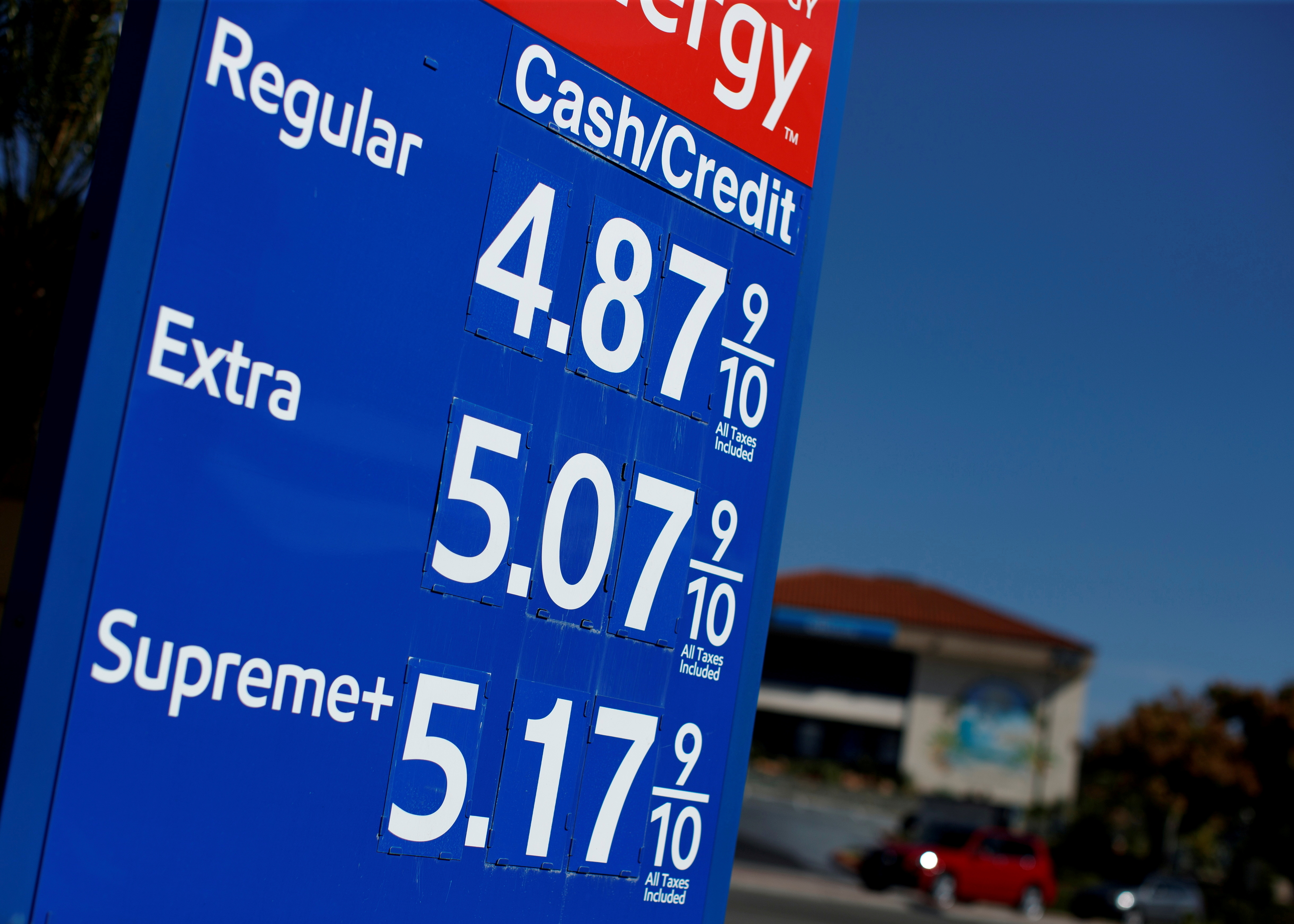 Gas prices grow along with inflation as this sign at a gas station shows in San Diego, California, U.S. November, 9, 2021. REUTERS/Mike Blake/File Photo

The efforts may have limited impact on prices at the pump, experts say, but doing nothing would be a political mistake as gasoline prices hit a seven-year high.

The average U.S. retail gasoline price is $3.41 a gallon, up from $2.11 a year ago, according to the American Automobile Association.

Americans are by far the world’s heaviest consumers of gasoline, thanks to big cars, long driving distances and little public transportation in many areas.

“Americans expect the president to do something about this,” said Larry Sabato, political scientist at the University of Virginia. “We need to have a national conversation about the law of supply and demand.”

“Inflation is so cutting, and can really destroy a presidency,” Sabato added, citing Gerald Ford and Jimmy Carter, who both tried unsuccessfully to encourage Americans to curb gasoline consumption as prices jumped.

American purchases of bigger sport utility vehicles and trucks, which have lower fuel efficiency, have jumped in recent years, suggesting gasoline prices will be a political issue for years to come.

U.S. consumers use more gasoline per person than any other country in the world at nearly 1.2 gallons (5.5 litres) per day, according to calculations by Global Petrol Prices, 10 times the rate of China and many European countries. Those figures do not include diesel fuel. Including diesel would increase European fuel consumption by about 20%, the research group’s economist, Neven Valev, estimates.

Biden’s approval ratings recently slipped to the lowest they have been all year, Reuters/Ipsos polling shows, with just 44% of Americans approving of his job performance. His Democrats face midterm elections in November 2022 when they will try to maintain their slim congressional majorities.

Americans’ top issue of concern is the economy, the poll shows, as it has been for 11 weeks.

Stock markets are at record highs, manufacturing is surging and employment has returned to nearly pre-pandemic levels. But consumer costs rose the most in 31 years in October, thanks in big part to high gasoline prices.

Crude oil accounts for more than half the cost of a retail gallon of gasoline, with taxes an additional 15% or so. The Organization of the Petroleum Exporting Countries still has 3.8 million barrels per day in supply cuts from last year that it has not returned to the market.

Since the OPEC oil embargo of 1973-1974, U.S. presidents have struggled at some point with rising gasoline prices, often with little control over the crises abroad that usually are the underlying cause.

Richard Nixon was president during the world’s first oil shock – a dramatic increase in pump prices in 1973 when OPEC nations decided to punish the United States and other countries for supporting Israel during the Yom Kippur War.

“It had a devastating effect on Nixon’s overall standing, which was already weakened by Watergate,” said presidential historian Thomas Alan Schwartz. “He tried to rally the country around energy independence. That didn’t work.”

When Ford took over as president on the resignation of Nixon, the Republican faced inflation of 12.3%.

His “Whip Inflation Now,” campaign featuring WIN buttons, T-shirts and coffee cups, urged Americans to fight high fuel prices by carpooling and turning down thermostats. It was viewed as a political disaster, and he lost to Carter, a Democrat, in the 1976 election.

Carter also tried to encourage Americans to wean themselves from OPEC through conservation. But after a second major oil shock in 1979, when the Iranian revolution took place and production plummeted, he faced rising prices and long lines at gasoline stations. He lost his bid for re-election to Republican Ronald Reagan.

Oil prices jumped to $140 per barrel and pump prices to $4 a gallon during Republican George W. Bush’s second term. With the onset of the Great Recession in late 2007, his approval rating sank to 25%.

The White House has also redoubled pressure on big gasoline refiners, slowing down mergers in the oil and gas industry and asking the Federal Trade Commission to investigate possible anti-competitive behavior – something others have tried.

“There is a long history that says that these are frequently used political gestures,” said former FTC Chairman William Kovacic. “The consequence of these inquiries is futile.”

Bush and his Democratic successor, Barack Obama, called on the Federal Trade Commission to investigate gasoline price rises that occurred after Hurricane Katrina and Rita in 2005 and the economic recovery following the 2007-2009 recession.

In Biden’s case, “there may be something to his claims,” Jack Ablin, chief investment officer at Cresset, an investment firm, wrote last week. “Gasoline prices are 34 cents higher than what can explained by crude oil prices.”