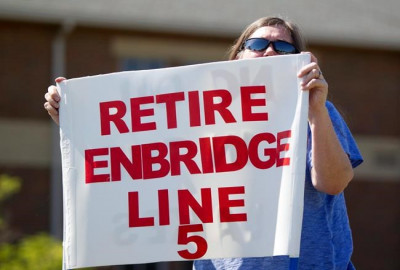 WASHINGTON — Opponents of Line 5 want the White House to reject Canada’s bilateral effort to prevent a Michigan judge from shutting down the cross-border pipeline.

Canada has formally requested negotiations with the U.S. under the terms of a 1977 treaty that specifically deals with the bilateral transmission of energy.

Environmental groups, however, call the gambit an “audacious” and misleading attack on American sovereignty.

A coalition dedicated to the shutdown of Line 5 is delivering petitions to members of Congress and the White House, urging them to side with Michigan Gov. Gretchen Whitmer.

Whitmer’s government is locked in a court dispute with Calgary-based Enbridge Inc. over the pipeline, which traverses the Great Lakes beneath the Straits of Mackinac.

Lawyers for the state argued last week that Canada’s decision does not require the court to put the case on hold.