LONDON, Sept 28 (Reuters) – Oil demand will grow sharply in the next few years as economies recover from the pandemic, OPEC forecast on Tuesday, adding that the world needs to keep investing in production to avert a crunch despite an energy transition.

The view from the Organization of the Petroleum Exporting Countries contrasts with that of the International Energy Agency, which in a May report said investors should not fund new oil projects if the world wants to reach net zero emissions.

“Energy and oil demand have picked up significantly in 2021 after the massive drop in 2020,” OPEC Secretary General Mohammad Barkindo wrote in the foreword to the report. “Continued expansion is forecast for the longer term.”

With oil demand recovering, OPEC and its allies such as Russia – a grouping known as OPEC+ – are unwinding record supply cuts made last year. But there are signs some OPEC+ producers are unable to pump more due in part to a lack of investment, and that has boosted prices.

OPEC also lowered its estimates for longer-term oil demand, citing changes to consumer behaviour brought about by the pandemic and competition from electric cars. Global demand is expected to plateau after 2035, the report said. 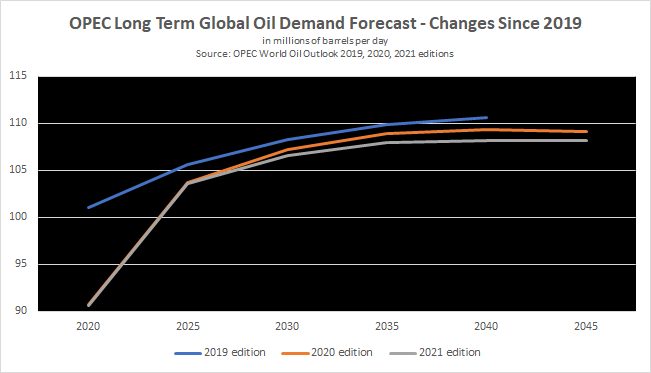 Assuming a faster take-up of existing technology, the Accelerated Policy and Technology Scenario, demand could be falling by the 2030s, according to an OPEC chart showing a more pronounced demand drop-off than a similar chart last year.

“Tele/homeworking is becoming a norm for many companies as a result of the pandemic,” OPEC said.

“Long-term oil demand growth will be limited by growing penetration of electric vehicles.” 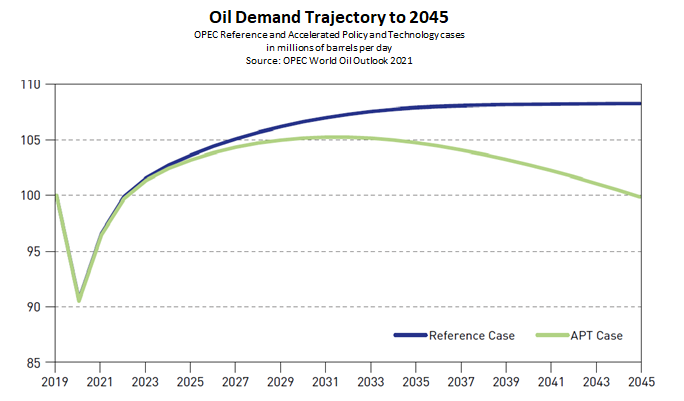 With demand recovering, those barrels are being returned to the market but OPEC said it was essential to step up investment in supplies to avert a future crunch.

Last year upstream oil capital spending dropped by nearly 30% to about $240 billion due to the pandemic.

“It is clear that underinvestment remains one of the great challenges for the oil industry,” Barkindo wrote. “Without the necessary investments, there is the potential for further volatility and a future energy shortfall.”

OPEC sees the demand for its oil rising in the next few years, but rising supply from the United States and other outside producers means OPEC output in 2026 will likely be 34.1 million bpd, below 2019’s level, it said.

The group shifted last year to acknowledging demand would peak one day, after predicting growth for years. This year’s 2045 demand forecast was trimmed to 108.2 million bpd, down 900,000 bpd from last year.

Still, OPEC is upbeat about its future prospects, seeing its market share rising in later decades as competition from non-OPEC producers will wane. OPEC expects U.S. tight oil output, another term for shale, to peak around 2030.

“Oil is still expected to retain its number one position in the energy mix,” Barkindo wrote.