Sept 14 (Reuters) – U.S. energy producers have cut so deeply into a once-large reserve of oil wells waiting to be turned on they soon may have to resume drilling to keep production from sagging, executives and analysts said.

This would mean an increase in spending which could unsettle investors who have benefited from shale companies’ recent prioritization of shareholder returns over ramping up production.

Investors, frustrated with years of low returns from the sector, have punished companies that have looked to grow production at the expense of shareholder return and rewarded those that have shown capital discipline.

Drilling new wells could add to supply at a time when oil is selling for $70 per barrel, a profitable level for U.S. shale and OPEC producers alike.

Those high prices, hurricane shut-ins at U.S. offshore wells and a rapidly shrinking backlog of drilled-but-uncompleted shale wells may spur producers to restart drilling and test their pledge to keep spending flat.

The backlog of shale wells waiting to be turned on has fallen sharply, the latest U.S. data shows, shrinking a reserve that allowed companies to maintain output without spending more.

Some executives say more shale will be needed to offset normal production declines and hurricane losses, and investors will have to accept it.

“Spending in 2022 will have to be higher just to sustain volumes enjoyed in 2021 and I think in general Wall Street is aware of that,” said Nick O’Grady, chief executive at Northern Oil and Gas Inc (NOG.A), which owns stakes in wells in Texas and North Dakota.

New wells cost about $7 million apiece with drilling representing about 30% of the total. With oil at $70 a barrel, producers could put more money into drilling and still manage to increase shareholder payouts, analysts said.

The number of drilled but uncompleted wells, called DUCs, fell to 5,957 in July, the lowest in four years, from nearly 8,900 at its 2019 peak, based on U.S. Energy Information Administration data.

Tapping DUCs has helped to keep capital spending flat. A group of 31 oil and gas producers tracked by investment firm Cowen plan to spend just 1% more this year than last, even as oil prices have jumped.

Linda Htein, a director at energy consultancy Wood Mackenzie, said completing DUCs was a great way to sustain production without adding a bunch of rigs or increasing capital expenditure.

At current well completion rates, the EIA estimates that the top U.S. shale field responsible for U.S. oil gains in the last decade has less than six months of DUCs remaining.

The number of oil rigs recently drilling in the United States was about 401, data from Baker Hughes Co (BKR.N) showed on Friday. But that rig count is historically low compared with other periods when crude oil futures prices were near similar levels or at even lower prices. 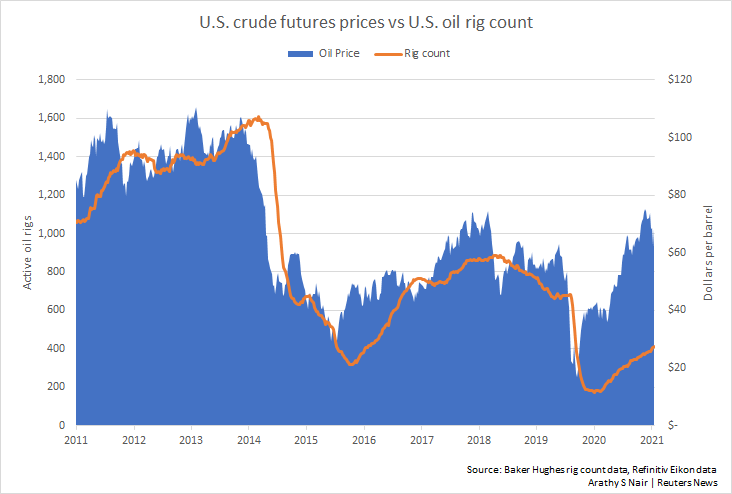 While U.S. oil rig count has risen, it was historically low compared with other periods when front-month crude oil futures prices were near similar levels or at even lower prices.

DUCs have been a “very powerful short term fix, but are not a long term solution,” said Mark Finley, a former BP Plc (BP.L) economist who is an energy researcher at Rice University’s Baker Institute for Public Policy.

“At some point the inventory of excess drilled but uncompleted wells will run out.”

Crude Oil Rallies Above $70 as Another Hurricane Menaces Texas