While much is made of the rapid deployment of renewable energy sources such as wind and solar in the last decade, have we really made a difference? One might expect that the reported huge growth has significantly changed the energy profile of the world and our potential to save ourselves from the newly coined term “Code Red “ by the IPCC. Has it?  How has our energy profile changed over the last three decades and is the “rapid” push to renewables reducing our dependence on fossil fuels? It must – it is front page news and countries like India and China are major players – as evidenced by the recent article in Hindustan Times (Aug 13, 2021):

As I like to say, the wonderful thing about numbers is that you can count on them!  So, lets look at the numbers regarding energy investment and utilization and see what the impact has been.

The Covid pandemic of 2020 had a tremendous impact on growth and investment and affected the energy markets across all sectors.  For the last 5 years, global energy investment has been about $1.9 Trillion/year, but dropped to $1.5 Trillion in 2020 ( World Energy Investment 2020, IEA ), but is expected to recover to $1.9 Trillion in 2021, with the oil and gas sector recovering by more than 14 % after a 25% decline in 2020 ( World Energy Investment 2021, IEA ). Specific excerpts from the IEA 2021 executive summary highlight some of the concerns by environmentalists and indicate that despite the huge investment in renewables, no substantial impact is being made.

The USD 750 billion that is expected to be spent on clean energy technologies and efficiency worldwide in 2021 remains far below what is required in climate driven scenarios.

In China, the policy priority is to modernise the coal sector by shutting down small, inefficient coal mines and investing instead in large, fully mechanised mines. In India, the main driver behind domestic investment is to reduce coal imports.

There was a slight increase in go-aheads for new coal-fired projects in 2020. This was largely due to China, where the government lowered restrictions on building new plants. 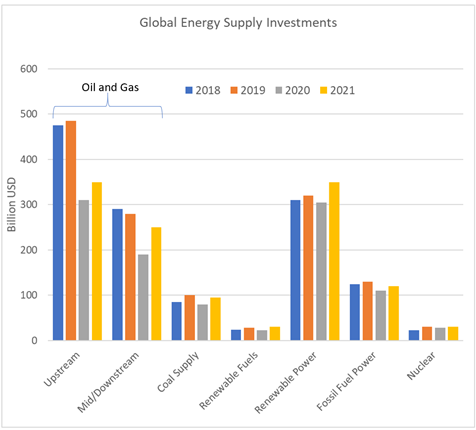 Investment is measured as the ongoing capital spending in energy supply capacity and, in the case of energy efficiency, the incremental spending on more efficient equipment and goods.

According to the UN, the world has spent about $2.6 Trillion USD on renewable energy development in the last decade. This does not include the investment in other non-fossil fuel based energy systems, such as large scale hydro and nuclear. Surely, such large investments have had a dramatic impact on the energy mix and how much of our global energy demands are being satisfied by fossil fuels. The investment varies dramatically by country, with developed nations generally investing more per capita than less developed nations. There is a wonderful interactive tool that shows investment by quarter and by country on Bloomberg. https://www.bloomberg.com/graphics/climate-change-data-green/investment.html

For the last decade, the world has been averaging between $250 to 300 billion a year of investment in renewables, of course with the intent to reduce our reliance on fossil fuels. Is it working ?

Solar and wind generation are growing quickly across the world. This is, of course, good news as we try to shift our energy systems away from fossil fuels. To many people, this means we are edging closer to a fossil-free energy system.  However, these people are intermixing the terms electricity and energy, when in fact there is dramatic difference in their magnitude and in their energy sources. While low carbon sources represent 36.7% of the world’s electricity production, renewables such as solar, wind and other  renewable sources are only 10.5% of that production, their contribution dwarfed by long-standing hydro-electric and nuclear plants that provide over 25% of the worlds electricity. When we consider total energy utilization, we must consider the energy for industrial applications, such as the cement industry (one of the largest greenhouse gas emitting industries in the world) and iron smelting, as well as for transportation, heating and electricity. In the global scheme, all of our lifetime investment in renewables has them providing only about 5% of the world’s energy ! Fossil fuels still provide almost 85% of our energy needs.

One would think that such investment, $2.6 Trillion in the last ten years, has at least reduced the relative amount of energy we get from fossil fuels. After all, it must have done some good, mustn’t it?  It seems it has, by a little bit.  Here is the raw data for the last 30 years.  The graph has been color coded to appeal to the environmentalist, with fossil fuel in shades of grey/black, hydro in blue, nuclear in red, traditional biomass in brown and the various renewables in shades of green.  Note that this is intended to be a very fair representation, in that we have used the “substitution” method where the inefficiency of some fossil fuels has been accounted for. The above graphic makes it difficult to see what is going on,  so it is useful to condense it somewhat. Below, we have looked at what percentage of the worlds total energy utilization comes from three different sources: Has it made a difference?

Of course it has! If you are of the opinion that it is important to reduce our carbon dioxide emissions, the investment in renewable technology has reduced the relative amount of energy we make by burning things by about 2.5%. If that investment were not made, our green house gas emissions would have gone up even more. The fact of the matter is though that even this large investment, 2.6 trillion dollars in ten years, has not been enough to even start to bring world emissions down. In fact, in the last ten years, CO2 emissions have increased from 31.4 billion tonnes per year to 36.5 billion, a 16% increase during the period of massive investment.

The Paris Accord, which the IPCC says is not enough, commits to reducing green house gas emissions to 30% below 2015 emission levels. Many countries, including Canada and the European Union have committed to even more drastic reductions.  Are we really to believe that in eight years a country is going to completely change its energy utilization, when many industries such as cement manufacturing, steel works, semiconductor manufacture, and fertilizer production have never been operated on an economic scale on anything other than hydrocarbons? One approach by the Western world has been to shift manufacturing and heavy industry to countries such as China and India. While this reduces emissions in the West, emissions have increased dramatically in the far east, where most of the electricity is still produced by coal. The net effect is not a worldwide reduction of emissions, but a virtue signalling effort to demonstrate compliance to a UN accord while doing nothing to really address the problem. As we have done so, emissions from countries in the far east have increased dramatically and the region now accounts for over 60% of the world’s coal utilization, a figure which is increasing every year.

Analysis of Chinese government approvals by the Centre for Research on Energy and Clean Air, a Finland-based advocacy group, found that 18 steelmaking blast furnaces and 43 coal-fired power plants were announced in the first half of this year.

No one in the energy industry will disagree that we are responsible to reduce emissions and pollution at every opportunity, and to date the emissions reductions have been dramatic. For example,  a recent study showed that many of the oil sands producers in Canada have already reduced emissions by 14 to 35% and further improvements in process operations can contribute another 15% reduction. However, with continued growth in population, increased demand for energy in developing countries, and the continued use of coal as a power source in the far east, it must be acknowledged that it will be unlikely to see large scale reduction in the world’s emissions. While investment in solar and wind presents a part of the solution, a simpler transition is from coal to natural gas. The USA has seen large reductions in CO2 emissions by converting from coal to natural gas, and such conversions must be a part of the energy transition going forward in other countries which are currently dependant on coal.

Phil Harris holds a B.Sc. in Physics, a Masters in Chemistry and has been involved in the energy industry, from nuclear to fuel cells to oil and gas, for 35 years.

Phil is also the President at Insight Analytical Solutions Inc, a Calgary, Alberta, Canada based supplier of measurement solutions to industry.

You can learn more about Insight Analytical Solutions HERE