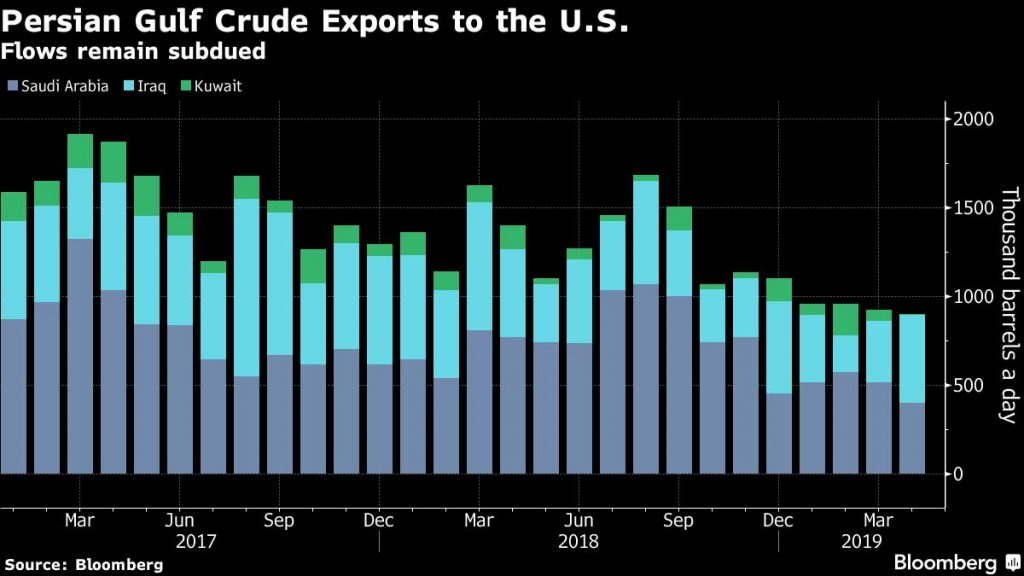 Exports of crude and condensate from the OPEC countries of the Persian Gulf, which account for about 75 percent of total OPEC output, fell for a third month in April to their lowest level since the OPEC+ group of countries began output cuts in January 2017.

The latest drop was driven by a slump in the volume of oil shipped from Iran, as waivers from U.S. sanctions on the country’s oil sales were set to expire in early May. The U.S. State Department said last month that waivers for eight countries, allowing them to continue buying oil from Iran after sanctions were reimposed in November, would not be renewed when they expired on May 2.

The looming curbs were enough to persuade Japan and South Korea to halt purchases during April, leading to a 50 percent drop in observed flow of crude and condensate from the Persian Gulf country last month.

Observed shipments from the region to China fell by more than 1 million barrels a day between February and April, with big drops in flows from both Iran and Iraq. These figures need to be treated with some caution, though, as about 28 million barrels of Persian Gulf crude was loaded in April onto tankers that were not showing a final destination. Some of that oil will almost certainly end up in China, reducing the size of the apparent drop, but not eliminating it altogether.

Shipments westward from the Persian Gulf to the U.S. remained subdued in April, again reflecting the OPEC+ output cuts. Saudi Arabia decided in the summer of 2017 that it needed to focus supply cuts on the U.S. market, where the publication of detailed weekly data means that any reduction would quickly show up in statistics that are watched by oil analysts and traders worldwide.

Booming domestic oil production has also reduced the appetite for foreign crude among U.S. refiners, contributing to the slump. Observed shipments from the Persian Gulf countries toward the U.S. in April were their lowest since Bloomberg began tracking the flow in January 2017. But, as with other flows, the volume heading to the U.S. in April may well rise, as more ships start to indicate their final destinations.

Persian Gulf crude flows to India, the closest major market, remained little changed between March and April at about 2.4 million barrels a day. Observed flows from Iran actually increased month on month, before the possible halt in shipments in May. Flows to India have fallen by almost 600,000 barrels a day since December, as the region’s exporters, led by Saudi Arabia, slashed exports in an attempt to re-balance global oil supply and demand.

Note: The figures above exclude exports from northern Iraq via Ceyhan in Turkey and include outflows from the U.A.E.’s Indian Ocean coast and from Saudi Arabian Red Sea ports. They include crude and condensates, a light form of oil extracted from gas fields. Figures for flows to individual destinations are subject to change, especially when ships pass transit points like Singapore and the Suez Canal.