How Clean Energy Jobs Could Be U.S. Political Game-Changer

Oil Plunges to Lowest Since 2021 as China Unrest Rattles Market

World Petroleum Congress 2023 to be held in Calgary

Chevron to Resume Venezuela Oil Output as US Eases Sanctions

Ukraine Wants Lower Cap on Russian Oil, at $30-$40 Per Barrel

She’s Back! Greta Thunberg Sues Her Native Sweden for Failing on Climate

Column: China and India easing away from Russian crude oil may be temporary

The Explainer: The US president’s claims of two million more barrels a day lie in domestic pressures.

We have become used to Donald Trump’s policy-by-social media in the last 18 months, but a recent tweet that claimed Saudi Arabia had agreed to an increase in oil production to the tune of two million barrels a day left his own government – and OPEC – scrambling for clarification. As always, the claim was rooted more in the desire for a positive headline than any geo-political reality. 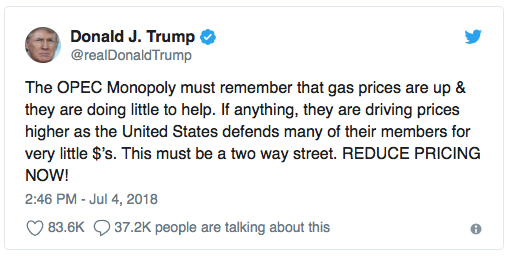 Ehsan Khoman, head of research and strategist for MENA at MUFG, steers us through the various political layers at its heart.

So it seems that, no, Saudi Arabia didn’t actually agree to this new oil production.
The White House and the Department of Energy have tried to offer clarification on the announcement. It seems the figure came from production capacity.

There are only four countries with excess capacity able to immediately replace the oil production taken off the market in 2017, and they are Saudi Arabia, the UAE, Kuwait and Russia. According to the International Energy Agency, the body that monitors energy production, Saudi’s excess capacity is 2.1 million bpd, so Trump’s tweet appears to refer to potential capacity.

According to Aramco CEO Amin Nasser, it would take at least six months to reach those levels but the critical concern is that by increasing output to near maximum levels, there would be little extra headroom to manoeuvre to counter any global geopolitical and/or unplanned supply outages. This may create a supply crunch which could be positive for oil prices in the near term.

What was Trump hoping to achieve?
The US is explicitly trying to stimulate higher production and the tweet has to be seen in the context of his desire to reduce oil prices.

He is mindful that higher prices will lead to a slowdown in the US economy and also impact the American consumer as we head into summer driving season – and beyond that its impact on the forthcoming mid-term elections in November.

The last thing he wants, with so many seats in Congress and the Senate in contention, is to have the US electorate discontent with high gasoline prices.

But we just had the OPEC meeting in June to settle production targets?
The problem with the OPEC agreement was that it was vague – deliberately so. Each of the member countries came out with differing interpretations of the supply increase:

Both Saudi Arabia and Russia declared that the total increase in output would be up to 1m b/d. Meanwhile, Iran saw no more than 500k b/d of additional output whilst Nigeria forecasted 700k b/d and Iraq said it could be as much as 800k b/d.

Ultimately, it is the opinion of countries that have the spare capacity to produce more that matters, primarily Saudi Arabia and Russia. The result thus far has been a choppy trading sessions in the last week or so, and compliance adherence will be central to the determination of the front-end of the oil price curve. 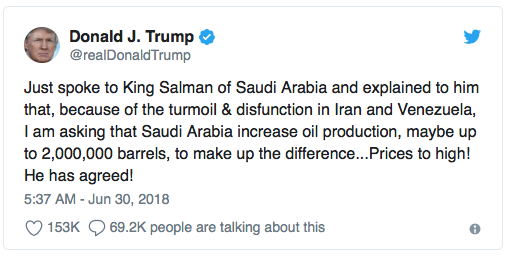 Will Trump get his way?
The alliance between Saudi Arabia and the US is likely to be one of the crucial factors driving oil supplies and prices, and markets should continue to expect coordinated market management to remain a fixture for the foreseeable future.