Doug Lawler, Chesapeake’s Chief Executive Officer, commented, “I am very pleased with our fourth quarter and full year 2017 performance, as we made significant progress toward our goals of reducing our debt, increasing cash flow generation and margin enhancement. Fiscal year 2017 was a pivotal year for Chesapeake, as we restored our production and increased net cash provided by operations, increased our oil production, adjusted for asset sales, and significantly improved our cost structure by reducing our combined production, general and administrative and gathering, processing, and transportation expenses by approximately $510 million. We further demonstrated the depth of our portfolio by closing on approximately $1.3 billion in asset and property sales and signed additional asset sales for approximately $575 million that we expect to close by the end of the 2018 second quarter. We reduced our outstanding secured term debt by approximately $1.3 billion, or 32 percent, continued to remove legal obligations and recorded the best environmental and safety performance in our company’s history.

“We are well-positioned to build on our 2017 accomplishments and progress our strategic goals, with our 2018 guidance highlighting improvements in our cost structure, increased oil production, adjusted for asset sales, and increased net cash and margins provided by operations. We expect to deliver production growth, adjusted for asset sales, of 1 percent to 5 percent on reduced capital expenditures. The expected improvements in our cost structure, as well as improved basis pricing differentials and higher NYMEX pricing, result in higher forecasted year-over-year cash flows.

“Over the last four years, we have fundamentally transformed our business, removing financial and operational complexity, significantly improving our balance sheet, and addressing numerous legacy issues that have affected past performance. Chesapeake Energy continues to get stronger, and we believe we are well positioned to create meaningful shareholder value in the years ahead.”

Chesapeake’s oil, natural gas and NGL unhedged revenue increased by 18 percent year over year due to an increase in average price despite a 14 percent reduction in production volumes sold. Average daily production for 2017 of approximately 547,800 boe increased by 3 percent compared to 2016 levels, adjusted for asset sales, and consisted of approximately 89,500 barrels (bbls) of oil, 2.406 billion cubic feet (bcf) of natural gas and 57,300 bbls of NGL.

Chesapeake’s oil, natural gas and NGL unhedged revenue in the fourth quarter increased 16 percent year over year due to a 3 percent increase in volumes and an increase in commodity prices. Average daily production for the 2017 fourth quarter of approximately 593,200 boe increased by 15 percent over 2016 fourth quarter levels and 10 percent sequentially, adjusted for asset sales, and consisted of approximately 99,900 bbls of oil, 2.603 bcf of natural gas and 59,500 bbls of NGL.

The company recently signed additional asset sales agreements for properties in the Mid-Continent, including our Mississippian Lime assets, for approximately $500 million in proceeds that we expect to close by the end of the 2018 second quarter. In addition, the company sold approximately 4.3 million shares of FTS International, Inc. (NYSE: FTSI) for approximately $74 million in net proceeds and continues to hold approximately 22.0 million shares in the publicly traded company.  FTSI is a provider of hydraulic fracturing services in North America and a company in which Chesapeake has owned a significant stake since 2006.  FTSI completed its initial public offering of common shares on February 6, 2018. The proceeds from these divestitures will go toward reducing Chesapeake’s outstanding borrowings under its revolving credit facility, to repurchase high coupon debt to reduce annual interest expense, based on market conditions.

In the Eagle Ford Shale in south Texas, Chesapeake is currently utilizing five drilling rigs and expects to place on production up to 140 wells in 2018, compared to 166 wells in 2017.

In the Haynesville Shale in Louisiana, Chesapeake is currently utilizing three drilling rigs and expects to place on production up to 25 wells in 2018, compared to 36 wells in 2017. In December 2017, Chesapeake placed the Nabors 13&12-10-13 1HC well on production from the Bossier formation, its first ever Bossier horizontal well with a lateral length of more than 10,000 feet, which achieved a peak rate of 35.8 million cubic feet of gas per day.

In the Utica Shale in northeast Ohio, Chesapeake is currently utilizing two drilling rigs and expects to place on production up to 40 wells in 2018, compared to 67 wells in 2017.

In the company’s Mid-Continent operating area in Oklahoma, Chesapeake is currently utilizing one drilling rig and expects to place on production up to 40 wells in 2018, compared to 71 wells in 2017. Chesapeake expects to spud its first horizontal well targeting the Chester formation in Woods Countyin May 2018 and its first horizontal well targeting the Hunton formation in June 2018. If successful, Chesapeake could drill up to 10 additional Chester and Hunton tests in 2018.

The table below summarizes Chesapeake’s key financial and operational results during the 2017 fourth quarter and full year as compared to results in prior periods. 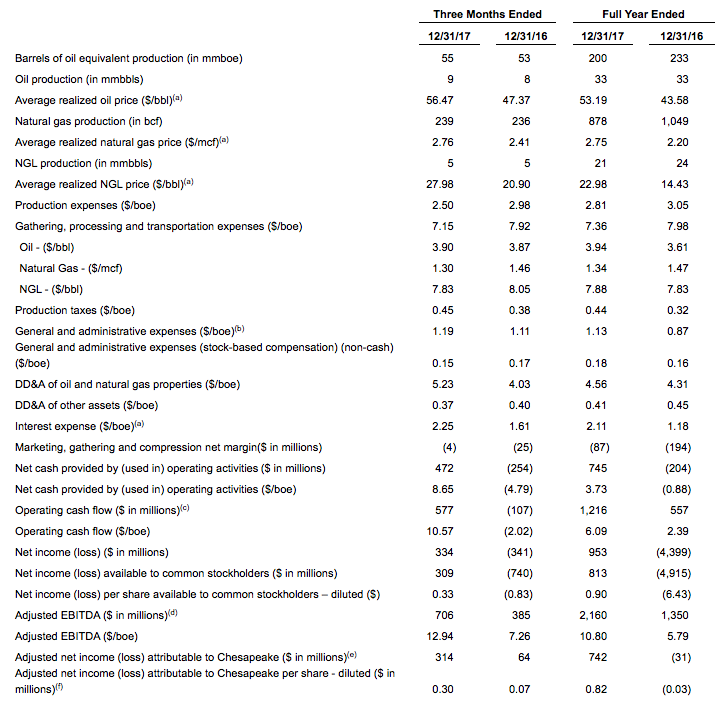 Headquartered in Oklahoma City, Chesapeake Energy Corporation’s (NYSE: CHK) operations are focused on discovering and developing its large and geographically diverse resource base of unconventional oil and natural gas assets onshore in the United States.

This news release and the accompanying Outlook include “forward-looking statements” within the meaning of Section 27A of the Securities Act of 1933 and Section 21E of the Securities Exchange Act of 1934. Forward-looking statements are statements other than statements of historical fact. They include statements that give our current expectations, management’s outlook guidance or forecasts of future events, production and well connection forecasts, estimates of operating costs, anticipated capital and operational efficiencies, planned development drilling and expected drilling cost reductions, anticipated timing of wells to be placed into production, general and administrative expenses, capital expenditures, the timing of anticipated asset sales and proceeds to be received therefrom, the expected use of proceeds of anticipated asset sales, projected cash flow and liquidity,our ability to enhance our cash flow and financial flexibility, plans and objectives for future operations, the ability of our employees, portfolio strength and operational leadership to create long-term value, and the assumptions on which such statements are based. Although we believe the expectations and forecasts reflected in the forward-looking statements are reasonable, we can give no assurance they will prove to have been correct. They can be affected by inaccurate or changed assumptions or by known or unknown risks and uncertainties.

Factors that could cause actual results to differ materially from expected results include those described under “Risk Factors” in Item 1A of our annual report on Form 10-K and any updates to those factors set forth in Chesapeake’s subsequent quarterly reports on Form 10-Q or current reports on Form 8-K (available at http://www.chk.com/investors/sec-filings). These risk factors include the volatility of oil, natural gas and NGL prices; the limitations our level of indebtedness may have on our financial flexibility; our inability to access the capital markets on favorable terms; the availability of cash flows from operations and other funds to finance reserve replacement costs or satisfy our debt obligations; downgrade in our credit rating requiring us to post more collateral under certain commercial arrangements; write-downs of our oil and natural gas asset carrying values due to low commodity prices; our ability to replace reserves and sustain production; uncertainties inherent in estimating quantities of oil, natural gas and NGL reserves and projecting future rates of production and the amount and timing of development expenditures; our ability to generate profits or achieve targeted results in drilling and well operations; leasehold terms expiring before production can be established; commodity derivative activities resulting in lower prices realized on oil, natural gas and NGL sales; the need to secure derivative liabilities and the inability of counterparties to satisfy their obligations; adverse developments or losses from pending or future litigation and regulatory proceedings, including royalty claims; charges incurred in response to market conditions and in connection with our ongoing actions to reduce financial leverage and complexity; drilling and operating risks and resulting liabilities; effects of environmental protection laws and regulation on our business; legislative and regulatory initiatives further regulating hydraulic fracturing; our need to secure adequate supplies of water for our drilling operations and to dispose of or recycle the water used; impacts of potential legislative and regulatory actions addressing climate change; federal and state tax proposals affecting our industry; potential OTC derivatives regulation limiting our ability to hedge against commodity price fluctuations; competition in the oil and gas exploration and production industry; a deterioration in general economic, business or industry conditions; negative public perceptions of our industry; limited control over properties we do not operate; pipeline and gathering system capacity constraints and transportation interruptions; terrorist activities and cyber-attacks adversely impacting our operations; an interruption in operations at our headquarters due to a catastrophic event; certain anti-takeover provisions that affect shareholder rights; and our inability to increase or maintain our liquidity through debt repurchases, capital exchanges, asset sales, joint ventures, farmouts or other means.

In addition, disclosures concerning the estimated contribution of derivative contracts to our future results of operations are based upon market information as of a specific date. These market prices are subject to significant volatility. Our production forecasts are also dependent upon many assumptions, including estimates of production decline rates from existing wells and the outcome of future drilling activity.  Expected asset sales may not be completed in the time frame anticipated or at all. We caution you not to place undue reliance on our forward-looking statements, which speak only as of the date of this news release, and we undertake no obligation to update any of the information provided in this release or the accompanying Outlook, except as required by applicable law. In addition, this news release contains time-sensitive information that reflects management’s best judgment only as of the date of this news release.

Why the Next Oil Boom Will be Fueled by Blockchain