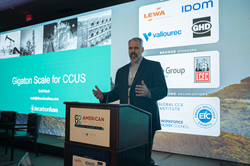 The United States and Canada are in a leadership position with carbon capture, utilization, and storage projects. The industry is developing rapidly due net zero goals and 45Q tax incentives, but companies face challenges with project staffing, equipment constraints, and regulatory permitting. Carbon capture and sequestration must reach gigaton scale in order to achieve net zero goals.

Todd Bush, the chairman of the event, opened the conference by stating, “In order to reach our net zero goals, we must get to gigaton scale for carbon capture. That is one billion metric tons of carbon sequestered per year. The United States and Canada have had the most success with carbon capture and storage with more demonstrations, more pilots, and more operational facilities to draw on lessons learned.”

According to Decarbonfuse data, there are 75 projects in North America under development including direct air capture, carbon sequestration, and blue hydrogen projects. Many of these projects expect to be operational in 2024 to 2026 presenting potential supply chain constraints for the industry.

Key points during the American Carbon Capture Forum were regulatory permitting, supply chain, and staffing challenges that face the industry.

“ALJ Group is aware that it won’t be possible to get to net zero without advancing carbon capture, utilization and storage technologies and Texas has the potential to become a very important hub for that,” said Larry Keras, CEO of ALJ Group, organizers of the American Carbon Capture Forum.

Organizes high-level events of different formats (business meetings, forums, conferences, exhibitions) for Energy and Maritime experts and industry leaders. Our values are based on knowledge, innovation and communication and our events embed these three essential parts that lead to progress. Two closely related LNG and Maritime sectors constantly undergo challenges and changes and only through a dialogue and partnerships can the industries thrive and become even more sustainable and progressive. Our company is devoted to encouraging the sharing of knowledge and good practice between experts from different areas: researchers, government representatives and business leaders. Read more at https://www.uscarboncaptureforum.com/

Decarbonfuse is the community for the people solving industrial decarbonization through hydrogen, carbon capture, carbon removal, and electrification. Follow the money flow of climate, technology, and energy investments to uncover new opportunities and jobs. Our mission is to bring together decarbonization data and news across industries so that our audience can make informed and sustainable decisions. Read more at https://decarbonfuse.com

World Petroleum Congress 2023 to be held in Calgary