Big Oil Is Paying Out Years of Dividends in One Day

U.S. Oil Rig Count Falls by the Most Since September – Baker Hughes

Hydrogen is the most abundant element in the universe, making up almost 75% of all matter.  As a zero-emissions energy carrier, it stands to reason that as the world works to decarbonize our energy systems, the ability to tap into this vast resource would go a long way to satisfying our overall energy needs with this greener (and maybe bluer) resource.  Globally, governments, including Canada’s federal and various provincial governments have concluded that hydrogen will form part of our energy mix, not least of all because of its potential as a much lower-carbon fuel than traditional hydrocarbons. As of 2021, there were over 30 countries worldwide who had developed and adopted their own hydrogen strategies.

In November 2021, the Alberta Government released a roadmap to building a hydrogen economy and in April this year, it announced a $50 million contribution to establish a Hydrogen Centre of Excellence within Alberta Innovates.  The funds will be used to “drive innovation in the production and use of hydrogen in Alberta.”  While Alberta already produces 2.4 million tons of hydrogen per year, clearly policy makers see expanded potential in an industry that some expect to grow to between $2.5 and $11 TRILLION globally by 2050.  Alberta’s Hydrogen Roadmap suggests that the global sale of hydrogen could exceed $700 billion by 2050.  Alberta’s Associate Minister of Natural Gas and Electricity recently noted that he is aware of at least $14 billion of hydrogen investments that have been announced just in the past year.

GLJ has, for many years, been keenly aware of the ever-growing potential for hydrogen as a low carbon fuel and has watched as small, even tentative projects have taken hold and slowly built a foundation up which much of the current global enthusiasm for hydrogen has been built.  GLJ works to unlock hydrogen’s potential as a flexible clean energy carrier for decarbonizing multiple heavy emitting and difficult-to-abate sectors. Our multidisciplinary hydrogen team includes engineering, geoscience and business strategy expertise. We have formed strategic partnerships with firms specializing in facilities and process design, allowing us to provide access to an integrated project team capable of solving challenges across the entire hydrogen value chain.

GLJ has developed an early track record of delivering solutions for our clients exploring hydrogen’s potential for decarbonizing their operations. Our hydrogen research has been recognized by industry associations such as the SPE, CHOA, CSUR and the Alberta Chamber of Resources.  This track record of success helps our clients capitalize on the natural advantages that Canada has with regards to its hydrogen production capacity:

According to Canada’s federal hydrogen strategy, Canada’s unique advantages have allowed the development of projects right across the country. 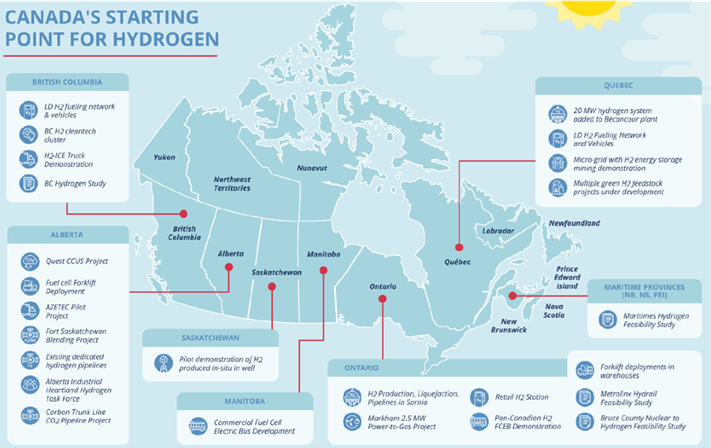 This starting point will contribute significantly to Canada’s move towards decarbonizing our domestic economy and position it as a top 3 global exporter of hydrogen. 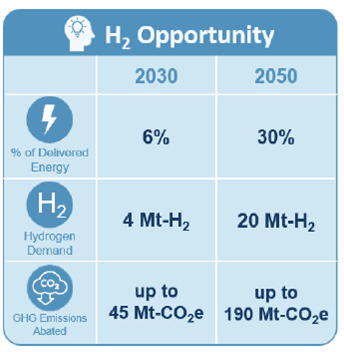 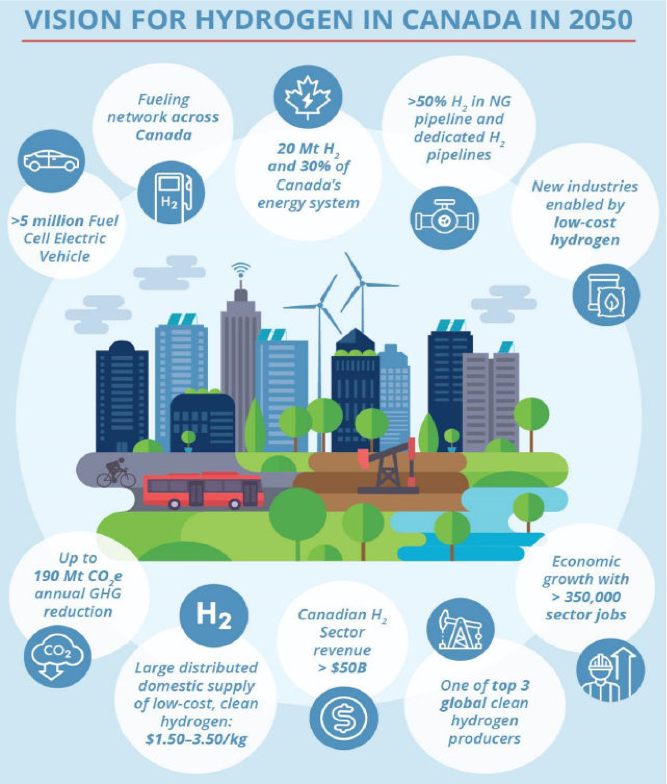 As the world shifts towards decarbonization and alternative fuels, traditional oil and gas sector players with long histories based on traditional hydrocarbon production are also expanding their portfolios to place at least some focus on a broader definition energy.  Their participation at two recent Canadian hydrogen events signals their interest and, in some cases, their commitment to advance hydrogen as part of the global energy mix.

The Canadian Hydrogen Convention and the Canadian Hydrogen and Fuel Cell Association’s f-cell Canada conference were both recently held in Edmonton.  GLJ’s team at these events had many discussions with participants and noted just how quickly the issues are evolving and how companies beyond the energy sector have roles that they will need to play in determining how the evolution of hydrogen-related issues will impact their operations, planning and financial decision-making for the foreseeable future.  Hydrogen is not only applicable for reducing the carbon emissions from the oil and gas industry, it has great potential as a unique abatement tool for several high emitting transportation and industrial processes that are difficult or impossible to electrify.

As a developing component of the energy sector, hydrogen (and related considerations such as CCUS) will continue to pose both opportunities and challenges for the industry as its players look to define their strategic and operational plans going forward. GLJ’s 50-year energy consulting experience and constant forward-thinking approach means that our clients can rely on our support which includes more than 30 years of CCUS experience and a dedicated hydrogen team to provide the solid foundation on which they can base those business-critical plans and decisions.

Get in touch with us to find out we can help your company take advantage of the exponential growth in the hydrogen sector in Canada and globally.

Inactive Investment: Opportunities for Methane Reduction at Inactive Well Sites
WATCH: 40 Years of Continuous Practical and Efficient Retrofit Solutions for Your Flare System Needs
WATCH: A Level Above the Rest – Insight Analytical
Platforms Are the Future: The Rise of the Platform Solution – Geoffrey Cann