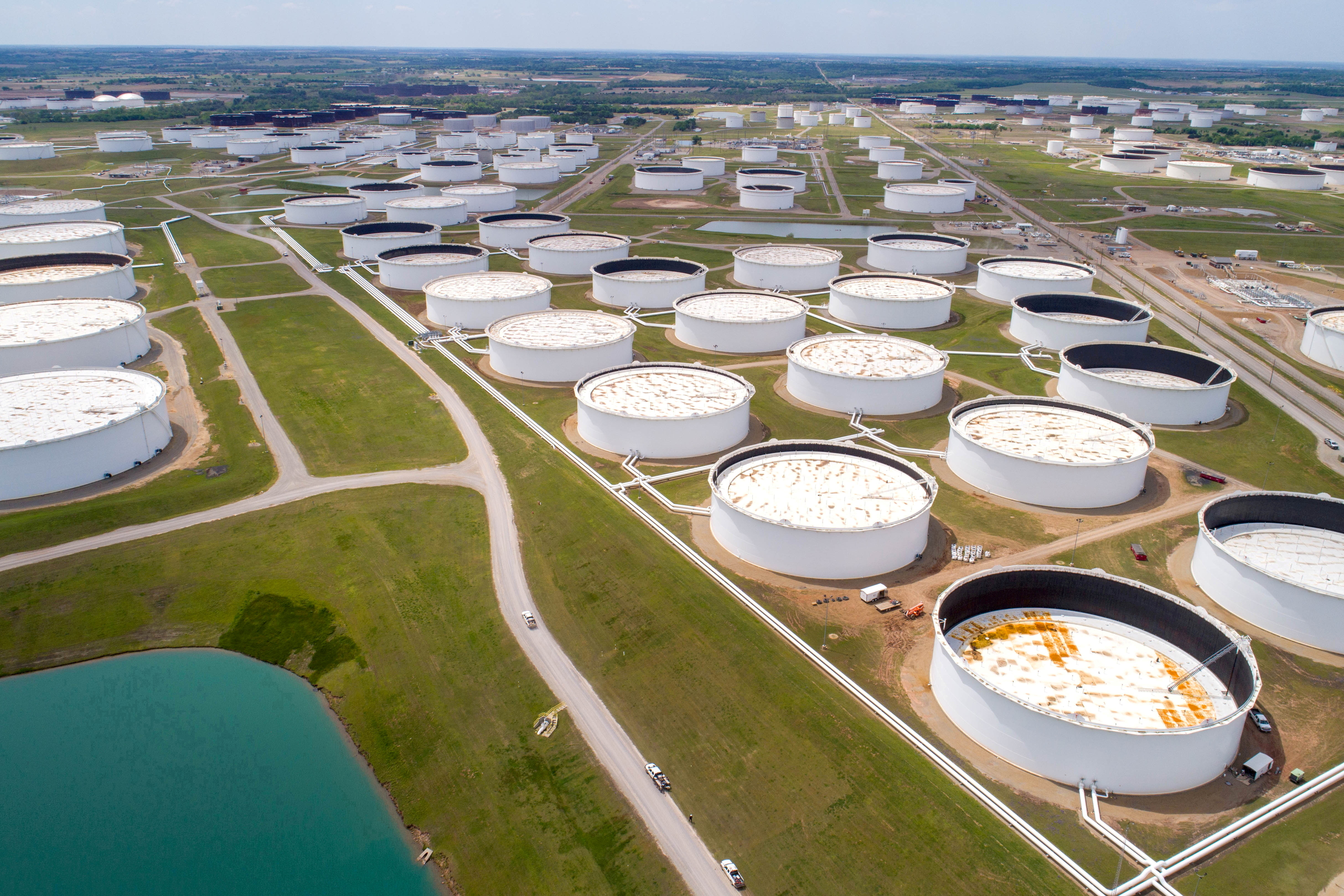 Crude oil storage tanks are seen in an aerial photograph at the Cushing oil hub in Cushing, Oklahoma, U.S. April 21, 2020. REUTERS/Drone Base

LONDON, Oct 21 (Reuters) – For all the angst caused by this year’s 65% oil price leap, concerns about a return to 1970s-style stagflation are overblown and the developed world, at least, can probably handle even costlier crude without too much stress.

Alternative energy sources, a rise in less energy-intense service sectors, plus more efficient vehicles, gadgets and power plants mean that oil demand has evolved, not just from the 1970s but even since 2008 when oil futures neared $150.

Below are a series of graphics detailing the role of oil and the impact of its current price surge:

Oil intensity — the volume of oil consumed per unit of gross domestic product — dropped 56% between 1973 and 2019, according to Columbia University’s Center for Global Energy Policy.

So if in 1973 it took a little under one barrel of oil to produce $1,000 of economic output, that figure has fallen to less than half a barrel.

One likely cause is intermediate users such as power plants switching away from oil.

End-users such as motorists remain reliant on petrol but thanks to tech advances, the average U.S. car gets 25 miles per gallon versus 13 miles in 1975.

Yes really. Despite the 430% jump in Brent crude since March 2020, oil looks inexpensive on a longer-term view.

Since early 2011, global equities have surged 125% (.MIWD00000PUS), major cities have witnessed double or triple-digit house price growth but Brent futures are down 10%.

Oil averaged more than $100 a barrel between 2010 and 2015 and the global economy and markets held up fine, note JPMorgan strategists Marko Kolanovic and Bram Kaplan.

“We do not believe that the current price of energy will have a significant negative impact on the economy,” they wrote.

“Adjusting for inflation, consumer balance sheets, total oil expenditures, wages and prices of other assets, we think even with oil at $130 or $150, equity markets and the economy could function well.”

As of Oct 8. when their note was sent, energy’s share was 5.6%, they wrote. So overall energy costs would need to rise another 60% to hit the threshold.

Oil’s share of the global energy mix has shrunk to 29% from around 50% in the 1970s, as use of natural gas and renewable sources has grown.

Energy demand may also be decoupling from economic growth, says consultancy McKinsey, which cites the renewables expansion, increased electrification and the growth of services in countries such as China, once reliant on industry.

One threat is that alongside oil, prices of other energy sources also rocket — gas and coal prices have hit record levels.

“There is nowhere to hide,” said Thomas Costerg, senior economist at Pictet Wealth Management. “Oil at $80 is more painful than it would normally be because gas and coal are also at record highs.”

The impact of costlier power could hit harder if it forces consumers to cut back on Christmas spending, he added.

BofA’s analysts reckon the global “consumption tax” from the energy price shock could be as large as 1.6% this year.

And what if predictions of ‘peak oil demand’ come up short?

Morgan Stanley’s analysts, who this week predicted Brent would hit $95 in the first 2022 quarter, argue that as investment in new production falls, ‘peak oil supply’ may actually arrive before peak demand.

The outlook for emerging markets is more troubling.

Big oil importers including the Philippines, Thailand, India and Turkey face a double whammy — weakness in their currencies against the dollar exacerbates the shock.

A barrel of Brent costs 785 lira for Turkish buyers. for example, versus 370 lira in early-2021. Prices have nearly doubled in Indian rupees and Thai baht.

U.S. natgas slips ahead of storage report on forecasts for less demand