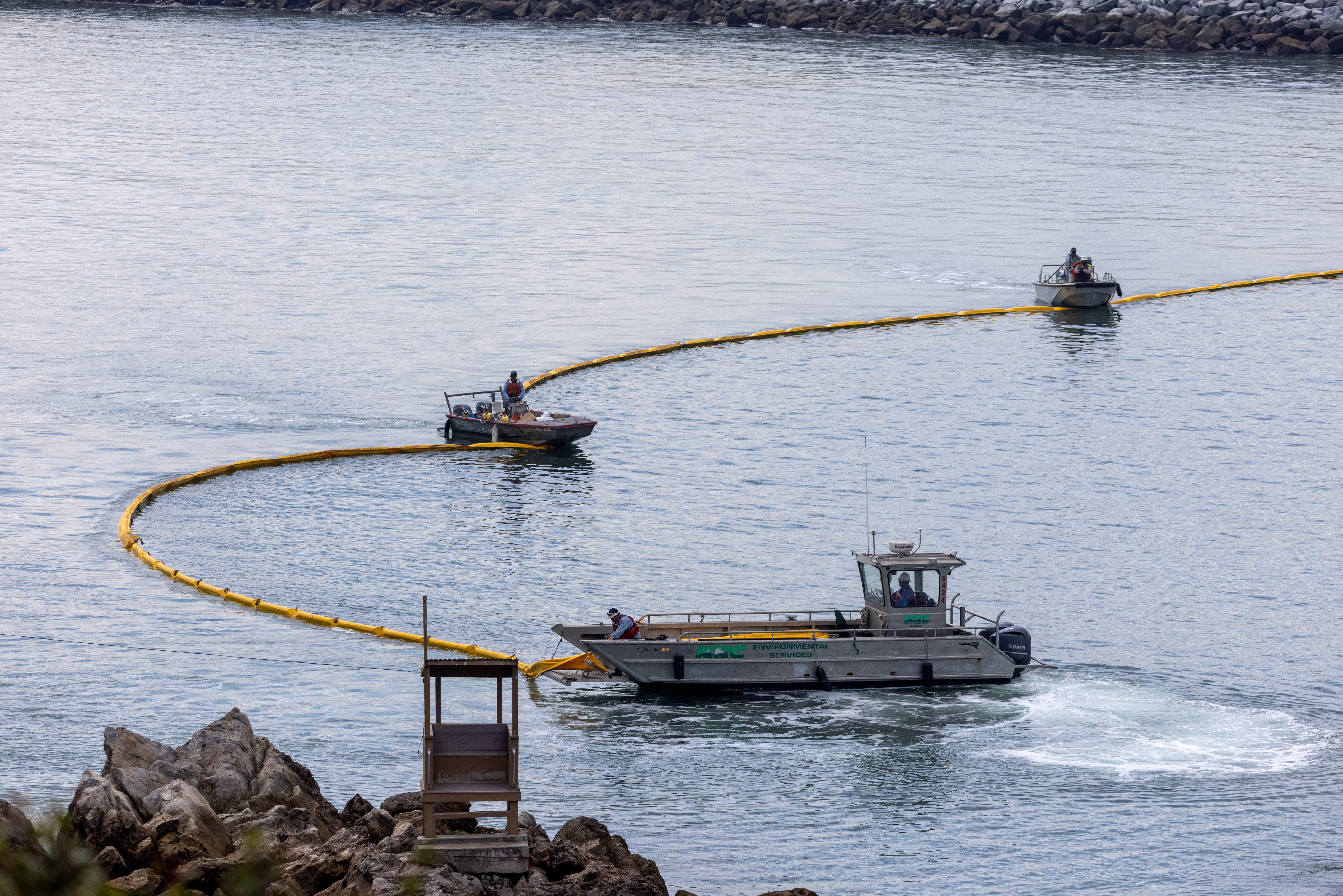 Workers seal off the entrance to Newport Beach harbor as a major oil spill off the coast of California travels south in ocean currents, towards Newport Beach, California, U.S., October 4, 2021. REUTERS/Mike Blake

NEW YORK, Oct 5 (Reuters) – Oil spills into ocean waters, subject to winds and tides and spreading swiftly over wide areas, are difficult to clean up.

The 3,000-barrel weekend spill off the coast of southern California is nowhere near as disastrous as mega-spills like the 2010 Deepwater Horizon explosion that sent millions of barrels of oil into U.S. waters of the Gulf of Mexico. But swift movement of the liquids can kill wildlife and foul beaches before cleanup teams are deployed.

U.S. federal and state responders begin fighting oil spills by deploying diving teams, and they use tools like containment booms: floating barriers that help contain the spread of spills far offshore, keeping much of the oil from reaching the coastline. Still, this weekend’s spill had spread over a number of miles in the Pacific Ocean.

“As the oil continues to move, the (cleanup) area expands, and it’s going to be a sustained effort,” said U.S. Coast Guard Public Affairs Officer Jeannine Shaye, at a Monday press conference. “We have 14 vessels on the water hired by oil spill response organizations.”

According to a spill response plan that pipeline owner Amplify Energy had filed with the Bureau of Ocean Energy Management, the company kept certain spill response gear on its nearby platform, called Elly. The equipment aboard Elly was to include “15 bales sorbent pad, six bales sorbent boom (four per bale), one sorbent roll (36”) and eight tracking buoys,” according to the plan.

Containment booms generally trap as much crude as possible using a skirt that hangs down into the water, weighed down by a chain or cable.

Booms also use a “freeboard,” a firm piece above the waterline to keep oil from splashing outside the containment area. However, booms can be less effective if storms or high waves crest the top of the equipment.

Residents of Orange County, California, said they saw tar-like balls wash up on the beach. In some cases, dispersant chemicals are used to break up clumps of oil, particularly when a spill is farther offshore and difficult to contain, as was seen in the Deepwater Horizon spill in 2010.

Since the Deepwater Horizon oil spill, the U.S. National Oceanic and Atmospheric Administration has developed two new repositories of data to better detect oil spills and other pollution events, as well as where spills are moving.

For recovering from a large, contained oil slick, responders can use a specialized ship that pulls alongside the containment area, trapping crude and then pumping it into tanks aboard.

Recovery crews can also rely upon remote-operated skimmers, which scoop the oil from above, then contain it. Skimmers operate best in calm waters, and can also remove more water than oil, according to the Environmental Protection Agency.

Sorbents, a type of pad that can absorb crude oil, are often deployed when thicker grades of crude need to be absorbed. Sorbents are less effective at collecting lighter types of crude oil.

The oil involved in this spill was generally heavier oil, with thick-tar like components that could be more easily trapped with sorbent pads.