After more than a year of depressed fuel demand, gasoline and distillate consumption is back in line with five-year averages in the United States, the world’s largest fuel consumer. That has boosted margins on refined products to more than double what those companies were making at this time a year ago.

The seven largest independent U.S. refining companies, including giants Marathon Petroleum (MPC.N) and Valero Energy (VLO.N), are projected to post an average earnings-per-share gain of 66 cents, versus a loss of $1.32 for the third quarter of 2020, according to IBES data from Refinitiv. (GRAPHIC: https://graphics.reuters.com/USA-REFINERIES/EARNINGS-OUTLOOK/mopanjqyzva/)

Those gains are driven by the 3-2-1 crack spread, a proxy for refining margins, which assumes a barrel of crude oil is refined to three parts gasoline, two parts diesel and one part jet fuel. That spread is currently at $21 per barrel, compared with around $9 a year ago.

Energy demand has recovered swiftly from the worst days of the pandemic in 2020, and Brent and U.S. crude oil prices have reached multi-year highs in recent days. But product demand has also increased, and that has helped boost margins.

Product supplied – a proxy for U.S. refined product demand – was 21.5 million barrels per day in the most recent week, slightly higher than the same period in 2019, prior to the onset of the pandemic, according to the U.S. Energy Information Administration (EIA).

“The market is getting back in equilibrium,” Credit Suisse analyst Manav Gupta said in a note.

Refiners are also benefiting from lower inventories of their products as recent storms and the pandemic knocked refining capacity offline. Approximately 2.5 million barrels per day of refining capacity has been shut since the start of the pandemic, which is almost four times the 10-year average, according to Credit Suisse’s Gupta.

Jet fuel demand is still below pre-pandemic levels, but international flights are expected to resume to Europe in November. The spot price of U.S. Gulf Coast kerosene-type jet fuel is $2.10 dollars per gallon, the highest since October 2018, despite demand still 12% below 2018 levels, per EIA data.

Analysts have also been raising estimates for refiners such as PBF Energy and Hollyfrontier due to declining costs of complying with the nation’s biofuels laws. Refiners are required to blend ethanol into the nation’s gasoline pool or buy credits for others who can.

The cost of those credits declined sharply in the third quarter. Reuters reported in September that the U.S. Environmental Protection Agency is expected to recommend reducing federal biofuel blending mandates for 2021 to below 2020 levels, according to analysts. 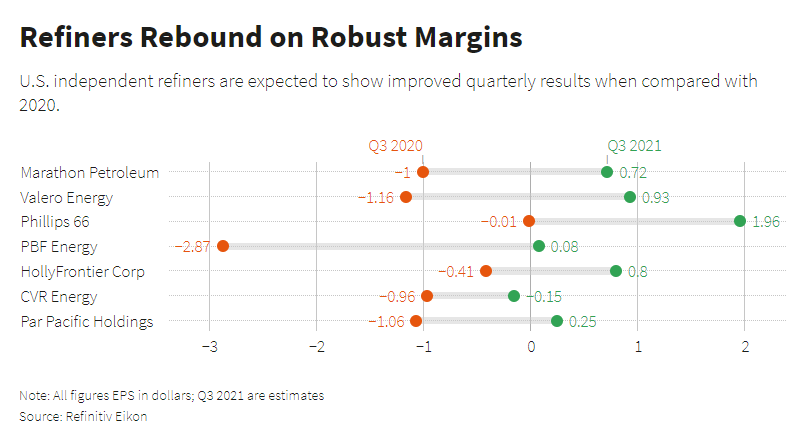