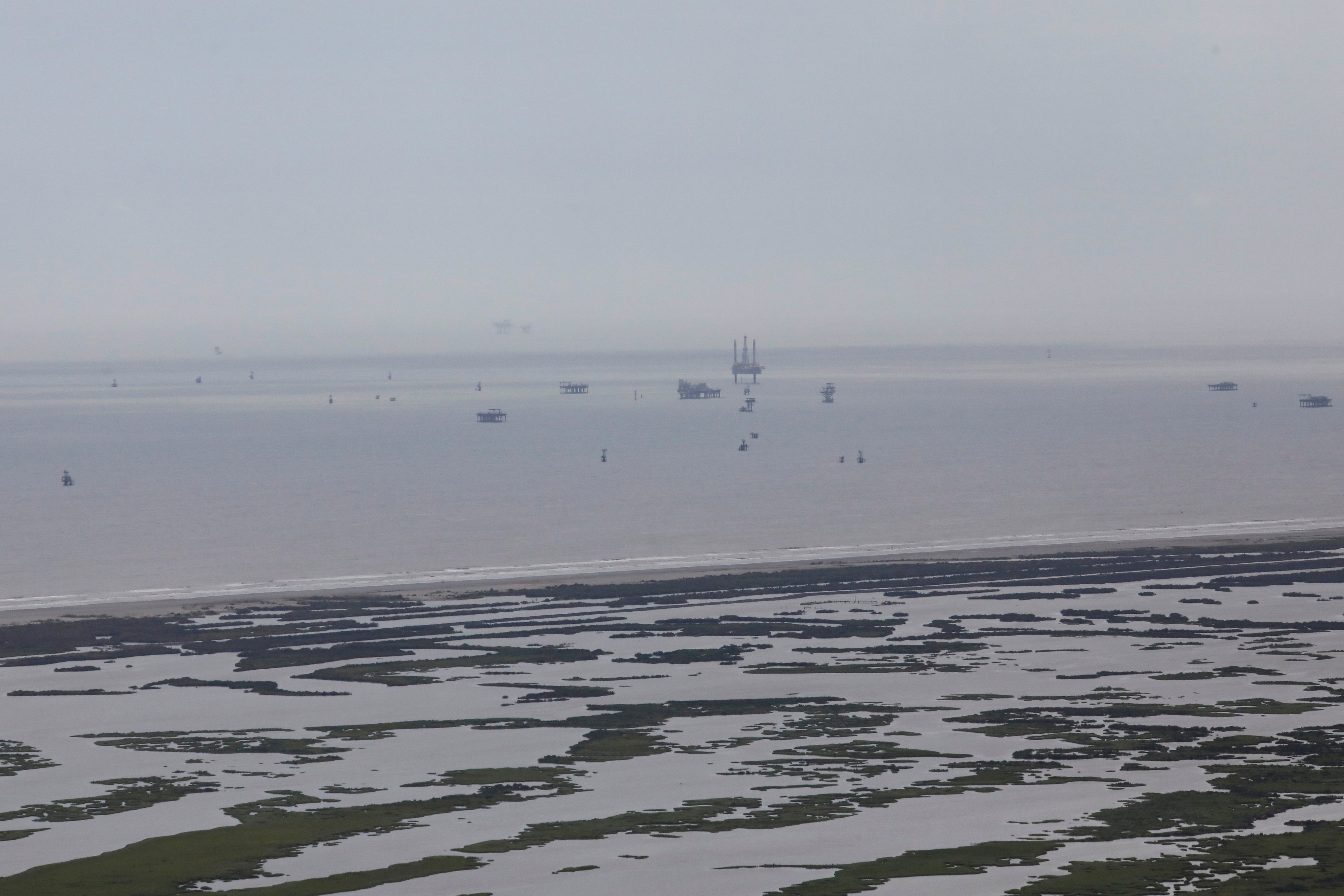 Oil rigs are seen in the Gulf of Mexico after Hurricane Ida made landfall in Louisiana, in Grand Isle, Louisiana, U.S. August 31, 2021. REUTERS/Marco Bello/File Photo/File Photo

Hurricanes Ida and Nicholas damaged platforms, pipelines and processing hubs, shutting in most offshore production for weeks. Restarts continued on Thursday with about 28% of U.S. Gulf of Mexico crude output offline. Some vessels remained at sea waiting to load U.S. crude.

But of more than 50 tankers set to load U.S. crude for exports or to discharge imported oil in Texas and Louisiana through early October, the majority remained on track on Thursday, according to Refinitiv Eikon vessel tracking data. Just 22% were showing delays.

Some exporters of Mars crude, which is produced in the Gulf, have offered customers alternatives including switching to other crude grades, re-scheduling loadings or changing ports, traders involved in the sales said.

That strategy resulted in Mars prices easing in recent days. After spiking to a $1.50 per barrel premium above the U.S. WTI, the highest since January, Mars for October delivery slid to a 50-cents per barrel discount to the U.S. benchmark on Wednesday, the lowest in two weeks.

However, some analysts said Mars would be the last grade to come back to the export market because of damage to a key offshore transfer hub. Royal Dutch Shell (RDSa.L), which declared force majeure on contracts, continues to assess damage to the West Delta-143 platform, which controls the flow of oil from three large fields.

Chevron Corp. on Thursday said it was preparing to resume production at its Petronius platform. [nFWN2QI0N9]

Some tankers that were scheduled to load at Louisiana ports in the last three weeks have diverted to Galveston Offshore Lightering Area (GOLA) and Corpus Christi, Texas, for loadings. Those ports are fully working after brief suspensions due to Hurricane Nicholas this week. read more

Corpus Christi exported 1.69 million bpd of crude in August, up about 100,000 bpd from July, the port said. Export data for September was not available.

In contrast, the largest privately-owned U.S. export terminal, the Louisiana Offshore oil Port (LOOP), has yet to receive its first vessel since Ida, Refinitiv data showed. Its storage caverns were only 26% utilized in August, the company said.

Weekly U.S. crude exports in September have slipped to between 2.34 million bpd and 2.62 million bpd, according to preliminary data from the U.S. Energy Information Administration, from 3 million bpd in late August.

With about 500,000 barrels bpd of refining capacity offline since Ida, most Gulf Coast refineries have been able to meet demand with crude loans from the U.S. Strategic Petroleum Reserve and arriving supplies.

The Aframax tanker Crude Centurion, carrying 500,000 barrels of Mexican Maya crude, on Thursday was docked and discharging at a Phillips 66 (PSX.N) refinery in Belle Chasse, Louisiana, according to Refinitiv data.

U.S. regulators are still reviewing offshore platforms and approving resumption of production. Of the 288 platforms evacuated during Ida, 42 remained unoccupied on Thursday, the Bureau of Safety and Environmental Enforcement (BSEE) said.

“Facilities sustaining damage may take longer to bring back online,” BSEE said in a written statement to Reuters.