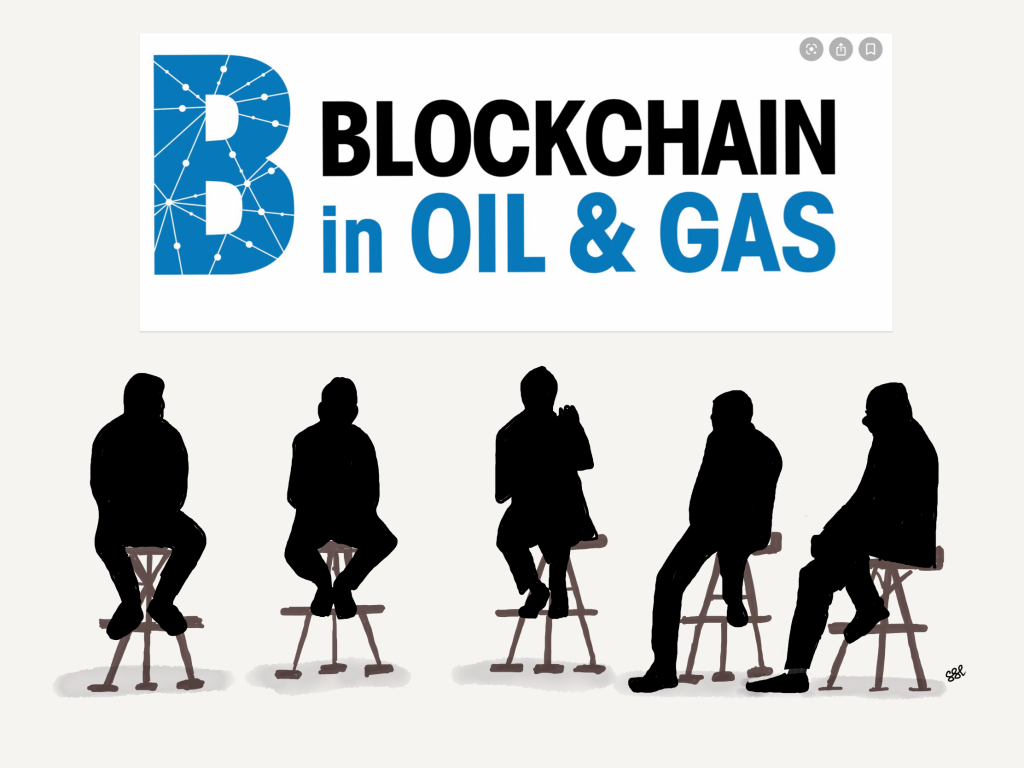 In case you think blockchain technology is losing its appeal to oil and gas, think again. A recent conference highlights how this sleeper technology is powering ahead.

The Only Blockchain Oil and Gas Conference

The Energy Conference Network hosts the only oil and gas gathering dedicated to the power and potential of blockchain technology to transform the sector. On September 13 and 14, a hundred or so professionals gathered in person and on line to sort through the latest developments. I was very pleased to attend as chair of a panel, and thought I’d share my notes from the event.

Distributed ledger technology (DLT), also called blockchain, is a database design first described in 2008 as a way to maintain records between parties who don’t trust each other, but without a central agent to provide that trust. A blockchain database has transactions (records) that are recorded sequentially by time stamp. The blockchain database is copied to many different computers, which use complex encryption and mathematics to update the database (by consensus) and ensure that the transactions cannot be tampered.

Bitcoin is the high visibility blockchain use case that has captured the imagination of many investors, but blockchain has so many other uses that can create value in oil and gas by lowering costs, eliminating disputes, and detecting fraud.

Observation #1: The Structural Pressures Are Increasing

It’s not lost on anyone in oil and gas that the industry is under very strong pressures for change. The list of factors and considerations is as long as it has been in my career:

Decarbonization — the need to dramatically reduce the carbon footprint in operations, at the same time that fossil fuel customers are abandoning the product (Shell court case)

Customer preferences — the now-permanent swing from in-person everything to mostly on-line (shopping, entertainment, media), which translates into permanent demand destruction.

These are the factors most impacted by digital, but there are many others: the state of geopolitics about energy, the on-going tilting of demand away from Western to Eastern consumers, the looming abandonment obligations, and, capital market access for industry incumbents.

In short, it’s a trying time.

At the same time that our industry is under such intense pressure, a new technology era is now swiftly upon us. It includes many of the innovations that oil and gas is itself prosecuting along side many other sectors. What is fascinating is that almost all of these innovations are converging with blockchain technology to provide their underpinnings.

Machine learning — the combination of unlimited computing horsepower in the cloud and the availability of massive data warehouses and data lakes in the cloud lets machine learning blossom. This unlocks a need to deepen trust of data, algorithms, and the resulting calculations.

Animating the physical world — the rapid deployment of inexpensive sensors transforms the dumb metal world into active and animated participants in the economy. We now need mechanisms to assure that machines are indeed real, not false actors, and authorised.

Autonomous vehicles — the technology that reinvents transportation, supply chains, insurance, and the many dependents. We will require proof that an autonomous vehicle acted in accordance with its programming.

Distributed energy — the overhaul of energy systems away from the Thomas Edison model and towards the internet design. Traditional consumers of energy are becoming providers of same, and we need better and cheaper means to settle the energy transaction relationship.

Technology in and on our bodies — nano and other technologies that let us reinvent health and medicine, lifestyles, disabilities, and cognitive performance. Tracing technologies (for food stuffs and medicines) from source to consumption is key to managing recalls, product failures, expiries, and warranties.

Virtual reality — the creation of alternative realities (virtual, mixed and pure digital) within which humans and the physical world can interact. Deep fakes that fool humans into acting to the wishes of criminals call out for certificates of authenticity.

Drones and robotics — the arrival of autonomous devices that carry out work on an independent basis (in the air, on the ground, underground and under water, and in space). The agency question from animated equipment surfaces again.

Other innovations, both digital and not, could expand the conversation further, including digital twin technology, the industrial internet of things, nano technologies, Industry 4.0 and 5.0, the race to space, and many others.

A scan across the broader global oil and gas landscape highlights how industry participants have either considered or are actively exploring blockchain use cases. Here’s a partial list of example areas discussed at the conference:

Hoarding behavior and price gouging expands during environmental distresses such as hurricane events, but also in the pandemic. Increase transparency in supply chains to discover surge inventories, build ups, and hoarding.

There is no better illustration of ledger technology than enterprise resource planning systems (ERP). The major players are actively considering how to reimagine and rebuild what amounts to trillions of dollars in installed software using blockchain.

An entirely new need for humanity is to track carbon so that it can be effectively priced, traded, and eliminated. Today’s mechanisms for doing so are opaque, open to fraud, riven with fake credits, plagued with false measurement, double spent, over counted and generally ineffective. Buyers of carbon offsets face pricing and exposure risks. Representing carbon (produced or not) using tokens can transform carbon management.

Contract management is due for reinvention. The notion of humans taking responsibility to supervise contract execution manually fails in a more automated world. New smart contracts that contain self executing code, are about to penetrate many contracting relationships.

Developed economies take real property rights as a given, but in developing nations, 70% of land titles are not enforceable. In some countries, it is even higher. Tyrants, dictators and privileged elite merely over write land titles to seize prime resources from the disadvantaged.

An early area of transformation for oil and gas is in trade. Finished product trading in Europe and more recently raw crude trading in North America have already benefited from cleaner and simpler processes.

Finance and energy are the most regulated industries. Ledger technology and smart contracts can automate much oil and gas taxation activity, and simplify compliance reporting. A more digital economy may be easier to tax with fewer side effects, and create a fairer tax system.

It is now time to embrace cryptocurrency. Not only are corporate giants like Facebook setting out to pioneer their own stores of value, but central banks are now aggressively sorting out how to best create digital currencies.

New business models enabled by blockchain allow investors to own fractions of production assets, for production sharing or carbon management. Attractive assets for this model are those that are unable to attract traditional capital.

As a small business owner, I am personally highly frustrated at the inability of my bank to transfer money from my USD bank account at the bank to the USD credit card issued by the same bank. This transaction takes a phone call every month. Decentralized finance mechanism are going to transform all these micro insults from the banking sector.

Related to DeFi is the ability of one machine (an air conditioner on a building) to purchase and pay for a service (such as energy) provided by another machine (an energy supplier). The potential for machines to transact directly lowers cost but machine owners need a trust mechanism to see that the transactions are authorized.

The conference also included briefings from outside of oil and gas, in such areas as the automotive industry (the MOBI initiative to address vehicle battery recycling rules in Europe) the food industry (the GS1 initiative for food tracing) and the freight industry (DexFreight).

The collaborative Blockchain for Energy consortium is actively sponsoring a number of key pilots that are helping to advance the industry. Those receiving a bit of attention included:

AN OVERHAUL OF JOINT VENTURE BALLOTING

THE DIGITAL MANAGEMENT OF SEISMIC ASSETS

Millions of transactions for commodity transportation and handling are machine-enabled, captured on smart contracts and settled.

A fundamental rethink of ESG reporting and compliance that creates secure reliable record of carbon emissions and offsets that link back to the source.

Blockchain in oil and gas is a bit like Tesla in the auto industry—not getting the attention it deserves, and soon it will be all too late.

Turnkey Construction: the Latest Way to Simplify your Mining Operations