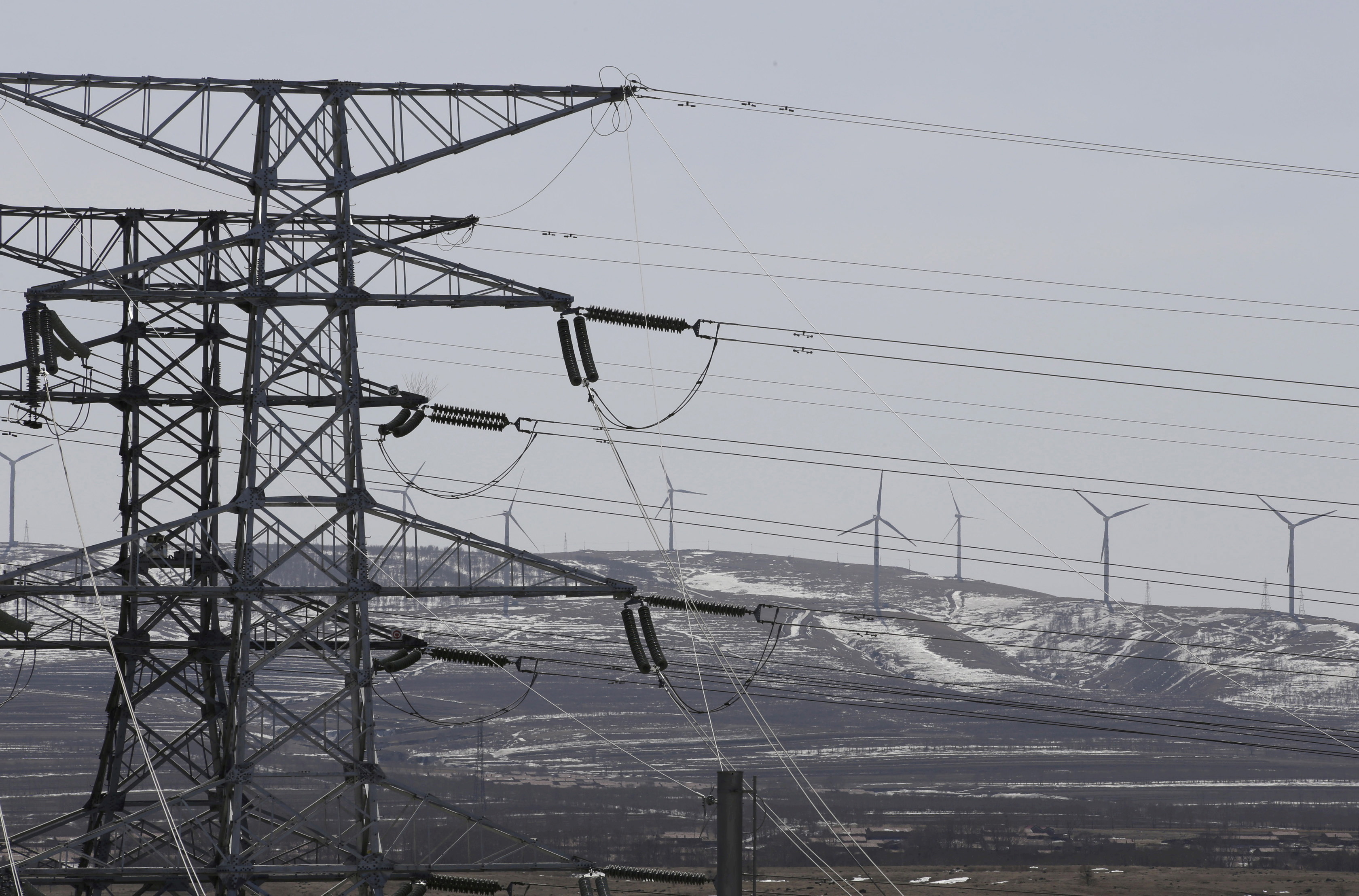 Power lines and wind turbines are pictured at a wind and solar energy storage and transmission power station of State Grid Corporation of China, in Zhangjiakou of Hebei province, China, March 18, 2016. REUTERS/Jason Lee

One of the most pressing challenges for China to meet its pledge to cap carbon emissions this decade and pivot toward renewables is overhauling its electricity grid, the world’s largest, officials and analysts say.

Beijing’s surprise announcement last year that it would hit peak emissions by 2030 and become carbon neutral by 2060 could presage the biggest reduction in projected global warming of any climate commitment to date, researchers say.

But building new solar plants and wind farms is the easy part, analysts say. Upgrading the system that transmits that green power to faraway consumers could be five times more costly, and depends on rapid technological progress.

“When we talk about the challenges, most people focus on the (electricity) grid,” said Chunping Xie, an expert on China’s policies on climate change and energy at the London School of Economics and Political Science. “It’s the first step in this long journey.”

Investments in China’s grid and other associated costs are expected to exceed 6 trillion yuan ($896 billion) over the next five years, Mao Weiming, former chairman of State Grid, said in a speech in October.

This mainly involves pivoting to solar and wind energy and away from coal, of which China is the biggest global consumer. Beijing plans to more than double its solar and wind power capacity to 1,200 gigawatts (GW) by 2030, from 535 GW now.

Such a drastic swing from coal, which generates a stable baseload power supply, to renewables, which can fluctuate with weather conditions, could play havoc with China’s electricity network, officials say.

A senior manager in charge of dispatch at China’s State Grid (STGRD.UL) – the world’s largest utility, which manages 75% of the country’s network – told Reuters the system had already “reached its ceiling” of how many renewable sources it could handle and still maintain stable operations. The official asked to remain anonymous as he is not authorised to talk to the media.

But China, which runs the world’s largest power system, with a total installed capacity of 2,201 GW compared with 1,107 GW in the United States, is pressing on.

By 2030, it has said it will force grid operators to buy at least 40% their of power from non-fossil fuel sources, up from around 28% now.

Alex Whitworth, a research director at Wood Mackenzie, said that the pace of grid investment would most likely be maintained until the end of the decade, and would be five times higher than the cost of building additional renewable plants in that period.

At least seven new ultra-high voltage power lines would be built over the next five years to better connect the country’s far western regions, where solar, wind and hydropower plants are mainly located, to China’s big cities, the State Grid said. China has 29 such lines already.

That buildout could cost an estimated $34 billion.

“We have reached a consensus that China will preserve coal plants, but only for emergency uses,” said Shu Yinbiao, president of Huaneng Group, China’s second-largest power generation firm, and a former State Grid president.

But China is struggling to promote costly modifications to coal plants allowing them to offset gyrations in renewable power. It typically costs 150 million yuan ($23.27 million) to upgrade a 300-megawatt coal plant.

Only about 10% of coal-fired power plants in China have been modified, according to data from State Grid and China Electricity Council.

“China will need to establish a mechanism to make coal power unfavourable in the renewables’ booming moment,” said Zhang Shuwei, a director at Draworld Energy Research Centre. “Otherwise China is not able to advance its green agenda.”

Power storage is another obstacle.

Bing Han, a senior research analyst at IHS Markit, expects China to need about 120 GW of energy storage to support additional solar and wind power needs by 2030. That is four times more than the 32.3GW capacity in place as of 2019, according to China Energy Storage Alliance.

But it is not just a question of cost. Chinese officials have said they are worried about slow technological developments.

“Power storage technology has not realized revolutionary progress,” said Li Gao, director of Climate Change Department at the Ministry of Ecology and Environment at a media briefing in April.

“It’s not to say China cannot innovate, but it could take longer until China has its home-grown innovation,” she said.

Other analysts questioned China’s commitment to renewable power plans given its lack of clarity on phasing out coal and continued expansion of new power plants. China put 38.4 GW of new coal-fired power capacity into operation in 2020, more than three times the amount built elsewhere around the world. read more

But all agreed tackling the power system is an essential first step of a project critical to the future of the planet.

“The world just can’t achieve climate targets without China,” said LSE’s Xie. “China’s role in the world is now of a magnitude that makes its actions in the immediate future critical to how the world goes forward.”