More Sizzle Ahead for U.S. Oil Market as Supplies Decline

Not That Easy: White House Sees ‘Challenges’ in Diverting Energy Supplies to Europe 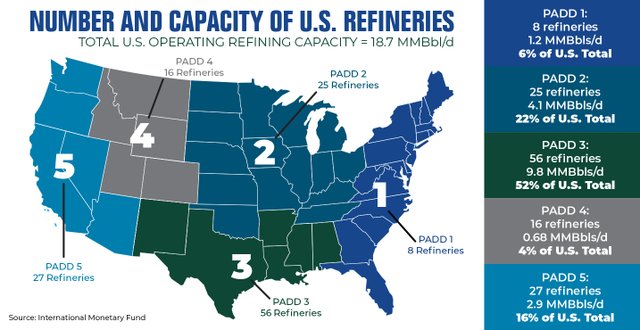 Operable capacity in Petroleum Administration for Defense District (PADD) 3 has grown considerably over the past 30 years.

When it comes to the petrochemical industry and refining, the outlook for energy manufacturing (as well as LNG exports) is tied to the global economy. According to the Gulf Coast Energy Outlook for 2020, there could be “considerable headwinds” that would push against capacity investments that have been made during the past several years and new capital investments over the next three years.

“Ongoing trade tensions impact industrial projects in the region in numerous ways, from raising their cost of development to creating a degree of uncertainty that is never conducive for large capital investments,” the report stated. “Despite these uncertainties, the near-term outlook for U.S. and Gulf Coast energy production continues to be solid given the strong ongoing productivity gains that will continue, particularly in the Permian Basin and offshore Gulf of Mexico.”

The Gulf Coast Energy Outlook for 2020 was conducted by the LSU Center for Energy Studies, and its findings were recently reported in Baton Rouge, Louisiana. 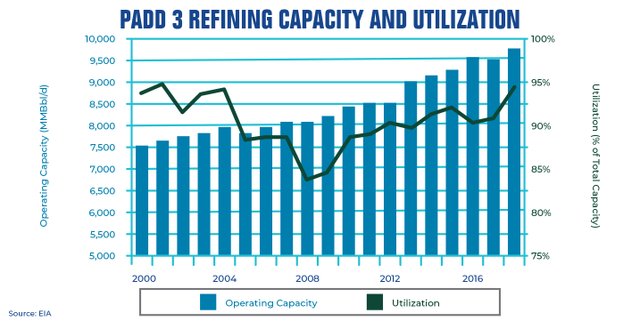 The past several years have seen not only considerable growth in Petroleum Administration for Defense District (PADD) 3 refining capacity, but also a considerable increase in the operating utilization of that capacity. Over the past several years, PADD 3’s refineries have been operating at around 90 percent, a level comparable to and likely driving the national average.

According to the outlook, the Haynesville Shale is currently at record production and above its 2012 peak. The play’s overall production went from 5.8 billion cubic feet per day (bcf/d) in December 2016 to 11.5 bcf/d in January 2019. The offshore Gulf of Mexico should also continue to maintain its steady and sustained production gains through deepwater and ultra-deepwater developments.

When it comes to Gulf Coast refineries, capacity has been increasing annually at an average rate of 1.5 percent per year, and the Gulf Coast region is anticipated to experience as much as $308 billion in new capital investments.

“This investment averages to about $15 billion per year along the Gulf of Mexico over a 20-year period,” said David Dismukes, executive director of the LSU Center for Energy Studies.

According to Dismukes, through 2018, all Gulf of Mexico states — mostly Texas and Louisiana — experienced as much as $113 billion (about $14 billion per year) of new investments. Louisiana received the larger share of this investment ($62 billion or 55 percent), while Texas received as much as $50 billion (44 percent).

A breakdown of upcoming Gulf of Mexico investments by sector shows LNG export facility investments make up a large portion.

“In Louisiana, chemical exports have increased 270 percent since 2009,” Dismukes said. “This has been facilitated by new capacity investments. As much as $195 billion in investments remain but are heavily concentrated in LNG export facilities.”

The Gulf Coast Economic Outlook for 2020 also anticipates modest increases in employment in Texas and Louisiana in the coming years.

In total, the forecast expects Louisiana and Texas to gain approximately 2,500-7,000 jobs in refining and chemical manufacturing by the end of 2022. This is approximately a 7-percent increase over the next five years.

The Gulf Coast region is anticipated to experience as much as $308 billion in new capital investments over a 20-year period. This investment averages to about $15 billion per year along the Gulf of Mexico.

The World Is Conspiring to Make Gas Cheaper: David Fickling