Shocker! Getting rid of an old wind turbine is proving to be quite an issue and a high expense, showing renewables are neither free nor especially green.

Restoration activities include the removal of all physical material and equipment related to the project to a depth of 48 inches. Most of the concrete foundations used to anchor the wind turbines, however, are as deep as 15 feet. The concrete bases are hard to fully remove, and the rotor blades contain glass and carbon fibers that give off dust and toxic gases. 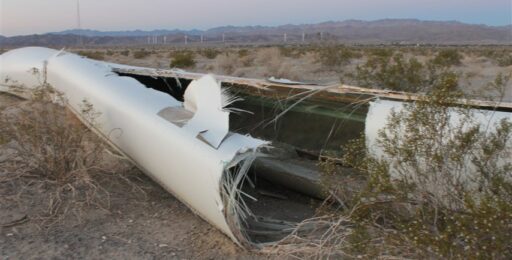 While most (90 percent) of a turbine can be recycled or be sold to a wind farm in Asia or Africa, researchers estimate the United States will have more than 720,000 tons of blade material to dispose of over the next 20 years, a figure that does not include newer, taller higher-capacity wind turbines.

Wind turbine blades are made of a tough but pliable mix of resin and fiberglass—similar to what spaceship parts are made from. Decommissioned blades are difficult and expensive to transport. They can be anywhere from 100 to 300 feet long and must be cut up on-site before getting trucked away on specialized equipment to a landfill that may not have the capacity for the blades. Landfills that do have the capacity may not have equipment large enough to crush them. One such landfill cuts the blades into three pieces and stuffs the two smaller sections into the third, which is cheaper than renting stronger crushing machines.

One company has found a way to recycle blades by grinding them up to make small pellets that can be used for decking materials, pallets and piping. The company opened its first processing facility in central Texas this year and is leasing a second space near Des Moines, Iowa.

Given that the United States now has almost 100 gigawatts of wind capacity and that the life span of wind power is generally 20 years—much less than the traditional capacity it is replacing—finding technologies for recycling of the parts is becoming extremely important. (This shorter lifespan of this capital investment also means the replacement power needs to be recapitalized 2 to 3 times compared to power from conventional generation technologies, a little-discussed economic burden facing consumers in the future.)

In Europe, land is at a premium, and waste management rules result in some companies selling older parts to customers in Asia, Latin America, and Africa. Germany has over 28,000 wind turbines and by 2023 more than a third must be disposed of through decommissioning or sale to other countries.

New projects commit to set aside 2 to 3 percent of the capital cost each year for decommissioning, but it is unclear whether this amount is sufficient to cover the costs when the wind turbines are dismantled twenty or so years later. Costs of decommissioning depends on location—offshore or onshore—and the age of the technology as newer turbines are larger than the older models.

An offshore wind farm in the United Kingdom was decommissioned earlier this year. The Blyth offshore wind farm is a two-wind-turbine farm. One of the two wind turbines was recycled and reused for spare parts within the company’s onshore fleet, and the other was used for training purposes. The plant had a shorter life span than most commercial wind projects, operating for just 19 years. The company did not release the cost for dismantling Blyth, but indicated that it was similar to building the project. Re-powering of offshore wind farms is deemed unlikely because of the rapid evolution of the offshore turbine technology.

As with other aspects of renewable energy, the decommissioning of wind turbines was not planned out well in terms of their disposal when their useful life is over. Because wind turbines have a shorter life span than most other technologies, the dismantling of these units is already in progress in Europe and will soon be needed in the United States.

Due to the size of the units, landfills do not have the capacity or equipment to break down the huge rotor blades. Repowering is being done in Europe and some turbines are resold to developing nations. But, needless to say, it is expensive to decommission wind turbines and who pays when the funds are not sufficient to cover the expense is an issue.