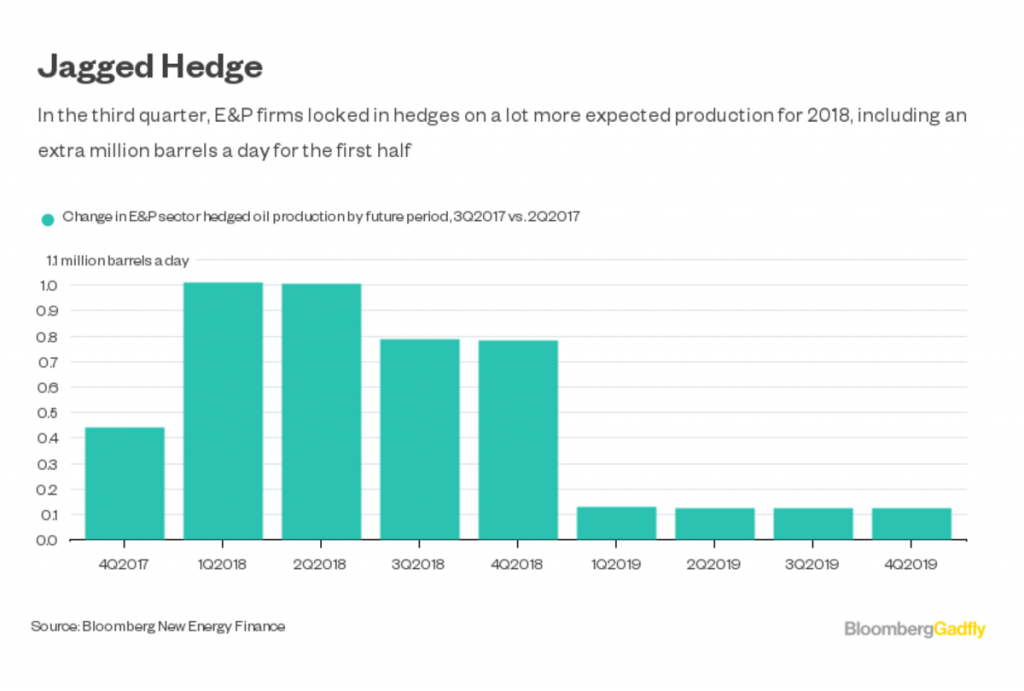 North America’s oil producers have adopted a meek tone of late. But the numbers suggest they’re locked and loaded heading into 2018.

One thing that leaps out from all the data is just how much of next year’s oil and gas production has apparently been locked in already by E&P firms — with one important caveat.

As I detailed here in April, producers often use hedges (such as selling futures) to lock in prices on expected output; managing their market risk and providing a modicum of certainty on cash flows for management, shareholders and lenders. Hedging is, along with the bond and equity markets, a financial mechanism to keep the shale machine running. And, as BNEF’s database shows, E&P firms have been cranking that mechanism at a furious pace of late:

That surge in hedging in the third quarter was no accident, as 2018 swaps prices for Nymex West Texas Intermediate rallied strongly from June’s trough:

Oil rallied on a combination of OPEC supply cuts finally coming through and a growing conviction they would be extended (which turned out to be right), along with some geopolitical spice.

There is some irony in this.

When OPEC, Russia and some other producers originally agreed to cut supplies a year ago, they touched off a rally in oil prices — and hedging by E&P firms, adding fuel to a recovery in U.S. oil output.

We appear to be witnessing something similar now. So far this quarter, the 12-month forward swap price has averaged $53.42 a barrel, a shade higher than for the fourth quarter last year; it is currently almost $55. The net short position of swaps dealers in Nymex crude oil futures and options — a proxy for producer hedging activity — also suggests E&P companies have continued locking in barrels:

Operators in the Permian basin, the center of U.S. tight-oil development, have tended to hedge more and at lower prices: 63 percent of 2018 output at a weighted-average price of $48.20 a barrel, according to BNEF’s database. Overall, hedging continues to take place around the $50-a-barrel level that seems like a threshold for putting drilling and completion crews back to work.

Timing is also critical. Look back at the first chart above, and you’ll notice the bulge of hedged production in early 2018. Even before we get any data on activity since September, the companies tracked by BNEF had locked in prices on almost one-third of their projected output for the first half of 2018.

This is important because OPEC will meet again formally next June to review its supply cuts, with key associate Russia (among others) thought to be keen to wind these down (presidential elections there in March could remove a big reason for sticking with them).

On Tuesday, the Energy Information Administration projected U.S. oil production to average 10 million barrels a day next year, surpassing the previous record set in 1970. Even if that is thought too optimistic, it muddies the water further for OPEC’s planning purposes.

The important caveat here is that even as they spent the third quarter locking in prices on extra barrels next year, E&P firms were extolling a newfound religion of value-over-volume to shareholders antsy about persistent overspending on drilling. So it’s possible that at least some of that accelerated hedging was less about underpinning growth and more about shoring up investor confidence in companies’ cash-flow stewardship.

Judging by Wall Street’s estimates, this view has some traction in the market. The chart below, from Bloomberg Intelligence’s Pulikkan, shows how the consensus estimate for oil production in 2018 from the companies in the BNEF database has evolved this year (some of this output is outside North America, but the trajectory is the important element):

One thing is clear: If all that hedging does result in a lot more North American barrels hitting the market in the next six months, then it will make for a lively gathering in Vienna next June.