Lithium batteries kill many more people than nuclear plants. Why, then, aren’t we scared of them? 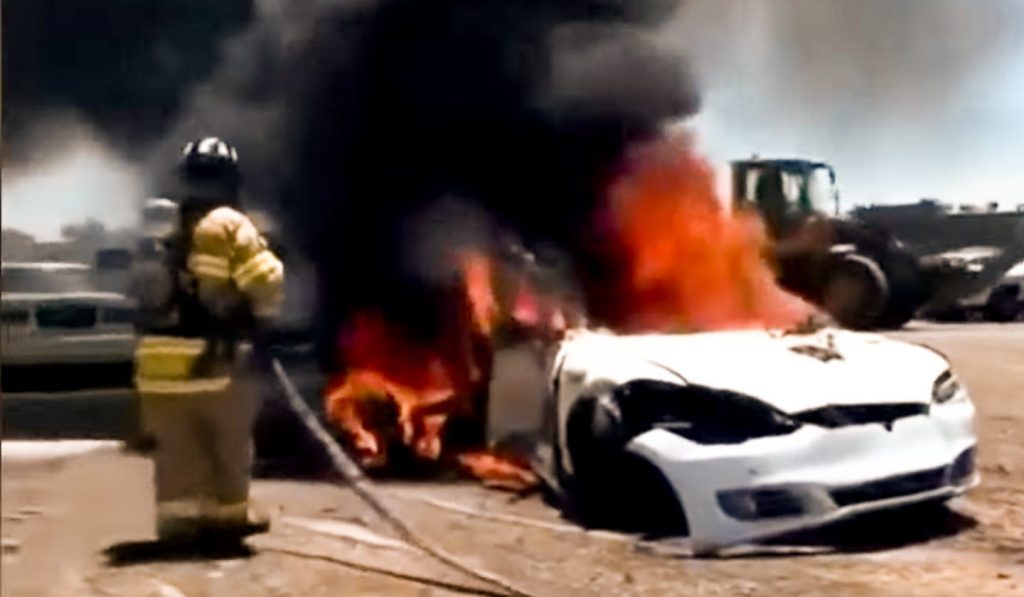 In June 2022, a Tesla electric car that had been in a crash three weeks earlier repeatedly ignited in a Sacramento junkyard, despite the lack of an external ignition source. (Sacramento Metropolitan Fire District).

For decades, critics of nuclear power plants have pointed to their unique danger. When there is a loss of water coolant for the reactor cores, plant operators can lose control, leaving them to melt, and potentially spew toxic particulate matter into the environment. Nuclear accidents are unique in requiring people to “shelter-in-place,” and close windows and vents, to avoid breathing radiant particulate matter. And nuclear accidents can unfold in unpredictable and mysterious ways, such as by creating hydrogen gas explosions, like the kinds that occurred during the Fukushima nuclear accident in 2011.

And yet nuclear plants remain the safest way to make electricity and one of the most benign of all human activities. Nobody has ever died of nuclear power in the United States, nobody will die from the radiation from the Fukushima accident in 2011, and only roughly 200 people will have their lives shortened by the fire and radiation from the Chernobyl fire. And because nuclear plants prevent the burning of fossil fuels, the climate scientist James Hansen calculates that they have saved nearly 2 million lives to date.

The ability to release intense amount of heat by splitting atoms did indeed bring a unique danger into the world, but it’s clear from decades of experience that the uniqueness of the danger of nuclear plants is how few people they kill, but how many they scare. Far more people were hurt from the too-broad and too long-lasting evacuations of Fukushima and Chernobyl than from their radiant particulates.

Meanwhile, a fire this morning at a Tesla battery facility in Moss Landing in Monterey County, California, emitted so much toxic smoke that the Fire and Sheriff Departments issued a shelter-in-place order, asking people to close windows and vents, and closing several roads. Contrary to widespread perception, shelter-in-place orders are not unique to nuclear accidents but are also used to protect the public from chemical fires and other accidents.

Lithium battery fires have, like nuclear accidents, been unpredictable, mysterious, and difficult to manage. The battery fires that grounded the first Boeing 787 Dreamliners in 2013 were difficult to control, and mysterious, A Tesla that had been in a Sacramento junkyard for three weeks spontaneously, repeatedly, and mysteriously caught fire. “The batteries would keep reigniting the fire,” said firefighters, who only were able to stop them by flipping the Tesla onto its side.

As such, lithium batteries are deadlier and as dangerous than nuclear power plants. This is obviously true in the U.S., where nuclear power has never killed anyone. But it likely also true globally worldwide, or will be true, given the rising death toll from lithium fires, over the next decade, and particularly if we were to calculate deaths on a per unit of energy basis, given how much more electricity generated by nuclear plants than stored and delivered by batteries.

All of this begs a question: if lithium batteries are so much dangerous than nuclear, why is nuclear so much more feared?

Why We Fear Nukes

The obvious reason people are so afraid of nuclear energy is the accidents. A nuclear accident is the biggest story in the world. Firefighters struggle to put out the fire and keep the reactor cores cool. Officials try to level with, and reassure, the public, which makes them distrust them more. Confusing radiation levels are measurably elevated. Local residents flee.

And the the accidents appear to absorb the broader societal trauma. The 1979 Three Mile Island Meltdown in Pennsylvania occurred just a few days after the release of anti-nuclear thriller, China syndrome, which was infused with post-Vietnam cynicism toward government and corporations. The 1986 Chernobyl incident came after years of Soviet stagnation, fears of nuclear war with the West, and growing internal demands for democracy. And the 2011 Fukushima accident occurred hours after roughly 15,000 people were killed instantly in a tsunami, and after years of growing distrust by the public of the government.

But fears of nuclear accidents are not evenly distributed but rather concentrated among liberals and older Americans. The association helps explain why liberals, who tend to oppose nuclear weapons, are more opposed to nuclear energy than conservatives, who tend to favor them. And the association helps explain why baby boomers who were taught to prepare for nuclear war through scary “duck-and-cover” drills in school are more anti-nuclear than their millennial aged children. Associations, however irrational, are powerful.

What’s missing from the explanation is the intense war waged against nuclear power by the liberal and radical Left starting in the 1960s. Malthusian conservationists opposed to economic growth, modern industrial civilization, and human beings in general fought nuclear power because it was so cheap, not because it was expensive. The anarchist or liberatarian Left fought nuclear because it required centralized energy production and they wanted more decentralized energy and food production. And progressives who favored publicly-owned electric utilities fought nuclear when it became a privately owned business.

Each of these groups preyed upon natural and understandable fears of nuclear through well-financed campaigns, backed by famous celebrities like Jane Fonda, who starred in and helped to get “China Syndrome” made, and which attracted millions of participants. There is no such movement against lithium. On the contrary, the same progressives who fought nuclear in the 1960s and 1970s are today the biggest supporters of lithium batteries, which they view as a way to address the inherent unreliability of weather-dependent renewables.

There is a final characteristic of lithium batteries that nuclear does not share, which is their banality and ubiquity. For much of the day, and at this very moment, a lithium battery is resting on my lap, in my laptop computer, as I compose this post. And less than one foot away is another lithium battery in my phone. Even if lithium batteries killed significantly more people, we would all still love them because they offer so much convenience in our devices and appliances. 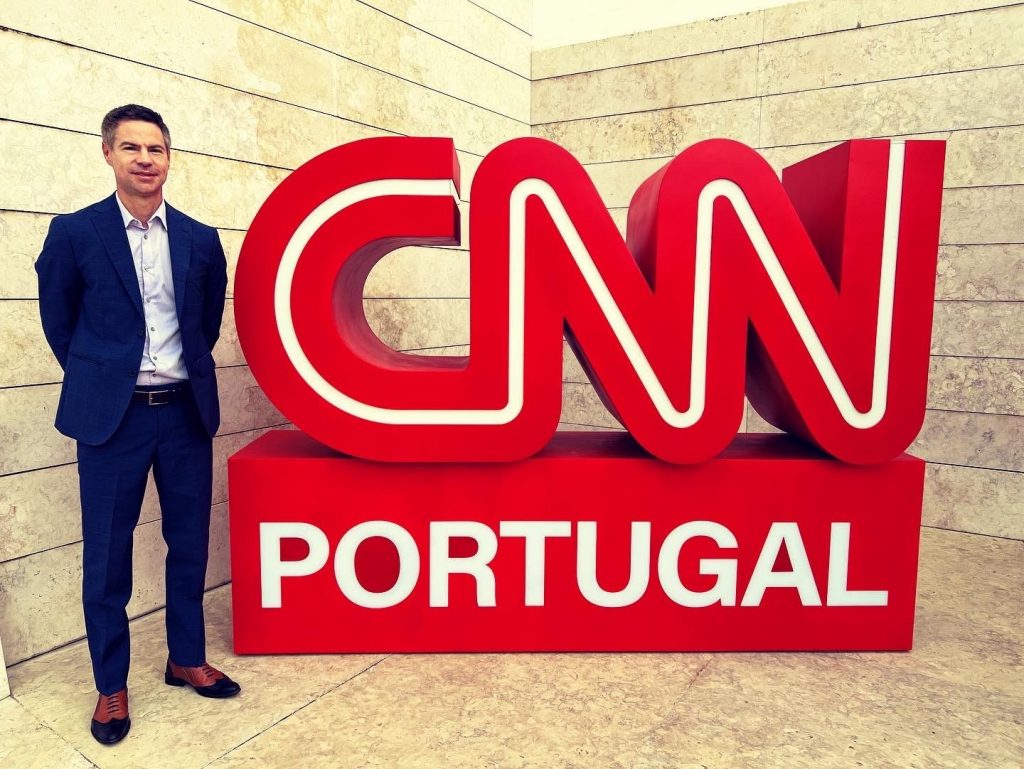 The author at a CNN Portugal event discussion nuclear energy on Monday.

Of the many challenges facing nuclear plants have been the fears swirling around the ones in Russia. Yesterday, accused Russia of “nuclear terrorism” following a missile attack near the South Ukraine Nuclear Power Plant. It left a hole 7 feet deep and 13 feet wide. Everybody rightly fears that if a missile hit the nuclear plant it could cause a meltdown and the spewing of radiant particulate matter across Europe.

But neither side has targeted the nuclear plants and their reactors are, like reactors around the world, encased in hardened cement containment structures that are capable of withstanding missiles and even jet plane crashes, something that the U.S. government demonstrated in 1988 by crashing an F-4 Phantom Jet into a concrete wall at 480 miles per hour. It doesn’t prove that nothing could go wrong, but does suggest that the loss of coolant, leading to meltdown, remains the main risk facing nuclear plants.

It has been interesting to me to observe that, despite the high drama over the Ukraine nuclear plants, which has been going on since March, governments around the world are affirming their commitment to nuclear energy, or exploring going nuclear for the first time. On Monday I was in Portugal as a guest of CNN to talk about nuclear energy. I was asked about waste, accidents, and costs — the usual fare — but not once asked about the nuclear plants in Ukraine. Instead, the big topic of conversation are the energy shortages ravaging Europe, particular the energy-intensive industries of Germany.

I think the lithium battery fires could similarly put nuclear into a broader context. It’s clear to me now that a big part of the reason people viewed nuclear energy as optional, rather than as necessary, for the last decade, wasn’t just because of Fukushima, but because of cheap natural gas. It’s the lack of cheap and available natural gas, and natural gas power plants, that is provoking governments in Japan, South Korea, and even California to return to, or keep operating, their nuclear plants.

Everything that once seemed new and dangerous about nuclear will increasingly seem old and safe. Nuclear wants to be boring, I believe, in the same way all older technologies are boring. Nuclear is, and will always be, unique. But the record is clear that it’s not uniquely dangerous; rather, it’s uniquely safe. Even in comparison to objects as banal and as ubiquitous as lithium batteries.