At a time when natural gas buyers are fighting over every last molecule, China — the world’s top importer — is noticeably quiet.

In stark contrast to rivals across the region, China’s liquefied natural gas importers aren’t procuring additional shipments for winter, gambling that the nation’s Covid Zero policy will continue to temper demand, said traders. A global supply crunch has made LNG very expensive, and traders don’t want to pay if the fuel won’t be needed.

A sudden rebound in Chinese demand for gas would force importers back into the cutthroat competition to procure LNG, exacerbating a worldwide shortage and sending prices — already at a seasonal high — to stratospheric levels.

It’s “an anomaly” for Chinese companies not to be buying LNG supplies on the spot market as winter purchases head into full swing, said Toby Copson, global head of trading and advisory at Trident LNG. “It means China isn’t stressed about supply – what they have available via gas pipeline and their domestic coal production seems to be sufficient for the time being.” 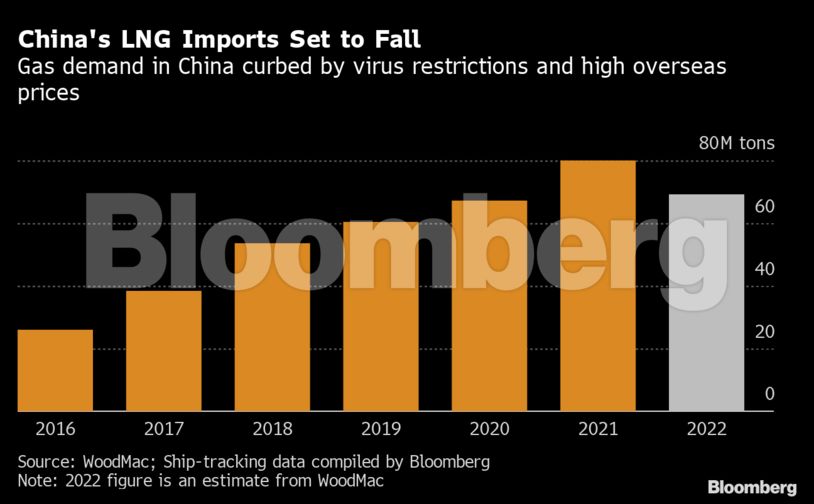 That comfort level led to a roughly 20% drop in LNG imports for the first six months of the year. China became the world’s top LNG importer in 2021, but is expected to lose the title this year.

China’s inactivity on LNG is providing opportunities for other buyers in Asia and Europe to shore up their gas inventories. Chinese firms are actually reselling spare LNG to energy-starved importers in Europe.

China has several options at its disposal to avoid expensive LNG shipments. The government is pushing miners to produce more coal, the main fuel for power generation, while also increasing cheaper pipeline gas imports and producing more at home. The nation’s coal output climbed to 2.2 billion tons in the first half of 2022, up 11% from a year earlier, the National Energy Administration said on July 22.

Fuel supplies are at manageable levels thanks in large part to weakened demand as China battles Covid-19 outbreaks. The nation’s economy narrowly escaped an economic contraction in the latest quarter as a series of rolling lockdowns shut businesses.

It isn’t clear how long this weakness will last. President Xi Jinping remains committed to his Covid Zero approach to stamping out infections, with Shenzhen this week becoming the latest city to face restrictions. Yet the economy showed signs of strengthening in July, and Goldman Sachs sees a rebound in activity over the next several months creating ripple effects across Asia and Europe.

A return of Chinese demand will increase competition from Asia for LNG cargoes, Goldman analysts said in a report Monday. That will leave less supply for Europe and require the region to further cut consumption to ensure storage levels are “comfortable” ahead of winter, they wrote.

“Right now, the lockdowns have impacted industry, and China is working through the backlog of industrial activity and demand,” said Trident LNG’s Copson. “If one of the biggest buyers in Asia comes back for volume when the rest of North Asia is competing with Europe – that’s a massive liquidity grab.”

A sudden drop in temperatures could also prompt China to buy LNG. That’s what happened in January 2021, when a cold blast caught many Chinese importers flat-footed, draining inventories and forcing a flurry of spot buying that sent prices soaring.

–With assistance from Kathy Chen and Luz Ding.