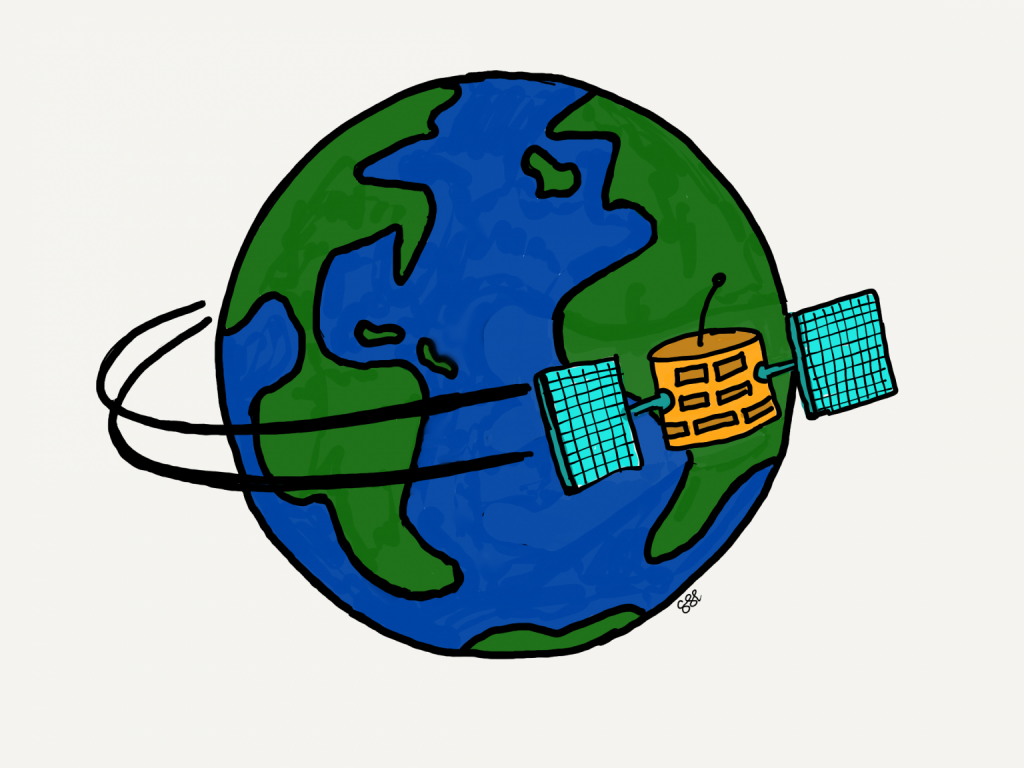 Dramatic changes in satellite technology are bringing out-of-this-world capabilities to the oil and gas industry. It’s a surprise that few seem to be taking advantage of it.

Digital Thinking Comes To The Heavens

I can’t remember the first time that I saw a satellite passing by overhead, but it would have been many years ago. Most likely it was in July or August here in the northern hemisphere, where the evenings can be warm, and the mosquitos a terror. Most likely I was lying on a beach and staring at the stars, when I spotted a tiny but rapidly moving little light in the sky, much faster than an aircraft. I added this to another early memory from the 1960s, at my grandparent’s home (they had a TV!) when we watched very grainy images of astronauts walking on the moon.

Perhaps 15 years ago, I took the kids out early one winter evening to a viewing point just south of Calgary to catch a glimpse of the International Space Station passing overhead. Calgary is a kilometer above sea level, and offers great views of the night sky.

Spotting satellites used to be rare and a little magical, but not anymore. Last summer I found myself out in the wilderness far enough from a big human settlement to see the night sky in its full glory. In the space of just a few minutes, we picked out a handful of satellites on the move.

In the past few months I’ve been contacted by a number of companies working with satellite data in oil and gas. Satellites to an industry professional are quite probably the new iPhone to a teenager. They open up a new world of possibility and are disruptive to the industry’s norms.

Satellites have historically been the domain of government-funded institutions with their fortunes tightly linked to the rocket launch business. Getting an object into orbit was a costly affair, because the rockets themselves were a costly business. Remember brands like NASA, ESA, and JPL?

However, companies like SpaceX, Virgin Galactic and Amazon Blue Origin have been transforming rocket launches by bringing the iterative development model (or agile) to the rocket business. These companies have permanently upset the traditional approach to rocket design and space travel. Their success is hard to dispute. SpaceX, for example, suffered 6 consecutive launch failures when they first began, but then launched 111 successfully in a row. Launches are no longer even newsworthy events.

SpaceX’s rockets are gigantic, and can lift extraordinary loads, relative to the loads from 50 years ago. Historically, the cost of the launch meant that the payload such as a satellite had to be shrunk by weight and volume so that each launch maximised its load. Today’s rocket companies don’t face that constraint to the same degree, which means much less time and money is spent retrofitting gear for space travel.

Newer rockets try to reuse as much of their equipment as possible, such as fuel tanks and launch rockets, not by dropping them empty into the ocean for recovery but by flying them back and landing them where they can be quickly reused. Some components can turn around in a day or so.

These design concepts (large scale, return to base, high reusability, fast turn around, iterative improvements) mean that the frequency of launches is rising fast and the cost is falling quickly.

In the same way that private companies have taken over the rocket business, new satellite makers are transforming satellites using techniques perfected in the computer industry:

Off the shelf components. Some technology is proprietary (small scale satellites are really only 7 years old as a technology), but much of the kit includes off the shelf technology. This includes sensors like cameras for visual data, GPS for location detection, and telecoms chips.

Factory build. The first satellites were hand-tooled, one at a time, much like a high end sports car, with unique, one-off parts and assemblies. Newer satellites are mass produced, with plants churning out a new satellite every 4 hours on an 8 hour shift, 5 day a week. Mass production helps generate enough payloads to keep pace with the ability of the rockets to launch.

Low deployment cost. By residing in low earth orbit, the satellites have lower launch costs as they arrive at their final location quickly. Low earth orbit is 450-700 miles above the surface, compared to geo-stationary satellites that are 22,000 miles up. Repositioning satellites is possible but costly in terms of on-board fuel.

Volume over quality. These newer satellites operate as a networked constellation, communicating with each other to share the load and back each other up. There are fewer single points of failure and a more resilient design. Regulatory submissions for telecoms companies seek permission for many thousands of units in orbit.

The result of all this expansion is that the satellite industry is somewhat over built, particularly the segment that supplies imagery. Indeed, there is an overhang of data already accumulated that has yet to be processed or consumed. One new business model even contemplates charging only for interpretation of selected images, rather than charging for taking the images, transmitting the images to earth, and storing the images (such services are now of so little value that they are effectively free).

Satellites in Oil and Gas

The oil and gas industry is particularly well suited to take advantage of these new in-space data boxes.

The industry’s individual assets are widely distributed. From off shore platforms far from telecoms lines, to the remote oil and gas basins in Texas, to the northern bitumen basin in Canada, to the jungles of Venezuela, the industry’s assets are often very distant from settlements. Many are still manned, with crews visiting regularly or stationed permanently on site.

Some industry assets are networks. Pipelines, for example, stretch hither and yon for millions of kilometers. The typical way to monitor the assets are through infrequent, expensive and crash-prone fly-overs, via single engine aircraft (small planes and helicopters).

Accessing the assets incurs high mobilization cost. The most unsafe activity in oil and gas is not drilling, or fracking, or even hanging around a refinery. It’s driving to and from the assets.

The assets are increasingly vulnerable to environmental disruption caused by climate events. With fewer places to build, pipeline companies are resorting to the flanks of mountains, which are more likely to suffer from washouts during periods of heavy rain.

These assets need continuous supervision. Regulators and society are much less tolerant of integrity issues, such as gas leaks and oil spills. A once a year fly over is no longer fit for purpose.

Intelligence about the industry is very valuable. For example, the presence of equipment, recently cleared land, or freshly cut roads, can signal change in a location that can translate into investment opportunities.

The upstream industry, in particular, is struggling to access sufficient capital to fund growth, and so must continue to overhaul its ways of working to lower costs and improve productivity to generate the funds it needs.

Here are just a handful of compelling use cases to consider.

Oil and gas platforms have long relied on traditional expensive satellite communications services. Work on the platforms is designed around this constraint. Unlimited broadband to an offshore platform opens up possibilities like augmented reality in the field, collaboration with shore facilities, seamless work planning with on-shore, and Netflix in every room.

The protection of people is built into every mission statement in oil and gas, but travel is the greatest risk. The value of always available telecoms for travelling workers is game-changing. Worker down can be instantly detected regardless of location, and accelerate life-saving response.

One of the change challenges in oil and gas is providing worker training in remote settings. It’s too costly to fly workers to a training facility, but low cost broadband brings high quality training directly to the worker.

The impact from natural events, like fires, floods, earthquakes, cyclones, and tsunamis (and the man-made ones like wars) are often hard to detect until eyes are on site. The frequency of satellite images of a particular location (as much as once every few minutes) provide valuable intelligence about rapidly evolving situations. Coordination of response benefits from better telecoms and imagery.

Recall how satellite imagery revealed the buildup of Russian forces on Ukraine’s border in January. Instead of humans looking over a handful of satellite images, imagine an algorithm that quickly scans thousands of photos and identifies frack spreads in new locations, land being cleared for new wells, or new roads being cut. There is significant value in such intel.

EQUIPMENT AS INTERNET OF THINGS

The promise of the internet of things can finally be realized at the industry’s remote assets. Machine-to-machine connectivity can move many optimization activities to algorithms that run in the cloud, don’t sleep and require little supervision.

North America alone has a million or more wells, and few have constant eyes-on surveillance. Satellites create the potential to connect up every well continuously, not with one occasional or scarce telecoms line but with persistent broadband. By adding sensors to these wells, operators can monitor and operate them remotely with higher confidence and a greater range of control.

Rocket and satellite technologies have so thoroughly transformed as to be unrecognisable from 10 years ago. Not so oil and gas work practices and business designs that treat telecoms and imagery as costly and constrained. It’s time to bring space down to earth and help the oil and gas industry improve its performance.

WE Have an App for That: Payload Technologies

Decentralized energy markets [in the metaverse] can reduce reliance on government funding for much needed energy projects
What would a 70–90% reduction in water use mean to your operation?
CASE STUDY: Increasing Production 4X and Permeability 4.9X with Waterless Fracking Innovation
WATCH: The energy industry is answering the call for a sustainable future. Ventbuster Instruments has the tools and technology that make it possible.