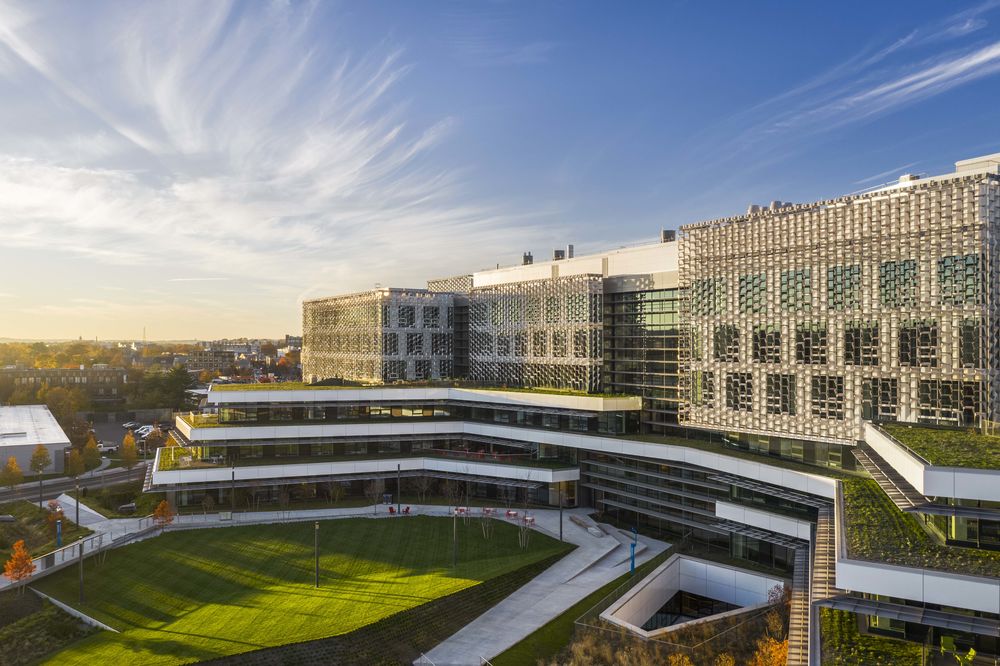 A mix of high-tech and old-fashioned energy efficiency tactics can deliver carbon-neutral buildings, right now. But the U.S. needs to pick up the pace.

Is it too much to ask Americans to take their foot off the gas and reset their thermostats? On March 18, the International Energy Agency released a 10-point plan for reducing oil use, arguing that advanced economies can readily cut demand by 2.7 million barrels a day in the next four months, an amount large enough to avoid major supply shortages as Russia’s invasion of Ukraine roils the energy market.

The plan’s major prescriptions will look familiar to anyone who recalls the OPEC shocks of the 1970s: reducing speed limits to improve gas mileage, boosting transit use, and discouraging non-essential car and air travel. But its exclusive focus on the transportation sector overlooks the substantial efficiency gains to be had from the built environment: Buildings consume about 40% of the energy used in the U.S. every year.

Yet reducing energy use in buildings has been stigmatized by fossil-fuel interests as a lifestyle deprivation — an argument that’s been internalized by pundits and politicians even as geopolitical turmoil drive spikes in oil prices and climate change impacts upend millions of lives.

That’s not the case: There’s ever-growing panoply of efficiency measures — better insulation, improved heating and air-conditioning, less-polluting appliances — that could help the building sector rapidly decarbonize. By 2030, almost all new buildings could consume zero net energy — net meaning there’s some give and take from the grid to equal zero use. That’s a big deal, especially with a corollary switch to electrified forms of transportation.

“Acting at scale is so eminently possible,” Lindsay Baker told me. She is the CEO of the International Living Futures Institute (IFLI), which runs the Living Building Challenge, an extraordinarily rigorous certification program that has pushed the building industry to achieve energy use reductions deemed all but impossible a few years ago. 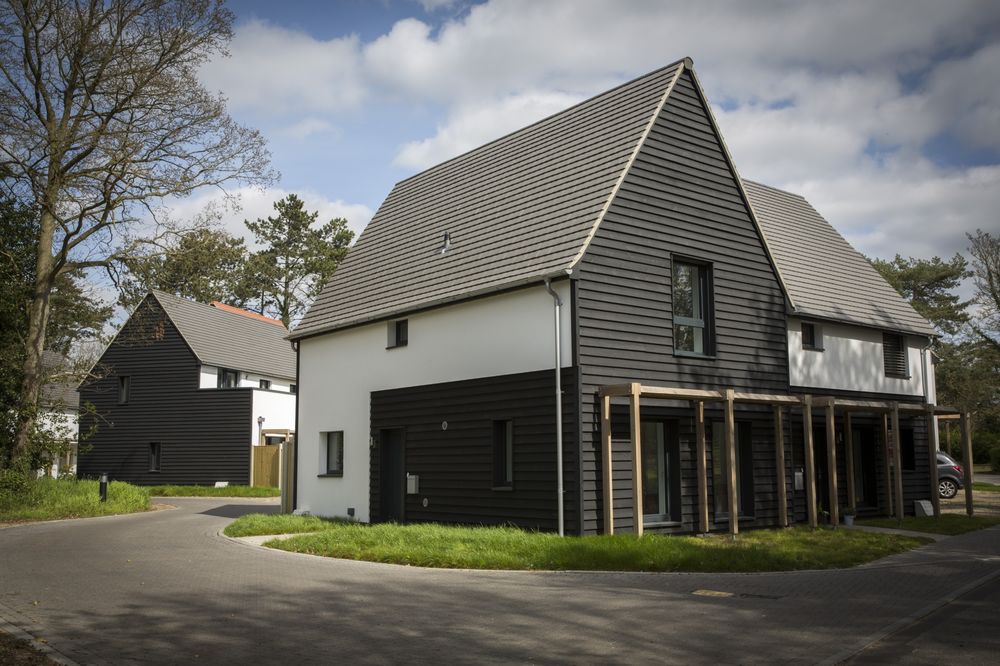 Achieving scale will require augmenting now-modest government incentives. The $1.5 trillion spending bill signed by President Joe Biden in March includes $3.2 billion to retrofit homes for energy efficiency. Germany, by contrast, is “doubling down on energy use reduction,” says Thomas Auer, a principal of the Stuttgart engineering firm Transsolar, which wrings new usefulness out of old-fashioned techniques like daylighting, natural ventilation and shading to reduce energy use.

Germany’s energy shift is being sped up not only by the urgency of the climate crisis, but by the need to stop subsidizing unfriendly regimes. The country has pledged to wean itself fully from Russian gas by 2024, even halting the certification of the Nord Stream 2 pipeline immediately before the invasion. That’s an extraordinary commitment from a government that imported more than half of its natural gas from Russia last year.

In saving energy, “there are no silver bullets,” says Richard Maimon, a partner at Philadelphia’s KieranTimberlake Architects. But neither is any moonshot needed. Efficiency-oriented tech tools — sensors, controls, and advanced energy modeling — are multiplying, and many tactics await only economies of scale to ease wide adoption. 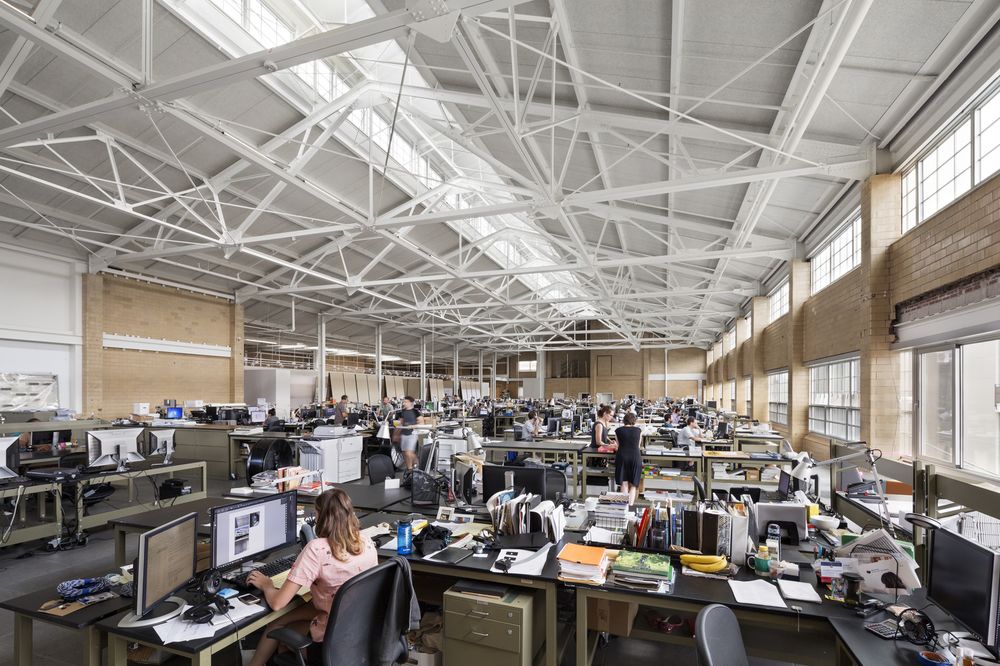 The Philadelphia offices of architect KieranTimberlake were adapted from a former beer-bottling plant, which harvests natural daylight and ventilation from the rooftop clerestory.
Photographer: Michael Moran Photography Inc.

Paul Schwer managed to get his 1967 ranch house in Portland, Oregon, to net zero energy by following the new energy-reduction mantra: Electrify everything. He replaced a gas-fueled furnace and hot water heater with electric heat pumps — “people don’t appreciate how efficient they have become over the last 10 years,” he says — and the family’s new stove is an electric induction model. Buildings can dramatically reduce their carbon footprint by removing anything that relies on oil or natural gas for fuel, assuming that grid power succeeds in ultimately eliminating fossil fuels — a big if. “The entire West Coast is on track to source 100% of its power from renewables by 2040,” Schwer says, but other parts of the country are not moving so quickly.

Schwer is the president of PAE, an engineering firm that has designed the mechanical, electrical and plumbing systems for some of the lowest-emitting buildings in the U.S., including a 58,000-square-foot net zero building the company built for itself in Portland that deploys straightforward tactics like openable windows, abundant natural lighting, a well-insulated exterior and radiant floor heat — all augmented by a solar array. 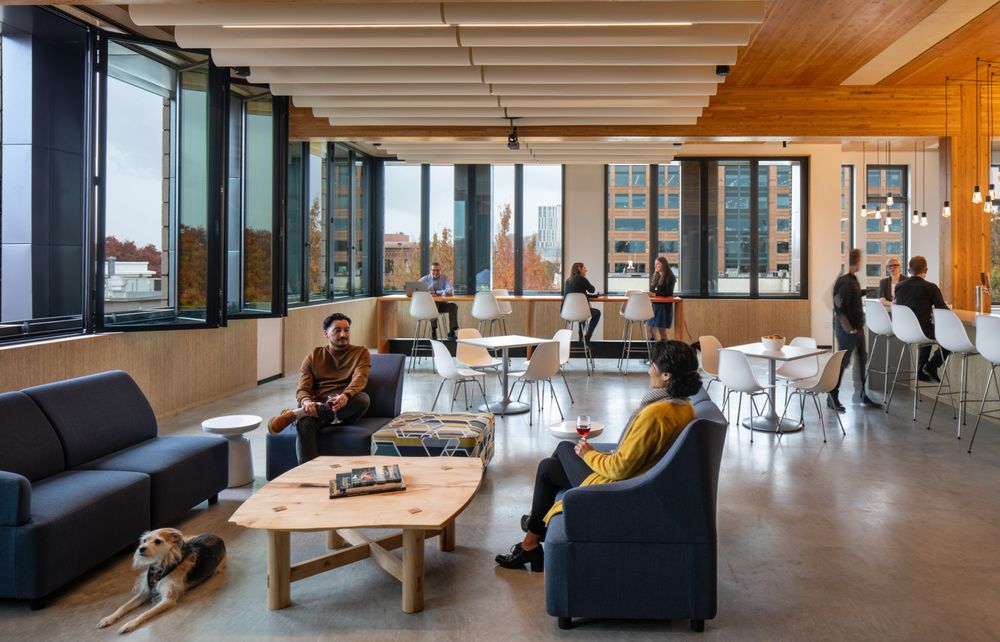 The headquarters of PAE Engineering in Portland, Oregon, saves energy with ample daylight, windows that open, and radiant heating in the floor. The engineering firm designed the building with ZGF Architects.
Photographer: Lara Swimmer

Such measures could be easily adopted on a mass scale. “The vast majority of American buildings are three stories or less,” Schwer says, which makes them easier to retrofit for energy efficiency. Those improvements alone can reduce energy use by as much as 80% compared to existing buildings; adding renewables can “bring those buildings to net zero emissions now.”

For new construction, the demanding Passive House regime — imported from Europe — can reduce power demands by about 75% by relying on heavy insulation of the roof and walls while obsessively eliminating air leaks. Prefabrication can deliver that high energy performance while lowering construction costs. But shading, natural ventilation and daylight are free “passive” quantities, which work better in Auer’s view when people accept modest temperature variations rather than remaining fixated on sealed buildings that waste enormous amounts of energy to maintain 72 degrees Fahrenheit everywhere all the time.

In Riverside, California, intimate landscaped courtyards are shaded by three-story office wings and industrial testing structures at the 403,000-square-foot headquarters of the California Air Resources Board. Designed by the Portland architecture firm ZGF and built to house labs and facilities that test autos seeking to meet California’s strict tailpipe emissions standards, the building is billed as the nation’s largest zero-carbon building. Other passive tactics include broad roof overhangs and louvers that protect windows from the punishing heat of the California sun. Indirect daylight reduces the need for electric lights.

The CARB facilities “have very demanding operational issues,” says Chris Chatto, a principal at ZGF. The facility’s testing areas squeeze kilowatts through a variety of mechanical upgrades, supplemented by a substantial solar array. Instead of conventional air conditioning, the facility is cooled with a chilled beam system, which can use one-fourth the energy of conventional fan-driven HVAC systems that blast conditioned air through bulky ductwork. The only fossil fuels consumed on the premises are those in the gas tanks of the vehicles being tested. 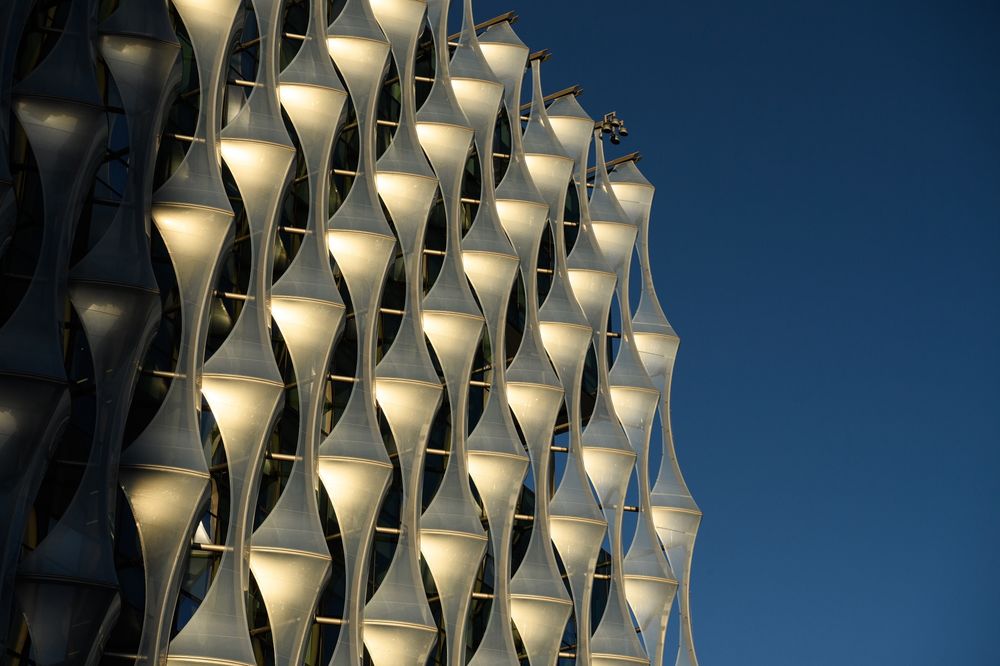 The facade of the U.S. embassy in London, designed by KieranTimberlake, can both minimize heat gain and prevent bird strikes.
Photographer: Leon Neal/Getty Images Europe

The architecture firm KieranTimberlake is known for its innovative approach to energy efficiency — most famously in its 2017 U.S. embassy in London, which bristles with solar-heat deflecting sails made of a transparent fabric called ETFE. Its Philadelphia headquarters, a red brick 1948 International Style building, is a showcase of low-energy tactics, including a restored operating glass clerestory at the top of the roof that assists natural ventilation and bathes the studio in daylight. Among the most important was the choice to restore and adapt the building itself, which had long bottled Ortlieb beer.

The firm developed a digital tool called Tally to calculate the carbon emissions embodied in the manufacturing of an existing building’s materials and compared that to the carbon that would have been emitted by the construction of a new net zero building. “We found we would have to operate the new building 186 years to get the carbon payback,” says Efrie Escott, a member of the firm’s research group. 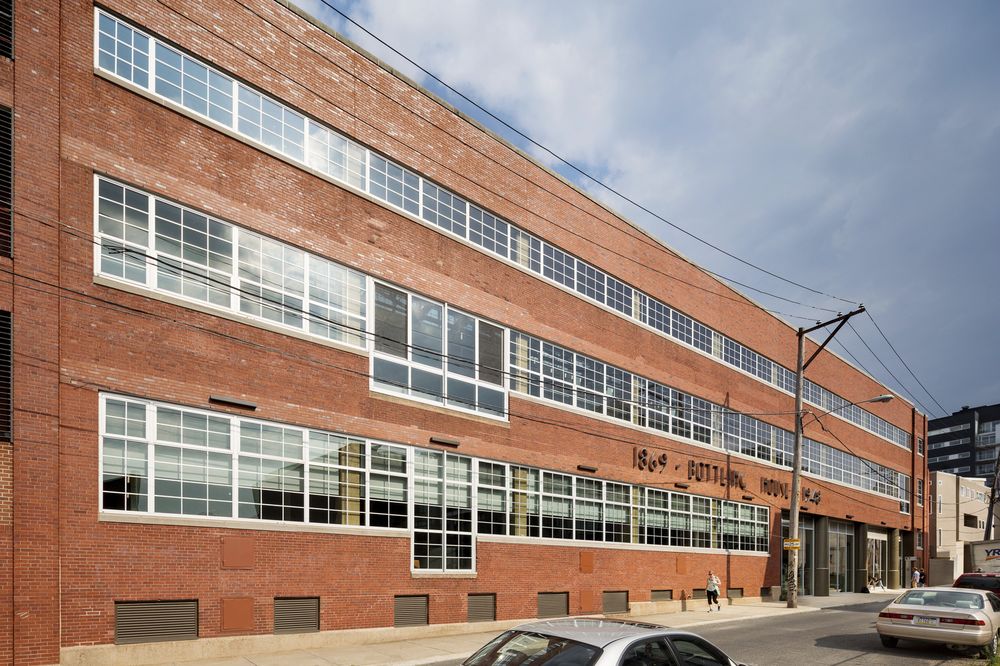 Calculating embodied energy is becoming more important, because the “carbon density” of materials and products used to construct a building represents a high percentage of its total carbon footprint. That’s why KieranTimberlake and others strive to avoid tearing down structures that can be saved and adapted. Construction materials like concrete, steel and aluminum are among the “evil actors,” says Floris Buisman, the CEO of 475 High Performance Building Supply, a Brooklyn-based supplier of green building products. “Their carbon density is through the roof.”

Embodied energy is one reason cross-laminated timber (CLT), also called mass timber, is taking the building industry by storm. These are columns, beams and panels made of glued-together strands of wood — a far more climate-friendly building material. “Because CLT can replace steel and concrete in many cases it is really helping lower our carbon footprint,” says the ILFI’s Baker. U.S. building codes will soon permit its use in buildings as tall as 18 stories. 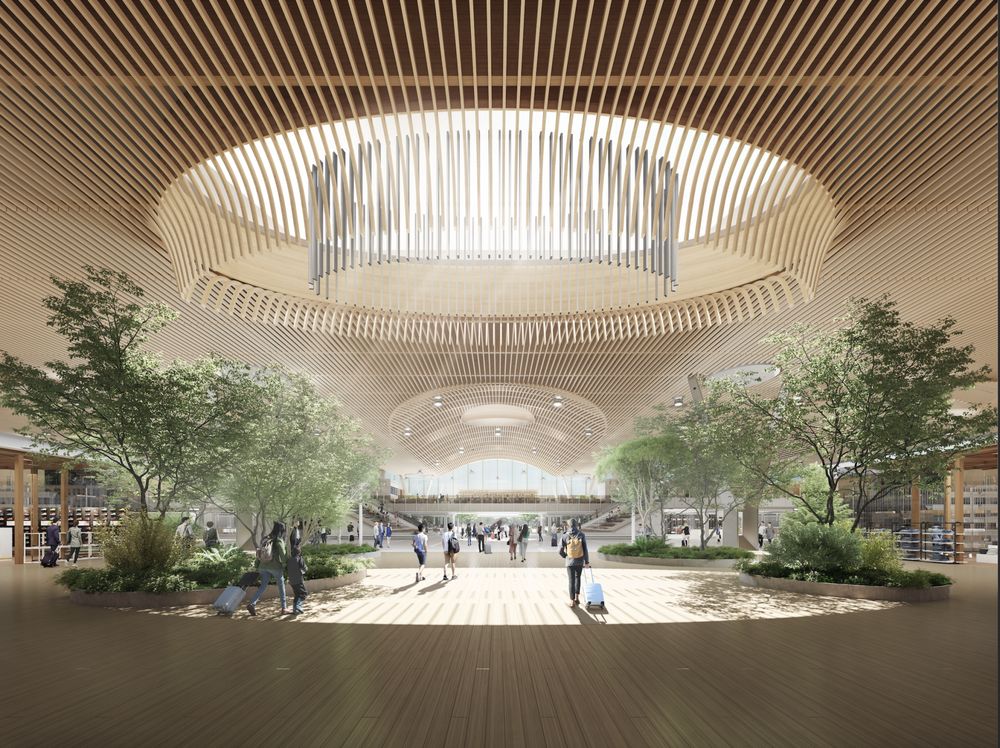 The roof of ZGF’s new terminal for Portland International Airport will be constructed from locally sourced cross-laminated timber.
Credit: Port of Portland

Mass timber can also make for striking-looking spaces: ZGF’s plan for a new terminal building for Portland International Airport features a 380,000-square-foot undulating roof of beams, rafters and plywood panels manufactured from mass timber sourced from local suppliers. With vines suspended from skylights and trees planted beneath, the dappled light “will be like walking through a forest,” says Chatto.

There’s no shortage of compelling reasons to encourage emission-cutting tools and tactics such as these, whether to conserve cash, save the planet or undermine petro-tyrants. Here’s one more: The race to net zero would trigger a U.S. green-job-building boom. Right now, other countries that have strategically targeted this sector are ahead of the curve: Almost all of the energy efficiency products that 475 High Performance Building Supply sells are imported, says Buisman, many from Germany.

There’s still plenty of opportunity for the U.S. to catch up, but zero-emissions technologies will require more than just lip service from policymakers. And everyone, says Transsolar’s Auer, can join this race: “Just stop wasting energy.”

James S. Russell, FAIA, is a journalist and consultant who focuses on architecture and urban growth and change. He wrote The Agile City: Building Well Being and Wealth in an Era of Climate Change.