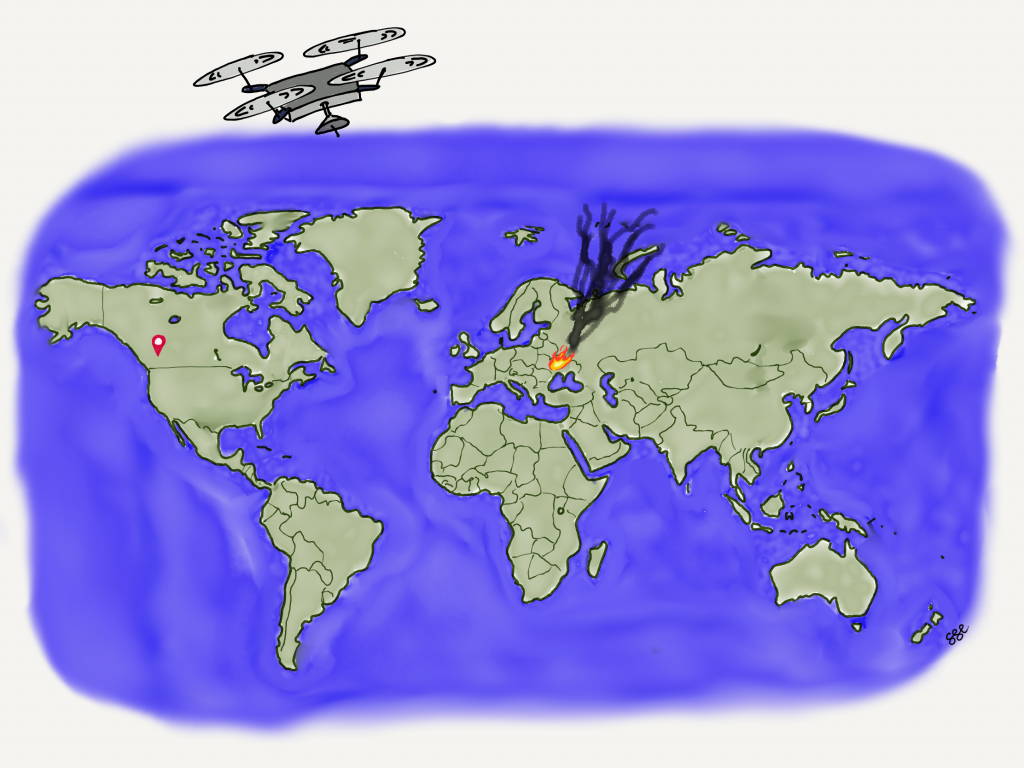 The world is getting a stark lesson on energy geopolitics and energy security in light of Russia’s invasion of Ukraine. How do various digital innovations play into, and help reframe,  the geopolitical landscape of energy?

The first version of this post was published on November 19 of 2019, and with the war in Ukraine underway, it seemed timely to reprise.

It’s useful from time to time to view the decisions that major energy exporting nations are making that impact the energy security profile of consumer nations, and the risks of man-made catastrophic supply disruption, including the aftermath of the pandemic and the Russian invasion of Ukraine. Digital issues factor into this kind of analysis, which gives rise to the question: how does digital innovation play into the geopolitics of the global oil industry?

We’re all getting schooled on the intriguing world of oil politics, including some of the following considerations that international oil analysts ponder daily.

OPEC, the club of energy exporting countries, is a major player in the world of oil and gas exports, shipping some 24m barrels of oil every day. Oil volumes are picking back up in the spring-back of western economies from the pandemic slowdown. Recall that OPEC and Russia had a self-own in their ill-timed volume war in January 2020 when the impact of the virus was becoming apparent. Investment in new oil production was crimped during the pandemic (and had already drifted below long term norms), and now with markets surging, OPEC is holding the line on oil production increases.

This could be because there isn’t any spare capacity to bring to the market. It could also be a move to keep prices high so that OPEC’s treasury recovers.

Because of OPEC’s importance to global oil markets, most nations treat OPEC countries with a good deal of latitude. Even the US, which had been giving Saudi Arabia the cold shoulder, recently appealed to the Kingdom to open the taps.

Qatar was a member of OPEC since 1961, and withdrew in late 2018, as it produced only a piddling amount of oil and was increasingly gas dominant. Today, Qatar is a very big gas supplier to the world, via its liquefaction terminals, and aims to be bigger still with more expansion of its fields. In this regard, Qatar stands to gain market share by displacing some Russian gas imports into Europe. Not being part of OPEC gives Qatar considerably more negotiating room in gas markets, and in that role can somewhat blunt Russian behavior by offering markets an alternative.

Europeans in particular, and the rest of us in general, are being retaught the perils of entrusting their energy security to countries that harbour expansionist ambitions. Responding to Western sanctions over its war, Russia has threatened to curtail the gas supply to Europe, something it has done repeatedly. Gazprom has cut off gas supply to Europe in the past because it has objected to the trade practices of the transit nation, Ukraine. Germany now finds itself in the awkward position of having to boost its defence budget in NATO at the same time as paying eye-watering energy prices to Russia who is using that money to attack a nation that wants to join the EU and NATO.

Starting in 2017, Russia, along with nine other oil producing nations not part of OPEC, began to operate in concert with OPEC (creating OPEC+), putting paid to the theory that Russia’s oil companies are independent of the Kremlin. With Russian production at 11m barrels, OPEC+ is more like 50% of global production, and therefore of considerable influence in global markets. Working with OPEC means Russia back), Russia can more effectively apply pressure on its customers to agree to its policies and actions (such as military intervention in neighboring nations), and agree to not intervene or criticize the behaviour of its partners in exchange for favourable trade terms.

Lately, Russia has started to insist that its gas exports be paid for in roubles. Almost all international energy contracts are based on USD. Normally, if a party to a long term contract unilaterally changes one of the contract conditions without a negotiation, the contract is void.

The explosive growth of new US oil supplies from previously untamed shale has shifted the US, in the short span of just 5 years, from importer dependent on global oil supplies to the world’s largest single oil producer nation and a major oil exporter. US demand for oil has been flat for years, despite annually adding 15m new drivers to its market (that’s testament to the deep shift towards a fuel light service economy, the efficiency of engine technology, and changing consumer behaviour).

This shift in fortunes reduces the ability of oil supplier nations to the US from applying pressure on the US political system. Russian imports were perhaps 500,000 barrels per day.

Robust domestic supply also means that US sanctions do not sting the US domestic economy as much, which is better insulated from the global oil market, but sanctions may mean other economies will feel a pinch.

The US, along with Australia, have emerged as major gas exporters in their own right. Australia has built almost a dozen huge export plants in the past 15 years, and the US pivoted a number of its LNG import plants to export (yes, the US at one time was perilously short of gas too, but solved that problem thanks to fracking and horizontal drilling).

BP’s excellent energy stats highlight the flat demand in the OECD economies in addition to the US. So where is all the growth? China and other growing Asian economies. Supplier nations are all effectively fighting over the very large and attractive Chinese marketplace. Paradoxically, China’s government has made it clear their intent to move away from fossil fuels for energy to clean up their air (and as a side measure, reduce their dependency on US currency markets).

China, as a big oil importer but with a strong industrial policy towards clean energy, will be able to seek favourable trade deals with exporters, in exchange for market access.

On the horizon is the shift to new drivetrain technology for mobility. The list of countries that have banned the sale of internal combustion engine cars beyond 2030 is starting to grow impressively.

A good way, some say, to bring rogue nations to their senses is to impose sanctions on them that deny access to international banking or markets for their products. This cuts off access to hard currency, and with nations like Russia, highly dependent on its energy exports, a ban on Russian oil and gas should hurt.

Digital innovations will increasingly play a role in the geopolitical world of oil and gas, and with unpredictable effects.

Digital tools are proving effective in helping resource owners improve their understanding of their reserves. Cloud computing environments are able to conduct multiple parallel interpretations of subsurface data, speeding up resource planning, to crowd-source interpretation support, and to bundle resource data from several sources. Cloud technology is now a minimum mandatory for any business aiming to participate in the economy of the future.

However, it might not be in the best interests of national oil companies and governments to have their resource data accessible in cloud environments. That data has strategic value in situations where nations are potentially competing for market access or capital.

MONITORING ASSETS ON THE MOVE

Digital technology is enabling far better surveillance of oil assets from afar. Crude oil ships and LNG carriers may all look alike to the untrained human eye, but with enough data to work with, artificial intelligence can learn to distinguish between carriers, whether loaded or unloaded, and based on speed and track, likely destinations. A common tactic to avoid sanctions is to turn off vessel tracking devices. However an artificial intelligence machine consuming the overnight satellite video feed and identifying the ghost ships makes such moves less effective. Sanctions will take on a whole new level of enforcement.

Similarly, the presence of construction equipment, such as cranes, or greatly increasing cars on site, or buses at facilities, detectable by satellite data interpretation, could signal expansion or a turn around, the ideal time to apply trade pressure.

As more and more technology becomes cloud enabled and digital, that technology is more easily transferred or sold over networks without a trace, in violation of trade rules that may prohibit such sale and transfer. Eventually, blockchain solutions that enable tracking of digital assets will make it easier to detect such illegal activity. Other clever mechanisms could include a ‘call home’ feature for all software to secure a constantly changing secret code that unlocks the software.

The digital underworld has many markets for buying and selling hacks, identities, malicious code, Trojan horses and other bits of nefarious technology. This market activity provides another inexpensive toolset to enable geopolitical actors to press their advantage. Imagine a scenario where an oil exporting state actor hacks into its customers’ oil infrastructure. Monitoring customer product volumes can enable advantageous trade strategies. At another extreme, a state actor could disrupt power energy infrastructure and force its customer to purchase more expensive oil, a kind of ransom.

SHIFTING CURRENCY AWAY FROM THE GREENBACK

An intriguing digital innovation would be the adoption of a non-sovereign digital currency or stable coin to serve as the settlement currency for oil and gas. This digital innovation could permanently shift the global reliance on the US dollar and the US banking system away to a neutral market participant. It might neuter the ability of the US government to apply energy trade sanctions to nations.

Crude oil has no DNA, but crude oil cargos often contain unique biological traces that contain DNA. These genetic markers can sometimes precisely identify the exact source and field from where the crude oil was pumped. Coupled with new digital tools that can rapidly process crude assays, and blockchain for recording the assays and originating cargos on a secure registry, oil can suddenly be traced through its lifecycle, much like how Walmart tracks pork in China.

Digital solutions may make it increasingly difficult for oil customers to purchase crude oil from states under sanction by removing the cloud of mystery around oil source.

This is practically impossible with gas, which is typically highly purified before it is shipped via pipeline, or chilled into liquid.

The digital tools to provide full traceability of energy products are well under development. The Department of Homeland Security is running pilots involving Canadian cross border oil movements using blockchain technology. The administrative costs to Canada and the US (audits, penalties, tariff over payments, compliance administration) amounts to more than $1b per year, which could be substantially reduced or eliminated through this innovation.

More importantly, the work is firming up the potential for blockchain tools to trace crude barrels and finished products well beyond the friendly Canada-US border and into international product movements. Another tool in the sanctions toolbelt is at hand.

Internationally, Aramco has invested in Data Gumbo to help unlock the value of blockchain in tracing commodities. Repsol is running BlockLabs by Finboot to track product through the testing and certification process.

The politics of energy may be more visible right now, but will go on forever, so long as there’s a market. However, digital innovations will trigger adjustments in the geopolitical arena.