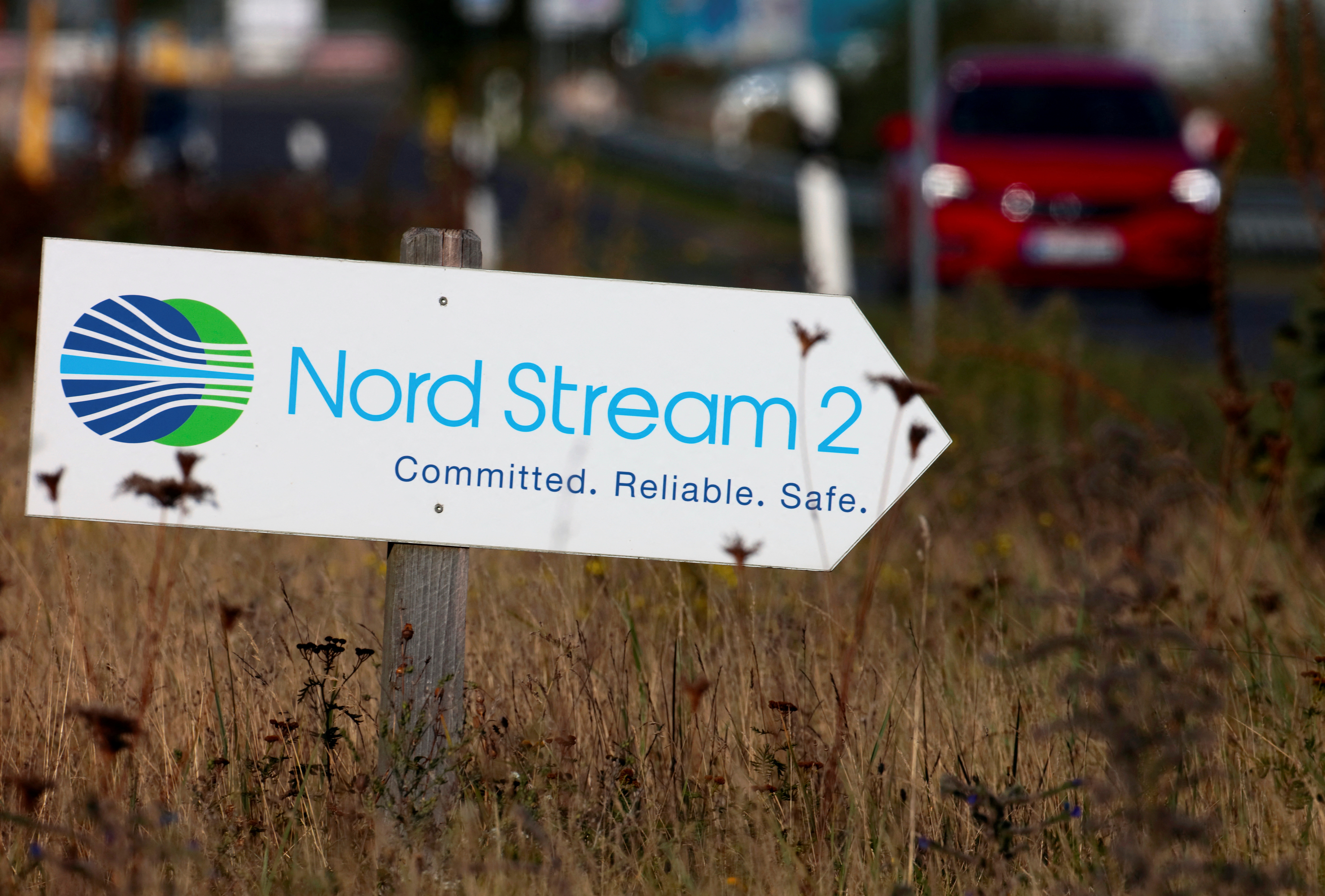 SCHWERIN, Germany, Feb 24 (Reuters) – In the north German state of Mecklenburg-Vorpommern, where former Chancellor Angela Merkel was born, ties to Russia run deep – so deep, in fact, its leaders have defended a Kremlin project that the United States says helped cripple Ukraine.

At issue is a new gas pipeline project, which Germany halted on Tuesday in retaliation for Russia’s decision to recognise two breakaway regions in eastern Ukraine, shortly before it invaded and brought Europe to the brink of a major war.

Mecklenburg-Vorpommern is the landfall site for the line, Nord Stream 2, which bypasses the former Soviet Republic. The United States long argued the line would weaken Ukraine; Germany and Russia insisted the project was purely commercial. Nonetheless, in 2019 Washington set sanctions on some companies and individuals who were helping to build it, maintaining the line is a tool for Russia to support aggression against Ukraine.

Last January, the regional premier, Manuela Schwesig, took action to support the Russian project. At her initiative, the state parliament voted to set up a special foundation whose charter said it could acquire, manage, own, provide or let land, tools and machines to help the completion of the pipeline read more .

“We believe that it is right to build the pipeline,” Schwesig told reporters in January 2021. Advocating for the pipeline in the state parliament last January, Schwesig said the U.S. sanctions were self-interested. “Nobody who is working on building the pipeline is doing anything wrong,” she said. “The ones doing something wrong are those who are trying to stop the pipeline.”

Nord Stream 2 would double the amount of gas Russia can pump directly to Germany, its biggest customer for gas, make Germany and Europe less vulnerable to supply interruptions caused by disputes between Russia and Ukraine, and bring economic benefits to Mecklenburg-Vorpommern, a relatively deprived region that used to be in the German Democratic Republic.

But this year as Russia stepped up pressure on Ukraine, questions mounted around the Foundation, called Klima-und Umweltschutz MV (Climate and Environment Protection Foundation). It would not reveal who was running its sanctions-busting operation beyond saying that the person was appointed by Nord Stream 2 AG, a company owned by Gazprom PAO, which is fully controlled by the Russian state.

The state auditor, the Court of Auditors, told Reuters on Feb. 9 it was concerned that Mecklenburg-Vorpommern had largely given up control over the Foundation’s assets. This meant there was no guarantee that the Foundation would always work in the public interest, said Sebastian Jahn, the court’s spokesman, in a telephone interview.

The Foundation said on Wednesday it would stop helping the pipeline project, but declined to say exactly what it had done to aid it so far. In an account of its first year on its website, it said that to complete the pipeline, “the U.S.’s illegal threats had to be countered with a wide range of measures, which for obvious reasons cannot be made the subject of public explanation.”

Public records show it purchased a ship which entered the Baltic last July and which a U.S. State Department report to Congress last November said had engaged in pipe-laying activities, on Nord Stream 2 or another sanctioned project.

“We did what is necessary, the pipeline is practically completed,” Foundation Chairman Erwin Sellering told German broadcaster NDR on Wednesday, adding that this involved helping small and medium-sized companies do their work. “We can say we fulfilled our mandate,” he added.

As Russia continues to pressure Ukraine, other questions are mounting about the links between the pipeline, Germany’s ruling Social Democrat Party (SPD), and Moscow. The regional premier Schwesig is, like Chancellor Olaf Scholz, a member of the SPD, which traditionally advocates rapprochement with Russia.

So, too, is Gerhard Schroeder, a former Chancellor who has described himself as Putin’s personal friend. One of his last acts in office in 2005 was to sign the deal creating the Nord Stream 2 project. Soon after, he became chairman of the company behind it – the first of several directorial positions he has taken at Russian energy companies.

Now, opposition to his lobbying is becoming increasingly heated across Germany. Schwesig and Schroeder declined to comment for this story.

In 2019, Scholz rejected the U.S. sanctions as interference in Germany’s affairs. On Tuesday, after Russia formally recognised the two breakaway regions, he decided to halt certification of the pipeline.

But some analysts say the damage to Germany is already done.

“Russia has succeeded in using the personal interests of prominent German political figures against Germany,” said Marcel Dirsus, Non-Resident Fellow at the Institute for Security Policy at Kiel University.

“All this is doubly dangerous for Germany: It allows an adversarial foreign power to influence decision-making and it raises questions about Germany’s reliability among the country’s allies.”

The Foundation, housed in a grey townhouse next to a kebab shop, was funded from 200,000 euros ($227,000) given by Mecklenburg-Vorpommern, plus 20 million euros from Nord Stream 2. It said its prime goal was to act against climate change, arguing that even though gas is a fossil fuel, it’s needed as a clean alternative to coal until Germany can manage on renewable energy.

It promised a free tree and 500 euros to every kindergarten in the state, and said its secondary goal was to make sure the Nord Stream 2 pipeline was completed, “regardless of external efforts.” Even though Nord Stream 2 made up the majority of the Foundation’s funding, the Foundation would not reveal any information about its activities to beat U.S. sanctions.

“Transparency is very important to us,” Foundation Chief Executive Christine Klinger said in a telephone interview. But she added in a later email that as a foundation, her group was not obliged to respond to requests under the regional Freedom of Information laws.

In German law, an endowed foundation must spend all it earns from its capital on a public good: Deutsche Umwelthilfe, an environmentalist group, argues the Foundation was in violation of this law. The group brought a legal challenge against the Foundation in March 2021, arguing that it served the interests of the Nord Stream 2, a private business, not the public. That case continues.

Transparency watchdog Transparency International (TI) said the Foundation may have violated anti money-laundering legislation, since its claimed purpose was different from its actual purpose, which was to help Nord Stream 2.

“The mere fact that a foundation that is meant to be devoted to climate and environmental protection is … supporting the efforts of a Russian state company to build a gas pipeline and dodge international sanctions is questionable,” said Transparency International’s finance expert Stephan Ohme. “But the fact that the Foundation obscures who it is actually benefiting is a possible violation of German and European money-laundering laws.”

TI also argued that others with influence over the Foundation, such as Gazprom’s Chief Executive Alexei Miller and the Russian state, should also have been listed on the Foundation’s records in Germany’s national transparency register.

Foundation Chair Sellering dismissed TI’s claims as “total nonsense” in his TV interview, saying it was not true that the Foundation’s financial backers had any influence over its actions and that it was simply not wise to comment step-by-step when “disputing a world power.” He was referring to the United States.

The state government is not responsible for listing names in the transparency register or for policing it, a government spokesperson said, and declined further comment.

At least three senior members of the regional SPD are closely linked to the Foundation: Schwesig, the premier who backed legislation creating it; Sellering, its chairman, a former state premier; and Christian Pegel, a lawyer and former economy minister who introduced the legislation in the regional parliament and whom political colleagues describe as the brains behind it.

Sellering told Reuters earlier this month the Ukraine crisis was being used as an excuse by “significant forces in the United States and Germany who have always opposed the pipeline.” None of the politicians responded to Reuters requests for comment on Wednesday.

As Chancellor Scholz suspended Nord Stream 2, pressure grew on him to take his predecessor Schroeder to task for lobbying for Gazprom.

Politicians from the opposition and junior coalition party the Free Democrats called on the government to strip Schroeder of his privileges as a former chancellor, such as an office with car and staff. Some said he should repay taxpayer money spent in previous years if the spending can in any way be linked to his lobbying activities.

Last week, at a meeting with Scholz in the Kremlin, Putin lavished praise on Schroeder and Scholz distanced himself from the former Chancellor. “He speaks for himself, not the government,” he said.

In Mecklenburg-Vorpommern, support for Nord Stream 2 is broad-based, including the regional CDU – Merkel’s party. Merkel, who has been critical of Putin, did not respond to a request for comment. People in the region have a different relationship to Russia from those in western Germany, said Franz-Robert Liskow, CDU parliamentary leader.

Just over 70% of regional respondents to a January 2021 poll by Forsa for the Ostsee Zeitung newspaper thought the pipeline would be important for Germany’s energy supply. In eastern Germany more broadly, 74% backed the pipeline last year, another poll found. After the U.S. moved to sanction the line, a third poll found 24% of East Germans thought Germany should respond with counter-sanctions.

The region’s ties to Russia are ancient. Even in the Middle Ages the cities of the German Baltic coast were intimately linked with Russia by sea. For many years, the region’s Baltic Sea ports had direct ferry and cargo routes to the Russian ports of St. Petersburg and Kaliningrad.

Its sea port of Mukran, the East German government’s last major infrastructural project, started in 1982, was meant to create a direct trade link to Russia bypassing Poland, then in a state of turmoil following the declaration of a state of emergency.

Deprived of its purpose after the Soviet Union collapsed, Mukran played an important role in construction of a previous pipeline and was used as a place to store materials before they were shipped to lay Nord Stream 2, a spokesperson told Reuters.

For Torsten Koplin, regional head of the hard-left Die Linke party that is the successor to the East German Communist Party, the Russian connection goes beyond economic gains. He argued that local people see the trade Nord Stream 2 represents as an opportunity to preserve peace.

On the street near the Foundation, office worker Roland Bentler echoed that view. He wondered aloud if freezing the pipeline “really was the most urgent decision” that Germany’s government needed to take in the Ukraine crisis.

“Positions will harden,” he said, “but I hope that reason will win out in the end and that gas will flow, not blood.”