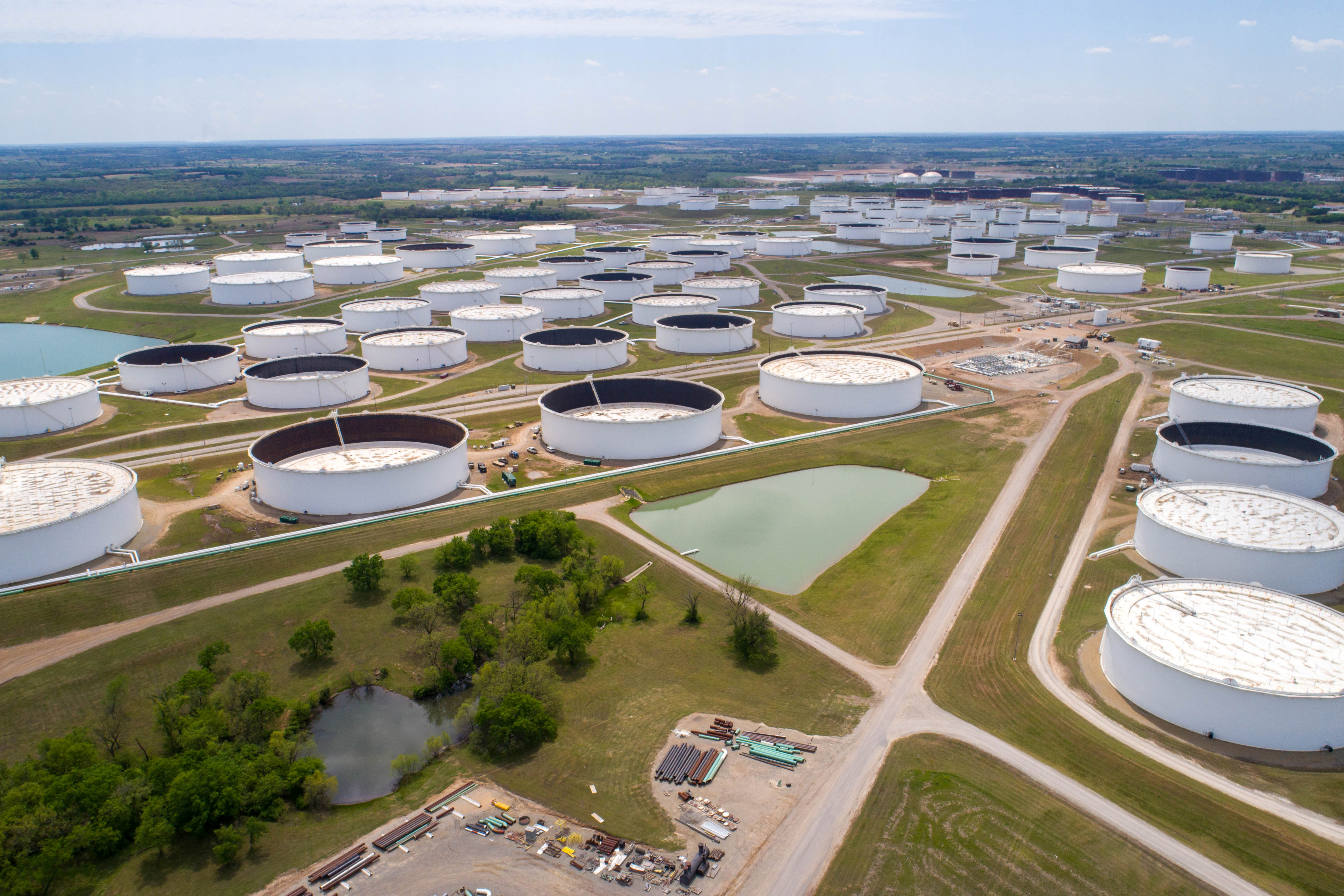 Crude oil storage tanks are seen in an aerial photograph at the Cushing oil hub in Cushing, Oklahoma, U.S. April 21, 2020. REUTERS/Drone Base

NEW YORK, Oct 27 (Reuters) – Crude oil tanks at the Cushing, Oklahoma storage hub are more depleted than they have been in the last three years, and prices of further dated oil contracts suggest they will stay lower for months.

U.S. demand for crude among refiners making gasoline and diesel has surged as the economy has recovered from the worst of the pandemic. Demand across the globe means other countries have looked to the United States for crude barrels, also boosting draws out of Cushing.

Analysts expect the draw on inventories to continue in the short-term, which could further boost U.S. crude prices that have already climbed by about 25% in the last two months. The discount on U.S. crude futures to the international Brent benchmark should stay narrow.

“Storage at Cushing alone has the potential to really rally the market to the moon,” said Bob Yawger, director of energy futures at Mizuho.

Cushing stockpiles have dropped to 31.2 million barrels, the lowest since October 2018, the Energy Information Administration said last week, or about half of where inventories were at this time a year ago.

Inventories have fallen because of a ramp-up in U.S. demand, which has encouraged domestic refiners to keep crude at home to provide fuel such as gasoline and distillates to U.S. consumers, said Reid I’Anson, senior commodity analyst at Kpler.

In addition, U.S. production has been slow to recover from declines seen in 2020. At the end of 2019, the nation was producing roughly 13 million barrels of oil per day (bpd), but in recent weeks has been less than 11.5 million bpd. At the same time, product supplied by refineries – a proxy for demand – is about just 1% below pre-pandemic peaks.

In an additional sign of high short-term demand for U.S. crude, the premium for U.S. crude delivered this December versus December 2022 reached a high this week of $12.48 per barrel, most since at least 2014, according to Refinitiv Eikon data.

“Only if OPEC (the Organization of the Petroleum Exporting Countries) intervenes with more supply of crude or if COVID rears its ugly head again, curbing demand, this high volatility will come off,” said Mukesh Sahdev, senior vice president and head of downstream at Rystad Energy.