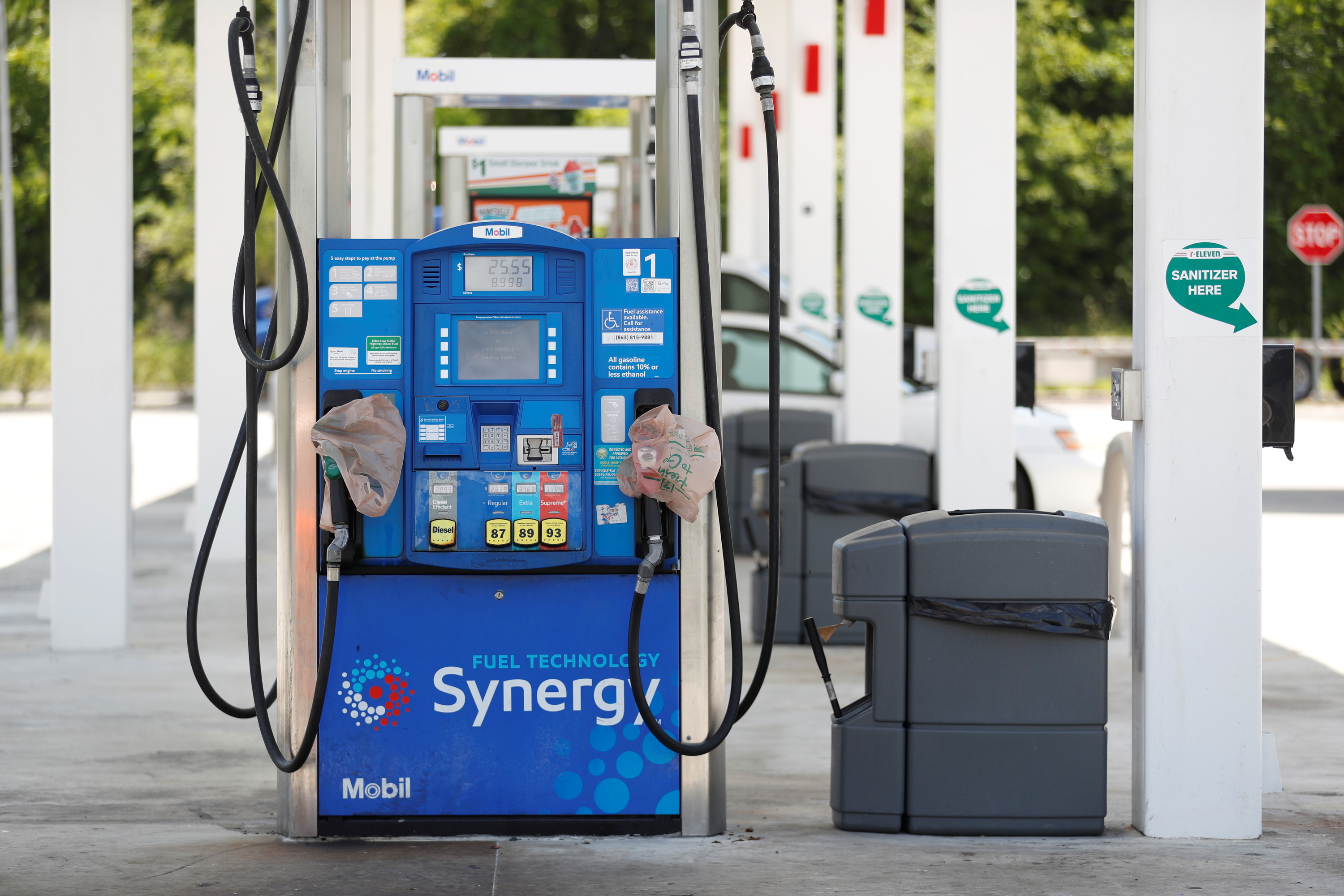 A plastic bag covering a fuel pump to signal no gas is available is seen at a gas station after a cyberattack crippled the biggest fuel pipeline in the country, run by Colonial Pipeline, in Lakeland, Florida, U.S. May 14, 2021. REUTERS/Octavio Jones

Widespread gasoline shortages along the U.S. East Coast began to ease slightly on Saturday as the nation’s biggest fuel pipeline ramped up operations following last week’s cyberattack, and ships and trucks were deployed to fill up dry storage tanks.

The six-day Colonial Pipeline shutdown was the most disruptive cyberattack on record, triggering widespread panic buying by U.S. motorists that left filling stations across the U.S. Southeast out of gas. read more

More than 13,400 gas stations surveyed in the east and south by fuel tracking app GasBuddy were experiencing outages on Saturday, down from 16,200 early on Friday.

On Saturday morning, some 81% of gas stations in Washington, D.C. were still without fuel, an improvement from 88% without fuel late Friday, according to GasBuddy. Shortages also eased slightly in Florida and Maryland, while remaining about the same in North Carolina.

U.S. gasoline demand, meanwhile, dropped 12.6% from the previous week, a decline that was likely due to an easing of “crazed” panic buying just after the pipeline shut, said Patrick De Haan, head of petroleum analysis at GasBuddy.

The nationwide average for a gallon of regular unleaded was $3.04 on Saturday, from $2.96 a week ago, according to AAA.

The pipeline accelerated increases in gasoline prices that were “already rising due to higher crude prices and demand ahead of Memorial Day,” said Ellen Edmonds, spokeswoman for AAA.

Places served by the pipeline saw the biggest price jumps this week – 9 cents in D.C. and 21 cents in North Carolina – but they should also see prices decline again as supplies improve, Edmonds said.

The Colonial Pipeline began its restart on Wednesday, and said it was approaching normal rates.

Ships deployed under emergency waivers were also moving fuel from U.S. Gulf Coast refiners to the northeast, while 18-wheel tanker trunks were ferrying gasoline from Alabama to Virginia, helping to stem the shortages.

U.S. crude prices could edge higher as refiners process more oil to catch up from gasoline storage that was drawn down while the pipeline was shuttered, said Robert Yawger, analyst at Mizuho Securities. The approach of Memorial Day helps make “the sense of urgency supersized” for refiners, Yawger said.

In Washington, D.C., Dennis Li was stuck on Friday at a Sunoco gas station that was out of fuel. He had tried to find gas at four stations during the day, with no luck.

“I’m running on empty to the point where I don’t want to drive anymore,” said Li, who is from Annapolis, Maryland.

The hacking group blamed for the attack, DarkSide, said it had hacked four other companies including a Toshiba subsidiary in Germany. read more

Colonial Pipeline has not determined how the initial breach occurred, a spokeswoman said this week. The 5,500-mile (8,900-km) pipeline carries 100 million gallons of gasoline, diesel and jet fuel per day from Texas refineries to East Coast markets.

Colonial has not disclosed how much money the hackers were seeking or whether it paid. Bloomberg News and the New York Times reported that it paid nearly $5 million to hackers. read more

Steve Boyd, a senior managing director at fuel delivery firm Sun Coast Resources, estimated that with gasoline moving on the pipeline at half Colonial’s normal speed, it could take 12 to 20 days for new deliveries to reach the northern-most point in Linden, New Jersey.

Sun Coast has 75 trucks taking supplies from terminals in Alabama and Georgia to retailers as far away as Virginia.

“If customers need us for another week or three weeks, we’ll be there,” said Boyd.