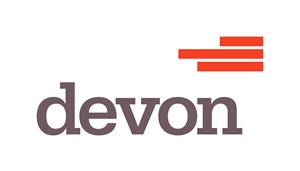 OKLAHOMA CITY, May 17, 2021 (GLOBE NEWSWIRE) — Devon Energy Corp. (NYSE: DVN) is celebrating its ‘golden’ anniversary this month after 50 years of success in the oil and gas industry. Founded by John and Larry Nichols in 1971, the company started with no assets and five employees, but by 1988, was publicly traded and then listed on the New York Stock Exchange. Devon continued to grow organically and by acquisition over the years and stepped into its place on the S&P 500 in 2000. Today it is a leading producer of oil and gas in the U.S.

For half a century Devon has prospered and endured through volatile market cycles, delivering strong performance while adapting and continuing to innovate. Devon’s historic achievements and milestone events include being the first to successfully combine horizontal drilling with hydraulic fracturing in the Barnett Shale of North Texas, which launched the Shale Revolution that spread to oil and gas-producing regions across the U.S.

“When we started, the vision was to build a U.S. oil and gas powerhouse,” said Devon’s co-founder Larry Nichols. “We were always looking for new technologies and modern ways to produce oil and gas because we wanted to be innovators. I’m proud to say that I think that’s exactly what Devon has been in the industry over the years.”

In addition to its many industry achievements and commitment to responsible energy development over the last five decades, Devon has been a major contributor and community partner in all its areas of operations.

STEM education and social service organizations take center stage in Devon’s focus on communities. Over the years the company has partnered with organizations like the Cal Ripken, Sr. Foundation to install STEM centers in local schools; the United Way and local food banks in its annual Give for Good campaign; and emergency responders personnel.

“Devon has always prioritized being a good neighbor and tried to go above and beyond for the communities that allow us to do business,” said Nichols. “They support us, and we support them.”

In January 2021 Devon and WPX Energy merged as equals, keeping Devon’s name and headquarters in Oklahoma City. WPX’s Rick Muncrief became President and CEO of Devon, and Devon’s Dave Hager became Executive Chairman of the Company’s board of directors.

Muncrief comes in at a time of great transition in global energy bringing with him a vision of transforming the company so it will thrive for the next half century.

“Looking back at Devon’s last 50 years gives us a lot to be proud of,” said Muncrief. “I’m excited and humbled to lead the company into its next stage, and am confident that Devon’s culture of integrity, focus on forging strong relationships and acting courageously will continue yielding strong results for all of our stakeholders.

“Devon is a great company, and we intend to build on our past successes to carry on its legacy into the future.”

Devon Energy is a leading oil and gas producer in the U.S. with a premier multi-basin portfolio headlined by a world-class acreage position in the Delaware Basin. Devon’s disciplined cash-return business model is designed to achieve strong returns, generate free cash flow and return capital to shareholders, while focusing on safe and sustainable operations. For more information, please visit www.devonenergy.com.