OPEC+ is right to be cautious about increasing oil production. 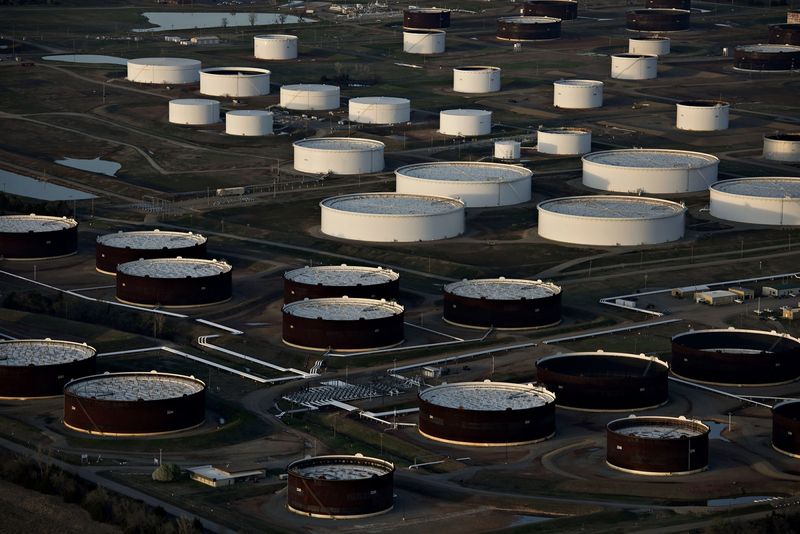 The OPEC+ group of oil producers, led by Saudi Arabia and Russia, may have got inventory levels back up to where they want them, but that doesn’t mean they can take their feet off the brakes on production just yet.

At their last meeting, inauspiciously held on April Fool’s Day, the group set out a path to restore some of their shut-down production over the next three months. The easing, but not yet the ending, of output curbs reflects a more optimistic view of demand for oil as the northern hemisphere moves into its summer months.

The output increases are relatively modest — 350,000 barrels a day in May, the same in June and another 440,000 barrels in July. On top of that, Saudi Arabia will gradually restore the additional 1 million barrels a day that it cut unilaterally in February.

But by the end of July, although the producers will have added almost 2.3 million barrels a day to supply since March, they will still only be pumping what they’d originally planned for January. And they will still be withholding almost 60% of the production they cut a year ago

The strength of oil prices owes a lot to the group’s discipline and its willingness to delay the easing of output cuts, even as it neared its self-set target of reducing commercial oil stockpiles in OECD countries to their average 2014-2019 level.

According to the latest monthly forecast from the U.S. Energy Information Administration, that target has already been reached. But don’t expect that to mean a sudden flood of oil from Saudi Arabia, Russia and their allies. Their approach will, rightly, remain cautious. 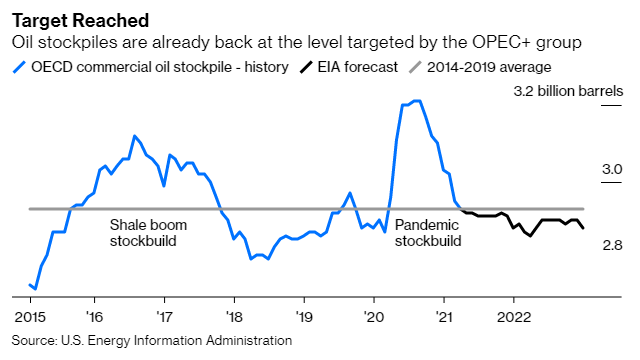 The group concentrated on stock levels in the OECD because, as I’ve written before, they are the most visible. The U.S. provides detailed numbers on a weekly basis, and most of the other members report inventory levels monthly. That’s in stark contrast to countries like China, where inventory is regarded as a state secret and not reported at all.

That’s not to say we have no idea as to what’s happening to oil stockpiles elsewhere. Analyzing satellite data and tracking the movement of oil tankers can be used to build up pictures of how stockpiles are changing in many parts of the world.

One key place that is watched closely by oil traders is Saldanha Bay, just north of Cape Town in South Africa. Underground tanks there can hold as much as 55 million barrels of crude, and the geographical location keeps options open for sending oil to markets in either the Atlantic or Pacific. 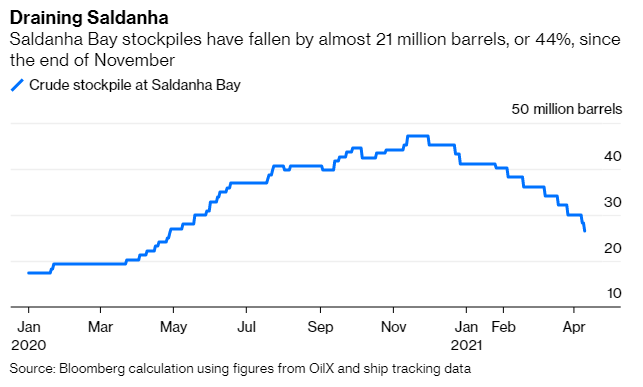 The tanks at Saldanha Bay filled rapidly last year, as the pandemic slashed demand and time-spreads (the difference between future and prompt oil prices) made it profitable to store crude for delivery at a later date. That’s now changed and oil is being taken out of the tanks as quickly as it was put in last year.

China accounted for about 60% of global crude stock builds last year, adding 367 million barrels to its inventory over the course of 2020, according to International Energy Agency calculations. Some of that oil went into strategic, government-controlled stockpiles — the Chinese equivalent of the U.S. Strategic Petroleum Reserve — and is unlikely to reappear unless there’s a supply crisis. 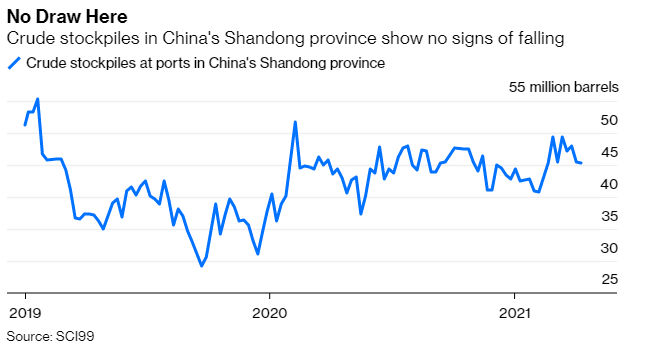 But China’s commercial stockpiles rose, too. The volume of crude stored at ports in the Shandong province, home to most of the country’s independent refiners, soared from about 30 million barrels in December 2019 to more than 50 million barrels by early February 2020, before stabilizing at about 45 million barrels. It is still close to that level now, buoyed in part by new refineries.

Saudi Arabia remains confident that the producer group took the right decision at the start of the month, even as Covid-19 is again spreading rapidly in many parts of the world. Cases hit a new record in India, and Japan is set to reimpose lockdowns in Tokyo, Kyoto and Okinawa.

Although the rapid rollout of vaccines is showing signs of boosting oil demand in places like the U.S. and U.K., traders continue to await a recovery in consumption elsewhere. The producers are right to remain cautious.

This column does not necessarily reflect the opinion of the editorial board or Bloomberg LP and its owners.

To contact the author of this story:
Julian Lee at [email protected]