CALGARY, Alberta (Reuters) – Canadian natural gas producers are bouncing back faster from the COVID-19 pandemic than battered U.S. shale firms, putting them in position to boost net gas exports to the United States for the first time in five years.

The opportunity for Canadian firms to take a piece of the market back from U.S. rivals reverses one of the dominant energy trends of the last decade, where U.S. shale drillers unleashed a flood of cheap plentiful gas – largely a byproduct of crude oil drilling – and pushed western Canadian producers out of their only export market.

Canadian drilling is picking up swiftly, spurred by better pipeline access and because U.S. producers have cut back crude output, and with it, the associated gas produced with that oil. Canada’s production is forecast to keep rising as coal-fired plants are retired and with the expected start-up of its first liquefied natural gas plant.

Oil and gas producers across North America endured a brutal 2020 as the pandemic crushed demand. The fall in Canada was furious, as companies cut gas rigs from 92 at the beginning of 2020 to just nine by June.

Now, Canadian gas companies are putting rigs back to work and have plans this year to increase capital spending for the first time since 2014.

Canada’s rig count has surged from nine to 76, while the U.S. gas rig count is at 90, up from a low of 68 in July, according to Baker Hughes data.

“What we believe is driving some of the increase in expected capital spending for 2021 is for Canadian natural gas producers to capture market share from the reduction in associated natural gas due to the slowdown of drilling and production in a number of the large U.S. shale basins,” said Tim McMillan, chief executive of the Canadian Association of Petroleum Producers (CAPP).

Net Canadian gas exports jumped by 31% year-on-year to 6.3 billion cubic feet per day (bcfd) in January, the most in a month since March 2018, according to data provider Refinitiv.

After plunging to a 30-year low in 2020, exports to the United States could rise as much as 29% to average 5.8 bcfd this year, Goldman Sachs estimates. That would be the first increase since 2016.

Canadian gas exports to the United States have been declining since 2002, particularly since last decade’s U.S. shale boom unlocked a plethora of cheap gas, robbing Canadian shippers of market share in the U.S. Midwest and eastern Canada.

(Graphic: Canada natural gas exports to U.S. due to jump, ) 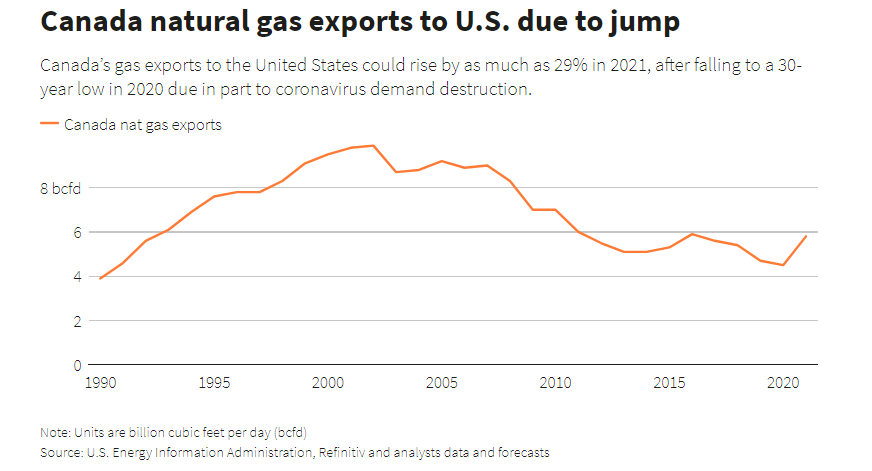 Canada’s gas output is expected to rise by 0.5 bcfd this year to around 15.9 bcfd, according to S&P Global Platts Analytics. The nation’s output peaked at a record of 17.5 bcfd in 2001, according to government data.

Canadian oil and gas producers are forecast to boost spending by 14%, according to CAPP, with most of that increase coming from gas-focused companies.

“We have a larger capital program this year and that’s on the back of a natural gas price recovery,” said Darren Gee, chief executive of Peyto Exploration & Development Corp, which is increasing capital spending to C$350 million in 2021 from C$240 million last year.

“(It) will focus on high-return opportunities in a relatively robust natural gas price environment,” chief executive Alex Pourbaix told analysts on a budget call in January.

Canadian Natural Resources Ltd, the country’s biggest oil and gas producer, has said it hopes to grow natural gas output by 11% this year.

In comparison, shale producers south of the border are expected to cut budgets for a third year in a row in 2021, causing U.S. output to fall for a second straight year.

Among those cutting spending in 2021 are Cabot Oil and Gas Corp and CNX Resources Corp, two of the larger natural gas operators.

On top of falling U.S. supply, Canadian producers are looking to capitalize on increased demand as U.S. consumption and exports are forecast to hit record highs this year.

U.S. gas use, which includes a projected 19% increase in liquefied natural gas (LNG) and pipeline exports, is expected to increase by roughly 1% in 2021.

The imbalance is driving prices higher. Henry Hub futures, a proxy for price expectations, are at roughly $3 per million British thermal units (mm/BTU), representing a near-50% increase from 2020’s average of $2.03, which was a 25-year-low. 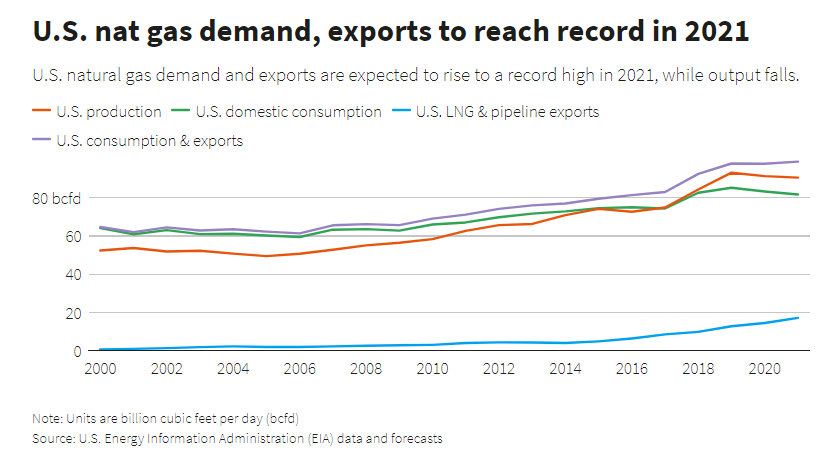 To be sure, the recovery in Canada is in its early stages.

Recent mergers-and-acquisitions in shale, particularly among those who produce in Canada’s premier Montney play in British Columbia, could also hold down spending.

On Wednesday ARC Resources Ltd said it will buy Seven Generations Energy in a deal that will create the biggest Montney producer.

ARC Chief Executive Terry Anderson said the combined company’s immediate focus would be paying down debt but next year it will be looking at expanding production.

Longer-term, Canadian gas firms are expected to benefit from the phase-out of Canadian coal-fired power stations and the country’s first LNG export terminal, expected to be completed in British Columbia by mid-decade.

Wood Mackenzie said it sees this year as the start of another era of gas growth, and forecast Canadian gas exports will rise to around 9 bcfd by 2030.

Mexico Blames U.S. as Energy Crisis Spills Across the Border