Harvest Oil & Gas Announces Liquidating Distribution of $10.00 Per Share and Other Developments

CALGARY/NEW YORK (Reuters) – The Keystone XL pipeline project may be dead, but the United States is still poised to pull in record imports of Canadian oil in coming years through other pipelines that are in the midst of expanding.

U.S. President Joe Biden canceled Keystone XL’s permit on his first day in office Wednesday, dealing a death blow to a long-gestating project that would have carried 830,000 barrels per day of heavy oil sands crude from Alberta to Nebraska.

Environmental activists and indigenous communities hailed the move, but traders and analysts said U.S.-Canada pipelines will have more than enough capacity to handle increasing volumes of crude out of Canada, the primary foreign supplier of oil to the United States.

Currently, Canada exports about 3.8 million bpd to the United States, according to U.S. Energy Department data. Analysts expect that to rise to between 4.2 million and 4.4 million bpd over the next few years. Pipeline expansions currently in progress will add more than 950,000 bpd of export capacity for Canadian producers before 2025, according to Rystad Energy.

Canada’s Energy Regulator says there is enough capacity currently to export more than 4 million bpd to the United States.

Biden’s administration has set a goal of moving towards decarbonization and reducing the country’s reliance on oil and gas and cutting harmful air pollutants. Most of the nation’s energy still comes from fossil fuels.

“Whatever limited benefit that Keystone was projected to provide now has to be obviously reconsidered with the economy of today,” said Gina McCarthy, Biden’s leading domestic climate policy coordinator at the White House.

Even without Keystone, however, the United States now relies on Canada for more than half of its imported oil. Several of the lines carrying that crude are in the midst of expansions.

For a graphic on U.S. imports of Canadian oil surge: 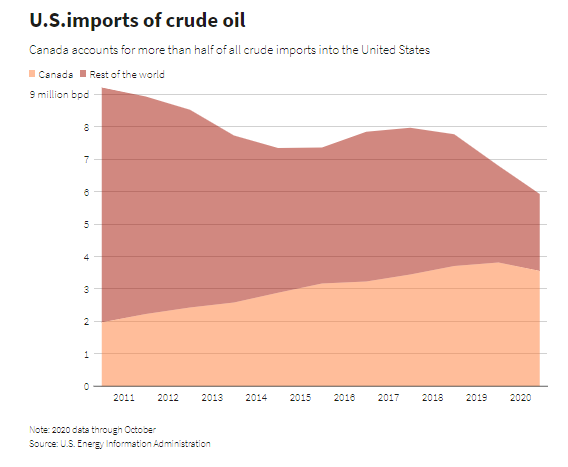 Enbridge Inc’s Line 3 replacement project is in the process of doubling its capacity, which will allow it to deliver about 760,000 bpd of crude from Alberta to Superior, Wisconsin, by the end of this year.

Canada’s government is also expanding the state-owned Trans Mountain line by 590,000 bpd to 890,000 bpd. That line terminates at the Port of Vancouver, where it should be able to deliver barrels via tankers to the United States.

“We will be over-piped assuming the other pipelines go ahead on schedule,” said Wood Mackenzie research director Mark Oberstoetter. “If you add them all up, you can make the argument KXL was not needed.”

Construction underway on Trans Mountain and Line 3 could still be held up by environmental protests, but unlike Keystone XL, both pipelines have cleared legal and regulatory hurdles.

Oil production in western Canada will rise in 2021 to a new record of 4.45 million bpd, RBN Energy estimates, up from 3.9 million bpd in 2020, most of which will be exported to the United States.

Canada is the world’s fourth-biggest crude producer, but has been grappling for years with congestion on pipelines. That caused a glut of oil in storage tanks in Alberta, driving prices down, and spurring the province to impose production curtailments to drain record inventories.

Those curtailments were lifted in November, and production has been rising ever since. Even as production is rising again, pipeline companies have boosted efficiency on existing pipelines through the use of drag-reducing agents.

“While the politics around KXL will continue to reverberate for some time, the reality is that western Canada – for the first time in recent memory – may soon reach a juncture at which it has excess oil export capacity,” Rystad Energy’s vice president for North American shale Thomas Liles said in a note.