LONDON (Reuters) – Oil jumped by almost 10% on Monday for its biggest daily gain in more than six months after Pfizer announced promising results for its COVID-19 vaccine candidate and Saudi Arabia said an OPEC+ oil output deal could be adjusted to balance the market.

Both contracts rose more than $4 earlier in the session.

Pfizer said its experimental vaccine was more than 90% effective in preventing COVID-19, based on initial data from a large study.

“In the eyes of traders, a vaccine will help ensure no future lockdowns are needed and will bring people back to the streets, allowing road and air transport to recover,” said Rystad Energy’s head of oil markets Bjornar Tonhaugen.

Saudi Arabia’s Energy Minister Prince Abdulaziz bin Salman said the OPEC+ deal on oil output cuts could be adjusted if there was consensus among members of the group.

The Saudi minister was commenting after being asked whether OPEC+ – which groups OPEC states, Russia and other producers – would stick to existing cuts of 7.7 million barrels per day (bpd) rather than easing them to 5.7 million bpd from January. 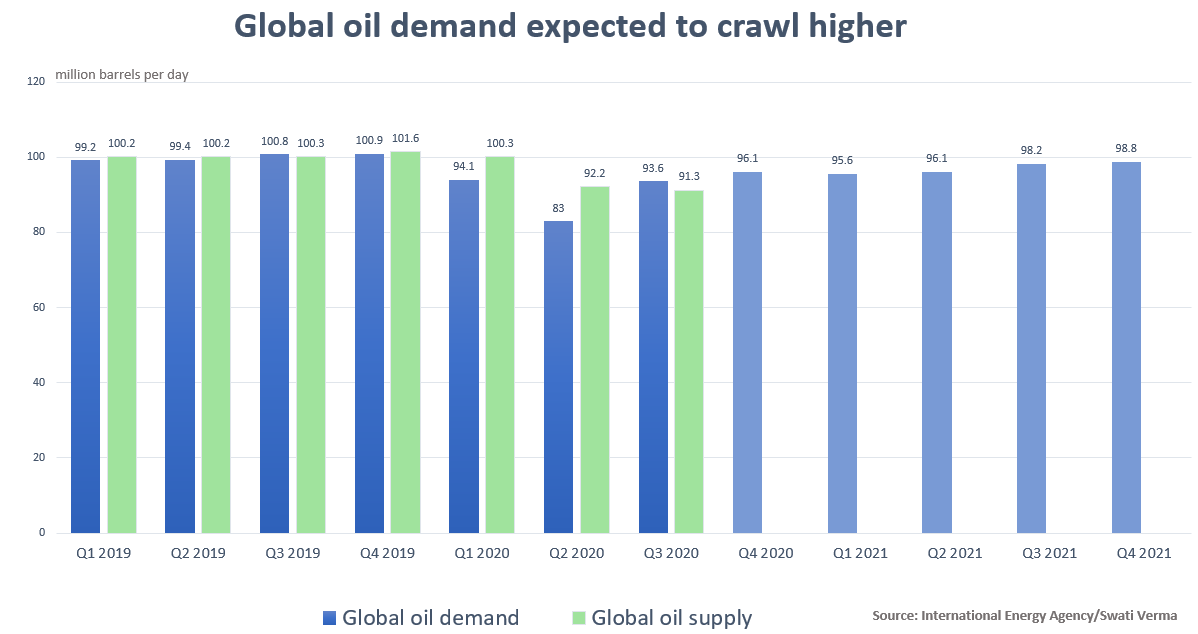 Key members of the Organization of the Petroleum Exporting Countries (OPEC) are wary of U.S. President-elect Joe Biden relaxing measures on Iran and Venezuela, which could mean an increase in oil production that would make it harder to balance supply with demand.

“While a Biden presidency increases the likelihood of Iranian oil supply returning to the market, this is not something that will happen overnight, and we still believe it’s more likely an end of 2021/2022 event,” ING said in a note.

The dollar weakened on Monday, hitting a 10-week low and boosting dollar-priced commodities that become more affordable for buyers outside the United States. [MKTS/GLOB]

“Major parts of the European continent are in lockdown. This would surely work toward the negative side,” said Keisuke Sadamori, IEA director for energy markets and security.

Shale Driller WPX Rejected 43% Takeover Premium for One at 2.6%

Oil inventories to edge up, impact from Biden policies to take time – Mercuria