But in an interview with Reuters, Ben van Beurden expressed concern that some shareholders could abandon the world’s second-largest listed energy company due partly to what he called the “demonisation” of oil and gas and “unjustified” worries that its business model was unsustainable.

The 61-year-old Dutch executive in recent years became one of the sector’s most prominent voices advocating action over global warming in the wake of the 2015 Paris climate agreement.

Shell, which supplies around 3% of the world’s energy, set out in 2017 a plan to halve the intensity of its greenhouse emissions by the middle of the century, based in large part on building one of the world’s biggest power businesses.

Still, the amount of carbon dioxide emitted from Shell’s operations and the products it sells rose by 2.5% between 2017 and 2018.

“Despite what a lot of activists say, it is entirely legitimate to invest in oil and gas because the world demands it,” van Beurden said.

“We have no choice” but to invest in long-life projects, he added.

Shell and its peers have long insisted that switching away from oil and gas to cleaner sources of energy will take decades as demand for transport and plastics continues to grow. Investors have warned, however, that oil companies often rely on forecasts that underestimate the pace of change.

Shell plans to greenlight more than 35 new oil and gas projects by 2025, according to an investor presentation from June.

Oil and gas remain the backbone of profits for Shell, the largest listed company on London’s main FTSE index .FTSE.

While oil and gas account for the entirety of Shell’s free cashflow today, it foresees a gradual diversification over the next two decades. Oil and gas are each still expected to provide a third of free cashflow, however, with the rest coming from power and chemicals.

Many oil and gas projects such as gas-processing plants, deepwater platforms or chemical plants take billions of dollars to develop and operate for decades.

Shell, like many rivals, has become more selective in its investments as the outlook for oil prices and demand remains unclear. It targets new projects that can be profitable at oil prices of $20 to $30 a barrel and which emit relatively low greenhouse emissions. Oil is trading at around $60 a barrel.

“Fortunately enough, we have more of those than we have money to spend on them.”

Van Beurden rejected as a “red herring” arguments that Shell’s oil and gas reserves, which can sustain its current production for around eight years, would be economically unviable, or stranded, in the future.

A lack of investment in oil and gas projects could lead to a supply shortage and result in price spikes, he said.

“One of the bigger risks is not so much that we will become dinosaurs because we are still investing in oil and gas when there is no need for it anymore. A bigger risk is prematurely turning your back on oil and gas.”

Shell plans to increase its annual spending to around $32 billion by 2025 from the current $25 billion, with up to one tenth allocated to renewables and the power business.

The company, the world’s largest dividend payer, plans to return $125 billion to shareholders in the five years to 2025.

On liquefied natural gas, of which Shell is the world’s biggest trader, van Beurden said the market would exhibit oversupply in the near term. “But (LNG) demand will continue to grow at a pace that is roughly four times that of oil,” he said. 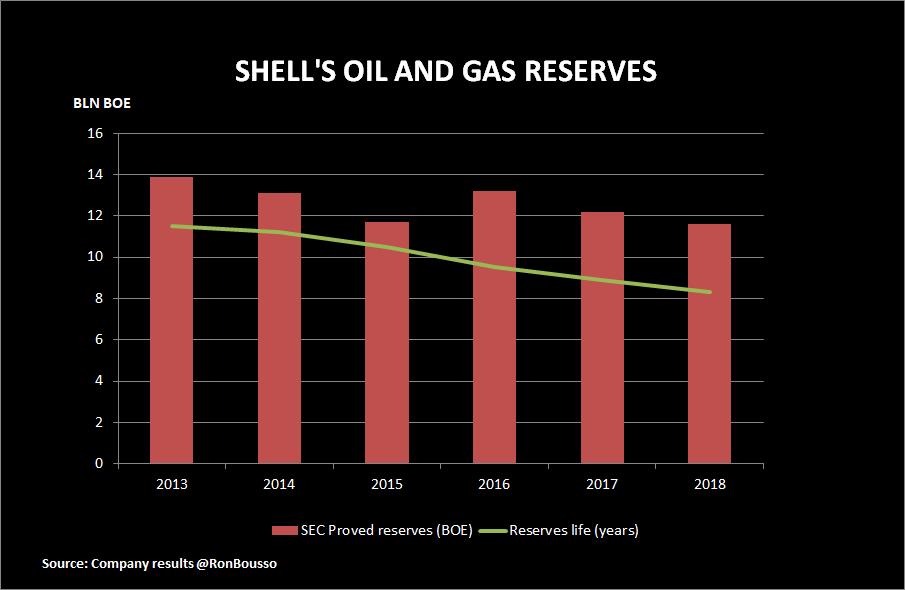 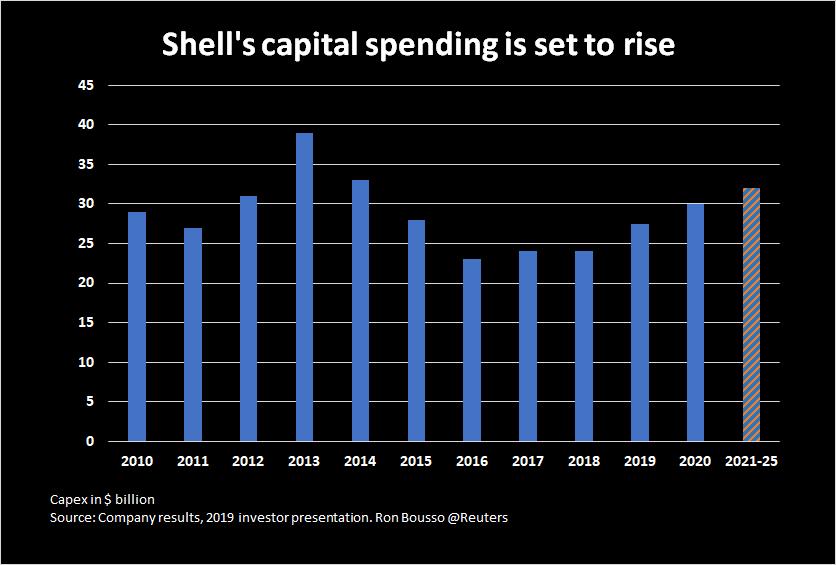 Shell has become a focal point of environmental protests, particularly in Europe, with regular demonstrations outside its London headquarters and the British National Theatre dropping Shell’s sponsorship in recent months.

At the same time, investors have sharply increased their scrutiny of companies’ environmental performance.

Amid growing uncertainty over future demand, the share prices of Shell and its peers have underperformed relative to other sectors.

Van Beurden expressed concern that some investors could ditch Shell, acknowledging that shares in the company were trading at a discount partly due to “societal risk”.

“But I don’t think they will flee for the justified concern of stranded assets … (It is) the continued pressure on our sector, in some cases to the point of demonisation, that scares asset managers.”

“It is not at a scale that the alarm bells are ringing, but it is an unhealthy trend.”

Van Beurden put the onus for achieving a transformation to low-carbon economies on governments, warning that not enough progress had been made to reach the Paris climate goal of limiting global warming to “well below” 2 degrees Celsius above pre-industrial levels by the end of the century.

“Can that happen? I think it can … Increasingly society is not putting up with the fact we are not making enough progress.”

Delaying implementation of the right climate policies could result in “knee-jerk” political responses that might be very disruptive to society, he said. 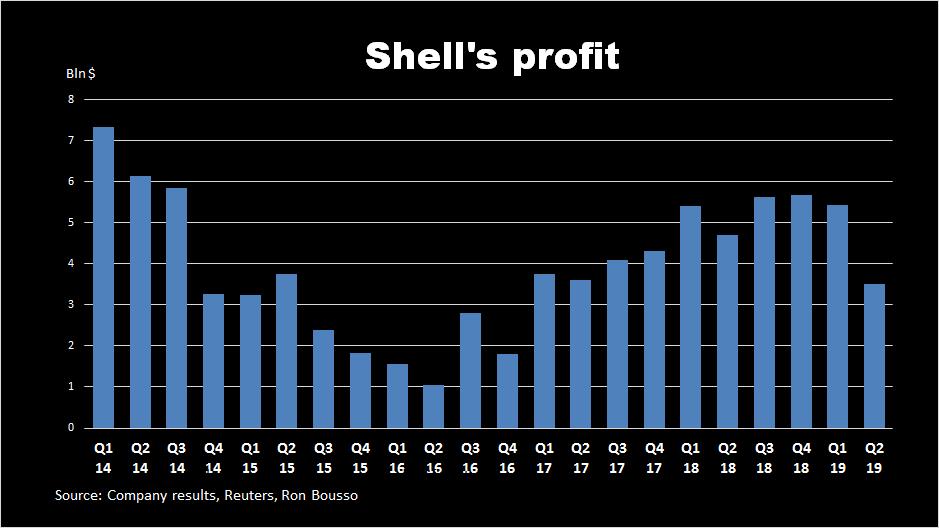 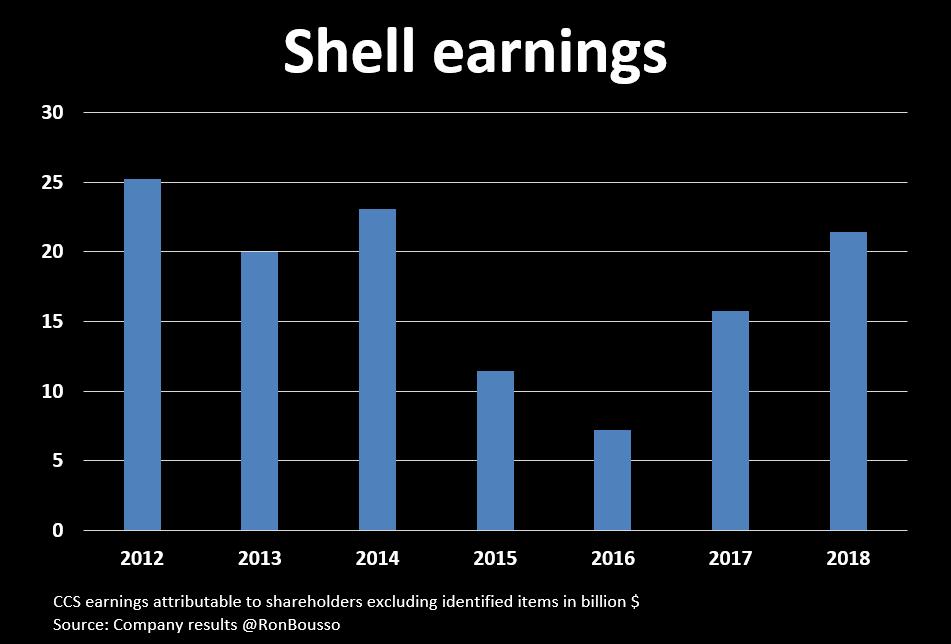