With more accurate computer modeling for drill sites connected to long lead times (6-12 months) for procurement of large equipment like gas compressors, long-term planning is both possible and necessary. That plus the emergence of gas lift compression as a preferred artificial lift solution has made compression services companies like CSI Compressco LP (“CSI Compressco”) a key part of the oil economy.

“They have much better drilling predictability now in the Permian Basin,” said CSI Compressco’s Vice President of North American Sales Levent Caglar, “so they’re in a position where they can do better infrastructure planning.” He noted that companies are in manufacturing mode with centralized drill pads, as well as field gathering and midstream stations.

“Despite the volatility for oil and gas prices in late 2018 that affected demand for many other oilfield services, we haven’t seen a slowdown in demand for compression services,” he said. 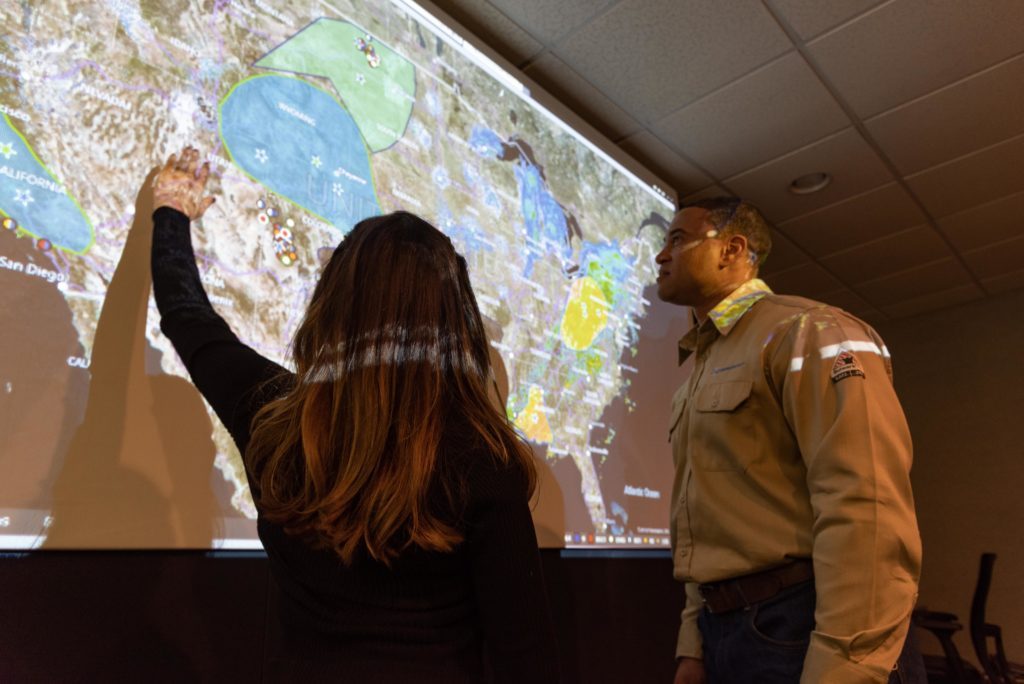 Once a well’s production is given to gas lift, the compression equipment involved will remain in place as long as gas lift is the appropriate method for that well. Caglar calls gas lift’s popularity a “game-changer for us” because it boosted demand for larger compressor packages.

Gas lift utilized in centralized production pads began to get more traction in recent years, and has gained popularity and market share as a lift choice for new shale field development versus electric submersible pumps (ESPs). Larger compression equipment horsepower needs, as a result of the increased oil and gas production, would mean greater customer capex under the old business model, wherein producers buy and maintain their own collection of compressors. Caglar says CSI Compressco sells a good number of gas compressor packages. However, the recent trend has shifted toward contract compression services, which is definitely growing in popularity.

“We are focused on being a compression solutions provider for our customers,” he said. “In this new world, our compression equipment is becoming part of the oil and gas production infrastructure.” As the production volumes increase at the new sites, so does the average size of a compression unit.

In addition to costs, the other driving force is total reliability and maximizing production levels. As the compression services company itself handles repairs, maintenance, and operations of the equipment instead of that being the customer’s bailiwick, run times have pushed past 98 percent overall. The new paradigm, however, has expanded how the compression services company evaluates reliability. 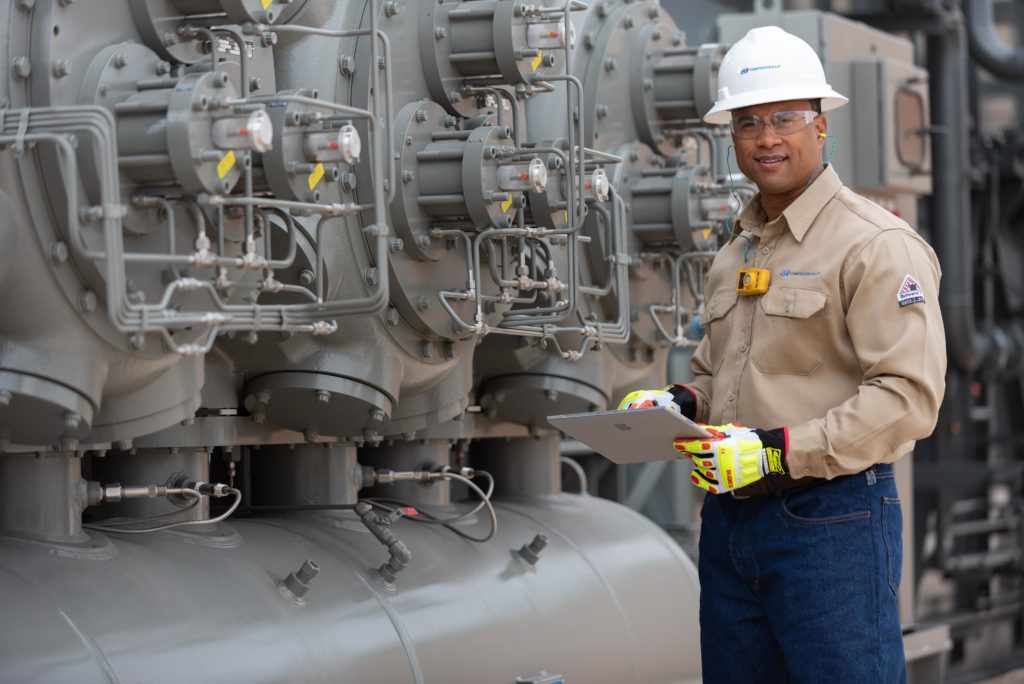 “We’re not just focused on compressor run time,” he said. “We’re also looking at everything else around our compressor where we can help the customer increase production.”

Throughout a number of basins where they operate—Caglar cited the Permian, Eagle Ford, SCOOP/STACK, Niobrara, and Bakken—CSI Compressco can improve efficiencies of scale by handling installation, maintenance, and operation of the equipment themselves, allowing the customer to focus on production.

As with every industry, remote monitoring and data diagnostics are also improving reliability, Caglar said. Most of their units are remotely monitored, with more being added almost daily. This not only allows for remote control in case of a problem, it gives CSI Compressco engineers information regarding any individual parts or systems that can be improved. Big Data, as it’s called, also helps with predictive maintenance that can reduce failures.

A team of engineers monitors incoming data for exceptions—and “if they see something getting out of parameters, they notify the field operations people to address those things they’re seeing,” Caglar explained.

Many of CSI Compressco’s customers are upstream companies, but they also have a significant footprint in midstream, including regional gathering systems, midstream processing plants, and other applications. “There’s a lot more associated gas coming out of the ground, and all of that gas has to be compressed” and sent somewhere.

Seeing that the United States is moving to the top of the list for oil production and for LNG export, Caglar is excited about the future for the compression market. “That means, as long as the trends continue, there’s going to be a growth trend for compression services,” he said. “These factors should provide more avenues for growth and less volatility going forward.”

Another growing trend for onsite equipment is the turn from diesel to produced natural gas for electricity. Doug Balzer, president of Flex Leasing, says his company’s development of a reliable produced-gas-fueled turbine was developed in answer to this demand.

“We started manufacturing our own gas turbines for oil and gas applications in the harshest environments,” he said. Flex Leasing has up to 99 percent run time in -60F environments in Alberta winters and in 110F fields in Texas summers. These units also require only one preventive maintenance event per year and, without post-manufacture modifications, they can run on gas with a wide variety of BTUs, including tank vapor gas and gas with up to 70 percent CO2—and gas whose BTU levels fluctuate.

One is to reduce the need for flaring in fields that are too far from gas pipelines to make it practical to sell the gas. Those remote fields may also be miles from power lines needed to run pumps, electronics, and other equipment. So natural gas is a clean and cost-effective source of generation power. The economics for using gas for power instead of flaring it and getting no benefit are very strong.

Another driver is the cost per kilowatt hour. Often, said Baltzer, utility companies charge 9-11 cents per kwh while, depending on the price of natural gas, the cost to produce electricity onsite through Flex Leasing’s turbines is around 8-10 cents. This makes the onsite costs at least as good, and often slightly better than buying power from the grid.

A third reason also echoes that of leasing compression: capital expenditures. “We do sell some units directly, but most Texas operators are leasing. That’s what most are looking for,” he said.

Even the environmental impact for electric generation is better than for flaring, according to Baltzer. “Our turbines release less than 5 ppmv of NOx and CO, much less than is released by flaring.” He said this meets all environmental regulations and air quality standards, which can expedite the permitting process.

To add flexibility, Flex Leasing can create electric grids that spread generated electricity to other wells owned by the same company. One grid installed north of Midland supplies three megawatts of power to 11 pads.

Current regulations do not allow one producer to sell electricity directly to anyone else, Baltzer said. Neither is it currently possible to sell generated electricity into the ERCOT-controlled (Electricity Reliability Council of Texas) grid, although Baltzer would love to see that option added in the future.

In other areas of the country, Flex Leasing provides these gas-powered turbines to generate electricity for what’s known as “peak shaving.” Because many industrial users are charged very high rates for using electricity at “peak,” or high-usage, times of the day, many of them save money by switching at least partially to self-produced power during those times. This is another main market for Flex Leasing.

As may be deduced from the name, most of Flex Leasing’s customers are like CSI’s—they lease the equipment rather than buying it. The reasons are similar—to reduce capital expenditures and to allow clients to focus on their core business instead of hiring and training field techs to manage and repair their gas turbines.

And, like CSI, Flex Leasing makes its own personnel more efficient—and safe—with remote monitoring and control. If the sensors detect a loss of gas supply, the turbines can be shut off remotely, then restarted remotely when the gas supply resumes. This eliminates extra site trips by technicians in most cases.

Baltzer noted that business in the Permian is two-to-five-times what it is in other basins. “It’s crazy in the Permian—it’s the fastest growing region we have,” he said, voicing a view that is prevalent among most service companies.

Industry as a whole is moving toward outsourcing capital expenditures and expertise—and the oil and gas sector is no exception. Leasing of horsepower or kilowatt hours is part of that trend, and can be expected to gain speed in the next few years.

Paul Wiseman is a freelance writer in Midland.

At GE, Transparency Comes in Fits and Starts: Brooke Sutherland

A MUST WATCH! Dr. Patrick Moore, Co-founder of Greenpeace, discusses climate change and why simple science made him leave Greenpeace