May 9, 2019, by Rachel Adams-Heard and Kevin Crowley
(Bloomberg) 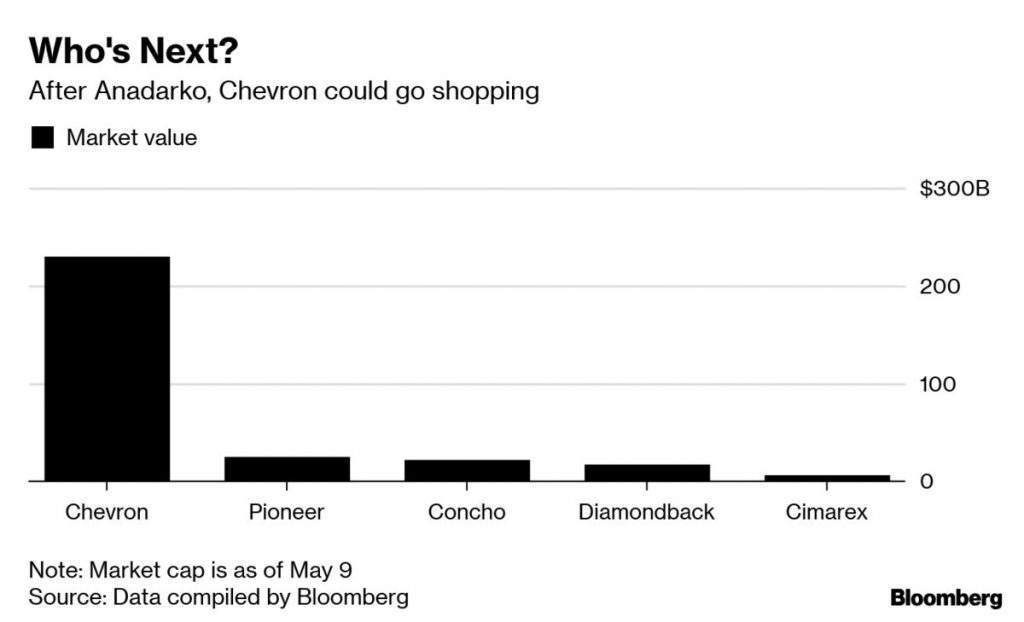 Chevron Corp. is taking its $1 billion breakup fee and walking away from the biggest deal in the oil industry in at least four years. But the supermajor may not be done yet.

In an interview Thursday, Chief Executive Officer Mike Wirth said the company is comfortable with its current position in the Permian Basin and will only seek deals that will add value to shareholders throughout the oil-price cycle.

“We have no intention to do an acquisition unless it’s exceptionally good,” he said by phone after Chevron announced it wouldn’t raise its $33 billion offer for Anadarko Petroleum Corp. to outbid Occidental Petroleum Corp. “There’s a lot of good companies in the Permian,” but Chevron can grow organically for some time, he said later in a Bloomberg Television interview.

Chevron liked Anadarko in large part because of the independent oil producer’s position in the core of the Delaware Basin, a sub-section of the prolific Permian Basin in West Texas and New Mexico.

Here are other Permian players that could end up on Chevron’s shopping list:

Shale legend S cott Sheffield’s return as CEO of Pioneer Natural Resources Co.’s earlier this year triggered speculation that he would sell the company, but he quashed those rumors on a conference call with analysts, saying he “didn’t come back to sell the company.” He later clarified in an interview that he would take any offer to the board for due consideration.

Unlike Anadarko, Pioneer’s acreage is mostly in the Midland Basin, just east of the Delaware. It has at least one similarity to the other company, according to Darrel Koo, a director at RS Energy Group in Calgary: Pioneer doesn’t have the best reputation when it comes to producing oil cheaply.

“We think that they’re actually somewhat uncompetitive compared to some of their peers in the basin, particularly from a cost standpoint,” he said. That makes Pioneer an easy target for oil majors that think they can come in and make big improvements, Koo said.

The downside of buying Pioneer? Chevron, or any other acquirer, would have to pay a hefty premium because Sheffield and his team say they’re not desperate to sell, Koo said.

Executives at Concho Resources Inc. have tip-toed around whether the company would consider a sale. It’s still smoothing out the integration of RSP Permian Inc., bought for $7.6 billion last year. That doesn’t mean the Midland, Texas-based explorer is off-limits to bigger players.

With a massive presence in the Permian, acquiring Concho could give Chevron the inventory it needs to rival Exxon Mobil Corp.’s aggressive growth plans.

“The Permian is such a substantial piece of their long-term company, so they want to make sure they have a long inventory,” said Andrew Dittmar, an M&A analyst at DrillingInfo. “It’s going to take a pretty big acquisition to move the needle.”

But, he added, Chevron would have to make sure that Concho’s post-RSP footprint fits the bill.

Another Permian pure-play fresh off a sizable acquisition, Diamondback Energy Inc. consistently comes up as a potential target.

And also like Concho, Diamondback has a big position in the Delaware Basin, where Chevron has already shown it’s interested. Chief Financial Officer Kaes Van’t Hof said last month that investment bankers came knocking after the original Chevron-Anadarko announcement and that the company would have to talk to its board if it got a bid “at the right number.”

Diamondback is among the best when it comes to producing oil cheaply, but with limited overlap with Chevron, there may not be any “immediate synergies,” said Artem Abramov, head of shale research at Rystad Energy.

“If it is Diamondback, it’ll just be for an overall increase in the size of Chevron’s footprint in the Permian,” he said.

E&Ps with 100,000-200,000 acres may seek to bulk up to remain independent, while those below 100,000 acres will be most challenged, in our view. The valuation disparity among smaller E&Ps suggests to us that consolidation is likely to be driven by companies already within the basin, rather than from outside.– Vincent G. Piazza, analyst Click here to read the researchCimarex

Though a fraction of the size of Anadarko, Cimarex Energy Co. already works with Chevron on a joint venture in Culberson County, Texas. And despite its “very strong balance sheet,” the Denver-based producer would be a cheap pick for Chevron, said Abramov.

A drawback of a tie-up would be Cimarex’s position outside the Permian in the Scoop and Stack formations in Oklahoma. “I think Chevron made it quite clear that they view the Permian as a really unique unconventional play,” he said.

The producer, which isn’t publicly traded and is owned by founder Autry Stephens and his family, controls drilling rights on more than 300,000 acres of mostly undeveloped land in the Permian, making it one of the largest closely held companies in the basin.

Endeavor is in the “middle of the pack” when it comes to its well results, “but we believe the land could be developed more aggressively and with better performance if operated by someone with more experience,” Koo said.

Still, Chevron probably isn’t looking to get into another bidding war; Shell is lining up a partnership with a Canadian pension fund for a potential acquisition of Endeavor, people with knowledge of the matter said in February.

While the top dogs in the Permian are cited most often, analysts and investors have also mentioned smaller players like Parsley Energy Inc. and Jagged Peak Energy Inc. — and independents with a broader focus, including Marathon Oil Corp. and Apache Corp. — as names that could one day end up on a merger agreement.

There’s of course the possibility that a Chevron deal might not be imminent after all.

“We’re not desperate to do a deal” after Anadarko, Wirth said in the TV interview. “We don’t need to do anything in the Permian unless it’s value-adding.”