Sales and other operating revenues in fourth quarter 2018 were $40 billion, compared to $36 billion in the year-ago period.

“Financial and operational results were strong in 2018,” said Michael K. Wirth, Chevron’s chairman of the board and chief executive officer. “Earnings and cash flow continued to grow, and we delivered on all of our financial priorities. We increased the dividend, funded an attractive capital program, strengthened the balance sheet and returned surplus cash to our shareholders. During the second half of the year we repurchased $1.75 billion of the company’s stock, and earlier this week we announced a quarterly dividend increase of $0.07 per share.”

“We reached significant milestones with upstream major capital projects in 2018, including the start-up of Wheatstone Train Two, our fifth operated LNG train in Australia,” Wirth added. “We also continued the ramp-up of the Permian Basin in Texas and New Mexico, started production from the Big Foot Project in the Gulf of Mexico, and continued to progress our Future Growth Project at the company’s 50 percent-owned affiliate, Tengizchevroil, in Kazakhstan.”

“Our net oil-equivalent production grew more than 7 percent in 2018 to a record 2.93 million barrels per day. We expect that 2019 production will continue to grow by 4 to 7 percent, excluding the impact of asset sales,” Wirth commented.

The company added approximately 1.46 billion barrels of net oil-equivalent proved reserves in 2018. These additions, which are subject to final reviews, equate to approximately 136 percent of net oil-equivalent production for the year. The largest additions were from the Permian Basin in the United States and the LNG projects in Australia. The company will provide additional details relating to 2018 reserve additions in its Annual Report on Form 10-K scheduled for filing with the SEC on February 22, 2019.

“Downstream project milestones included the start-up of a new hydrogen train at the Richmond Refinery, as well as the start-up and quick ramp-up of the ethane cracker at the Chevron Phillips’ Cedar Bayou plant,” Wirth added. “We also expanded our new retail marketing network in Mexico to over 100 service stations.”

In late January, the company announced that it has signed an agreement to acquire a 110,000 barrels per day refinery located in Pasadena, Texas.

U.S. upstream operations earned $964 million in fourth quarter 2018, compared with $3.69 billion a year earlier. The decrease was primarily due to the absence of the prior year benefit of $3.33 billion from U.S. tax reform, partially offset by higher crude oil production and realizations.

International upstream operations earned $2.33 billion in fourth quarter 2018, compared with $1.60 billion a year ago. The increase in earnings was mainly due to higher natural gas sales volumes and prices partially offset by higher depreciation expenses from higher production volumes and an asset write-off. Foreign currency effects had a favorable impact on earnings of $264 million between periods. 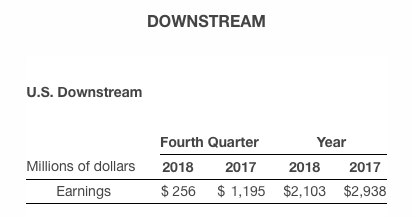 U.S. downstream operations earned $256 million in fourth quarter 2018, compared with earnings of $1.20 billion a year earlier. The decrease was primarily due to the absence of the prior year benefit of $1.16 billion from U.S. tax reform and higher operating expenses, partially offset by higher margins on refined product sales.

Refinery crude oil input in fourth quarter 2018 increased 10 percent to 918,000 barrels per day from the year-ago period, primarily due to the absence of turnarounds at the El Segundo, California refinery and the absence of impacts from Hurricane Nate at the Pascagoula, Mississippi refinery. Refined product sales of 1.21 million barrels per day were up 3 percent from fourth quarter 2017.

International downstream operations earned $603 million in fourth quarter 2018, compared with $84 million a year earlier. The increase in earnings was largely due to higher margins on refined product sales. Foreign currency effects had a favorable impact on earnings of $85 million between periods.

Total refined product sales of 1.40 million barrels per day in fourth quarter 2018 were down 8 percent from the year-ago period, primarily due to the sale of the southern Africa refining and marketing business in third quarter 2018.

Net charges in fourth quarter 2018 were $419 million, compared with $3.46 billion in the year-ago period. The change between periods was mainly due to the absence of a prior year tax charge of $2.47 billion related to U.S. tax reform and the absence of a reclamation related charge for a former mining asset. Foreign currency effects had a favorable impact on earnings of $15 million between periods.

Chevron’s discussion of fourth quarter 2018 earnings with security analysts will take place on Friday, February 1, 2019, at 8:00 a.m. PST. A webcast of the meeting will be available in a listen-only mode to individual investors, media, and other interested parties on Chevron’s website at www.chevron.com under the “Investors” section. Additional financial and operating information and other complementary materials will be available under “Events and Presentations” in the “Investors” section on the Chevron website.

As used in this news release, the term “Chevron” and such terms as “the company,” “the corporation,” “our,” “we,” “us” and “its” may refer to Chevron Corporation, one or more of its consolidated subsidiaries, or to all of them taken as a whole. All of these terms are used for convenience only and are not intended as a precise description of any of the separate companies, each of which manages its own affairs.

This news release contains forward-looking statements relating to Chevron’s operations that are based on management’s current expectations, estimates and projections about the petroleum, chemicals and other energy-related industries. Words or phrases such as “anticipates,” “expects,” “intends,” “plans,” “targets,” “forecasts,” “projects,” “believes,” “seeks,” “schedules,” “estimates,” “positions,” “pursues,” “may,” “could,” “should,” “will,” “budgets,” “outlook,” “trends,” ”guidance,” “focus,” “on schedule,” “on track,” “is slated,” “goals,” “objectives,” “strategies,” “opportunities,” and similar expressions are intended to identify such forward-looking statements. These statements are not guarantees of future performance and are subject to certain risks, uncertainties and other factors, many of which are beyond the company’s control and are difficult to predict. Therefore, actual outcomes and results may differ materially from what is expressed or forecasted in such forward-looking statements. The reader should not place undue reliance on these forward-looking statements, which speak only as of the date of this news release. Unless legally required, Chevron undertakes no obligation to update publicly any forward-looking statements, whether as a result of new information, future events or otherwise.

Among the important factors that could cause actual results to differ materially from those in the forward-looking statements are: changing crude oil and natural gas prices; changing refining, marketing and chemicals margins; the company’s ability to realize anticipated cost savings and expenditure reductions; actions of competitors or regulators; timing of exploration expenses; timing of crude oil liftings; the competitiveness of alternate-energy sources or product substitutes; technological developments; the results of operations and financial condition of the company’s suppliers, vendors, partners and equity affiliates, particularly during extended periods of low prices for crude oil and natural gas; the inability or failure of the company’s joint-venture partners to fund their share of operations and development activities; the potential failure to achieve expected net production from existing and future crude oil and natural gas development projects; potential delays in the development, construction or start-up of planned projects; the potential disruption or interruption of the company’s operations due to war, accidents, political events, civil unrest, severe weather, cyber threats and terrorist acts, crude oil production quotas or other actions that might be imposed by the Organization of Petroleum Exporting Countries, or other natural or human causes beyond the company’s control; changing economic, regulatory and political environments in the various countries in which the company operates; general domestic and international economic and political conditions; the potential liability for remedial actions or assessments under existing or future environmental regulations and litigation; significant operational, investment or product changes required by existing or future environmental statutes and regulations, including international agreements and national or regional legislation and regulatory measures to limit or reduce greenhouse gas emissions; the potential liability resulting from other pending or future litigation; the company’s future acquisition or disposition of assets or shares or the delay or failure of such transactions to close based on required closing conditions; the potential for gains and losses from asset dispositions or impairments; government-mandated sales, divestitures, recapitalizations, industry-specific taxes, tariffs, sanctions, changes in fiscal terms or restrictions on scope of company operations; foreign currency movements compared with the U.S. dollar; material reductions in corporate liquidity and access to debt markets; the effects of changed accounting rules under generally accepted accounting principles promulgated by rule-setting bodies; the company’s ability to identify and mitigate the risks and hazards inherent in operating in the global energy industry; and the factors set forth under the heading “Risk Factors” on pages 19 through 22 of the company’s 2017 Annual Report on Form 10-K. Other unpredictable or unknown factors not discussed in this news release could also have material adverse effects on forward-looking statements.