US Oil and Gas Jobs Are Still in Short Supply

When you hear the term “Artificial Intelligence”, do you think robots and doomsday? Or maybe a future where your house talks to you and your car drives you to work? There is a lot of curiosity around the concept of AI, and thanks to Hollywood, there’s also a lot of misconception. Luckily, we are here to help. In 2013, the Founders of Aimsio were completing their grad studies at the Artificial Intelligence lab at that University of Calgary, so we’re excited to shed some light on the subject.

So, What is Artificial Intelligence? 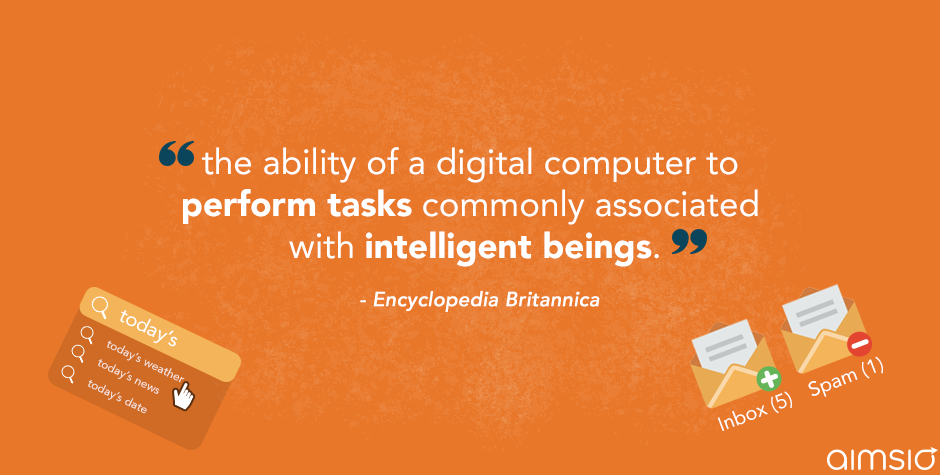 Encyclopedia Britannica defines artificial intelligence as “the ability of a digital computer to perform tasks commonly associated with intelligent beings.” Ok, but what exactly does it mean to be intelligent? In terms of AI, we’re interested in abilities like learning, problem solving and reasoning. When software has these abilities, it can generalize information and discover meaning. Things get really exciting when programs can learn from past experiences, allowing them to adapt, predict future events and optimize processes. Simple examples of this include how a search engine finishes your sentence for you, or how spam mail is filtered from your inbox. These are examples of machine learning, a type of AI we encounter in our everyday life.

This is, for the most part, the concept of AI that people are most familiar with: a hardware/software combination that imitates a human to some degree. But there is much more to AI, trust us. Before we get deeper into what AI is, let’s take a look at how it started.

AI first appeared as a concept in literature in 1950. Alan Turing (a fascinating individual, definitely worth Googling) wondered if, like humans, machines could use information and reason to solve problems and make decisions. At that time, the capabilities and cost of computers prevented Turing’s logic from being tested (speaking of tests, to this day, the Turing Test remains an indicator of whether or not a computer can think like a human being). After Turing’s death in 1954, other computer scientists continued to develop algorithms with the goal of creating a computer with human intelligence. In 1970, American scientist Marvin Minsky stated a computer with the general intelligence level of an average human being was five to seven years away. Minsky’s timeline was off but computational power increased and, eventually, Turing’s vision of AI began to take shape. In 1997, IBM’s chess-playing computer program demonstrated intelligent decision making capabilities by beating the reigning world champion. The same year, speech recognition software was introduced by Windows, meeting the intelligence criteria of language interpretation. 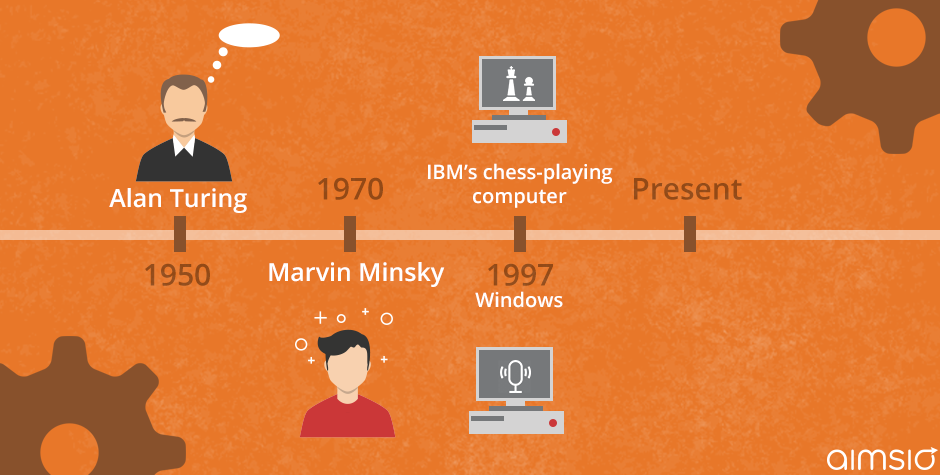 Pretty cool, but these accomplishments represent only one application of AI. A recent essay by UC Berkeley professor Michael Jordan (not the NBA legend, we double checked) argues that the term “artificial intelligence” is widely misunderstood. Most people assume AI is exclusively  “human-imitative” applications such as playing chess, which, in his opinion, have seen the least progress and are the least valuable. Two other applications for intelligent computing have more practical uses (according to Jordan) and have been developing continually as the need for things such as document retrieval and search engines arose.

The first of these categories is referred to as “Intelligence Augmentation” (IA) That’s right, 26 letters in the alphabet and they chose to use the same two. Initiatives in this group use data and computation to “augment human intelligence and creativity”. Search engines are one example of IA because they extend the ability of human memory and factual knowledge. Also in this category are programs that help people create art and music or translate different languages.

The next discipline proposed by Jordan is “Intelligent Infrastructure” (II), which is basically your talking house or the car that drives you to work. And anything else you can think of that could make your life easier. Automated lawn mower, anyone? Perhaps health care à la the Starship Enterprise?

Jordan also predicts that a new branch of engineering will emerge from this application that will “bring together computers and humans in ways that enhance human life.” This sweet spot is where Aimsio lives. We created a software platform that helps companies manage every aspect of their field operations, from estimating to getting paid and reporting. And while AI hasn’t been integrated into our product yet, there are plans to do so. We’re all about efficiency, which means using AI for estimating, dispatching and to optimize routes is on the horizon for us. We will continue talking about the future of AI and specifically how it can be applied to field operations in our next blog. In the meantime, if you’re curious about what Intelligent Infrastructure for your business might look like, click the link below to take a look at what our software can do.

The U.S. Has Turned Into a Major Oil Power Again: Justin Fox

The Biggest Source of Power for Every U.S. State & Canadian Province
Alternative Energy Industry Leans on Pandell’s Land Asset Management Software to Reach 60% Growth by 2026
A Guide to Integrating Safety Throughout Your Oil and Gas Organization
Sustainably meeting the security and operational needs of solar farms