“Are we entering a Golden Age of Gas?” – That was the question the International Energy Agency asked in 2011 when examining the combination of market dynamics and policies that might allow natural gas to thrive in the future.

The idea of a “Golden Age” was built on a few pillars. On the supply side, the main thesis was that the abundance of unconventional gas resources would help to bring down supply costs, making natural gas more attractive and accessible worldwide. On the demand side, the main elements were an ambitious policy promoting gas use in China, lower growth in nuclear power and more use of gas in road transport.

Seven years later, most of these pillars are still at least partly in place. Today’s price levels are very much in line with those in the “Golden Age” analysis; China has reserved a strategic role in its energy policy for gas; the outlook for nuclear has indeed faded somewhat; the only area where natural gas has not made much ground is road transport, where electric vehicles have taken the lead.

Yet the mood in the natural gas industry, at least outside the United States, has not always been so optimistic since then. Demand has slowed considerably for most of the period since 2011, from an average of 2.8% per year between 2000 and 2010, to 1.4% per year from 2011-2016; lower prices squeezed revenues; traditional business models have been questioned without anyone being sure what will take their place; and the competitive landscape has become significantly more complex, as the traditional sparring partners for gas – coal and, to a lesser extent, oil – have been joined by the rising forces of renewables and energy efficiency.

What could the long-term outlook look like for natural gas? Every year, the World Energy Outlook chooses a fuel for an in-depth analysis. In 2017, that focus was on natural gas. The four chapters of that analysis, including a wealth of detail on the outlook for natural gas, are now available to download for free – and describe in detail the possible long-term opportunities and constraints that could face this fuel in the future.

Three key trends highlighted in the WEO projections and in the IEA’s five-year forecasts also came through very clearly in new data on global energy and CO2 emissions trends for 2017.

China and other emerging markets are the consumers of the future

Natural gas demand rebounded and grew by an estimated 3% in 2017. China alone accounted for nearly 30% of global growth – with more than 30 bcm out of a total of nearly 120 bcm. This reflects a structural shift in the Chinese economy away from energy-intensive industrial sectors as well as a move towards cleaner energy sources, with both trends benefiting natural gas. As part of the official policy drive to “make China’s skies blue again,” there has been a strong push to phase out the practice of burning coal in industrial boilers (especially those in and around major cities) as well as reduce coal use for residential heating.

In the New Policies Scenario to 2040, global natural gas consumption expands at an average rate of 1.6% per year to 2040, lower than the estimated 3% achieved in 2017 but a much higher rate than oil (0.5% per year on average) and coal (essentially flat). More than 80% of this growth takes place in developing countries, led by China, India and other countries in Asia. The challenge for the gas industry is that much of the gas needs to be imported (and so transportation costs are significant); infrastructure is often not yet in place; and policy-makers and consumers are very sensitive to questions of affordability. 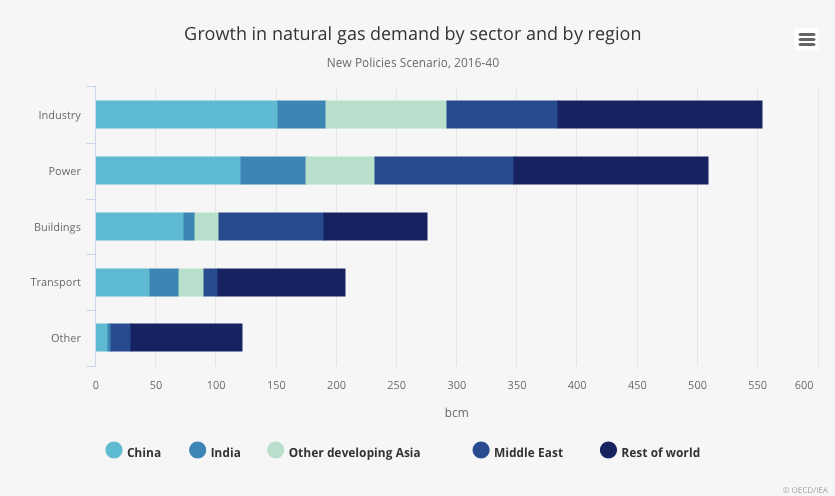 Gas-for-power is no longer the main growth opportunity

The data for 2017 show that most of the increase came from gas consumption by industry and for use in buildings. In the WEO analysis, power generation is no longer the main projected growth area, even though this is currently the largest gas-consuming sector worldwide. Competition from other sources of electricity generation, from renewables in particular, is fierce. Only where gas prices are expected to be very low (e.g. United States, Russia and parts of the Middle East) is it commercially viable for gas plants to run at high utilisation rates and provide baseload power. In most gas-importing regions, the primary role of gas plants is to provide mid-load and peak load power, implying significantly lower utilisation rates and hence lower gas burn.

In the New Policies Scenario, the largest increase in gas demand comes instead from industry. Where gas is available, it is very well suited to meeting industrial demand. Competition from renewables is more limited, especially for provision of high-temperature heat. Gas typically beats oil on price, and beats coal on convenience and on emissions (notably for air pollutants, a major policy consideration in many developing countries). A similar combination of convenience and environmental advantages helps gas to displace household coal consumption for heating and as a cooking fuel. Gas also has potential in some countries as a lower emissions alternative to oil for transportation, especially for heavy-duty vehicles.

Gas consumers responded in 2017 to abundant and relatively low-cost supplies, underlining that – if natural gas is to gain a firm foothold in emerging markets – it is of crucial importance that suppliers keep the cost gap to alternative fuels, including solar and wind, as narrow as possible. Projected changes on the supply side are indeed maintaining some downward pressure on prices and increasing the comfort that importers can feel in the future security and diversity of supply. A period of ample availability of LNG, driven largely by new liquefaction capacity in Australia and the United States, is deepening market liquidity and the ability to procure gas on a short-term basis. New projects and exporters are increasing the range of potential suppliers and competition for customers. Destination-flexible US exports are reducing the rigidity of LNG trade. More and more gas is being priced on the basis of benchmarks that reflect the supply-demand balance for gas, rather than the price of alternative fuels. The contours of a new, more globalised gas market are becoming visible.

This re-writing of the gas rulebook is creating uncertainty for some producers, who have claimed that long-term contracts indexed to oil prices and other trade rules (notably take-or-pay clauses) are vital for the financing of capital-intensive upstream and infrastructure projects. In the WEO-2017, we argue that the emergence of a new, more flexible gas order, the rise of major company “aggregators” that maintain a diverse global portfolio of gas sources and market positions, and a marked shift towards LNG are interdependent developments. The risk of a shortfall of investment in new supply is real, but in our judgement there is scope for brownfield project expansions and smaller, less capital-intensive projects in the LNG business to underpin project development in the next ten years and prevent a hard landing for markets in the 2020s. As gas trade expands by more than 500 bcm over the period to 2040, LNG’s inherent flexibility give it the edge over most new cross-border pipeline projects and, as a result, LNG meets the lion’s share of the growth in long-distance gas trade in the period to 2040. Although the European Union remains the largest importer of gas, Asian countries lead the growth in global gas trade with the Asia Pacific region as a whole accounting for some 80% of the growth in net-imports. 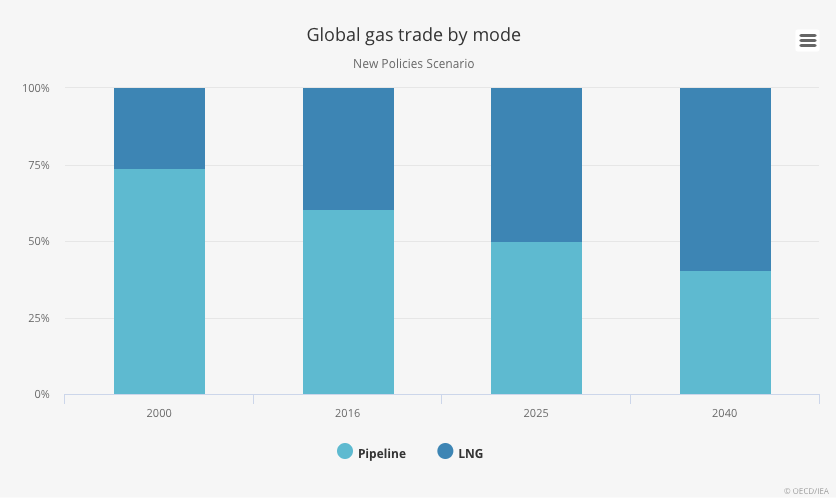 The other key debate about natural gas that we focused on in the WEO-2017 is its role in the multiple energy transitions that are underway. This includes how gas might fare in a scenario that is consistent with the Paris Agreement and the sharp reductions in global emissions that are required to keep the rise in global average temperatures down to ‘well below 2 degrees’ and to improve the world’s air quality.

Two key attributes of gas come strongly into play in this discussion. First, versatility: gas can play multiple roles across the energy system in a way that no other fuel or technology can match, generating power, heat, and mobility. Second, the environmental dimension: combustion of natural gas does produce nitrogen oxides (NOX), but emissions of the other major sources of poor air quality, particulate matter and sulfur dioxide, are negligible. The combustion of gas releases some 40% less CO2 than the combustion of coal and around 20% less than the burning of oil. Taking into account the efficiency of transforming gas into electricity, a combined-cycle gas turbine emits around 350 grammes of CO2 per kilowatt-hour, well under half of what a supercritical coal plant emits for the same amount of electricity. Gas-fired power plants also have technical and economic characteristics that make them a very suitable partner for a strategy favouring the expansion of variable renewables.

However, the industry cannot take it for granted that environmental arguments work in its favour, especially in ambitious decarbonisation scenarios such as the Sustainable Development Scenario. As the cleanest burning fossil fuel and one that emits few local air pollutants, natural gas fares best among the fossil fuels in the Sustainable Development Scenario, with consumption increasing by nearly 20% between 2016 and 2030 before exhibiting a very gradual decline. However, the contribution of natural gas to decarbonisation in this scenario varies across regions, between sectors and over time. In energy systems that are currently heavily reliant on coal, notably in China and India, natural gas can play a sustained, positive role. It has much less potential to help emissions reduction in more mature gas markets, although in the United States and Europe there is a window of opportunity for gas to aid decarbonisation by accelerating the switch away from coal. With the rapid ascent of low-carbon technologies in this scenario, the principal function of gas is to provide flexibility to support the integration of variable renewables. For some industrial applications, and in some parts of the transport sector, the “bridge” for gas is a much longer one, as cost-effective renewable alternatives are less readily available. 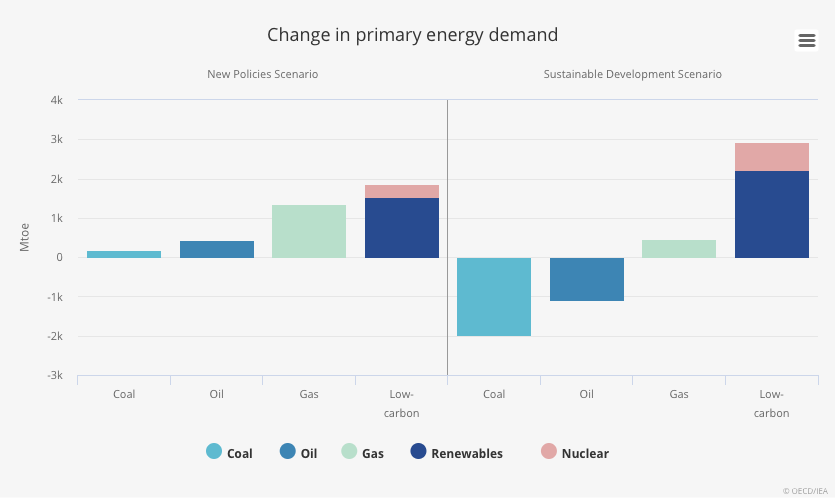 Secondly, it is important to recall that methane – the primary component of natural gas – is a potent greenhouse gas and emissions of methane along the oil and gas value chain (which are estimated for 2015 at around 76 Mt of methane) threaten to reduce many of the climate advantages claimed by gas. In the WEO-2017, we present first-of-a-kind marginal abatement cost curves for methane emissions from oil and gas operations, which suggest that around 40-50% of today’s emissions from the oil and gas sector could be avoided using approaches that have zero or negative costs (because the captured methane can be sold). Implementing just these cost-effective abatement measures in the New Policies Scenario would have the same impact on reducing the average global surface temperature rise in 2100 as immediately shutting all existing coal-fired power plants in China. If natural gas is to play a credible role in the transition to a decarbonised energy system, this is an opportunity for action that cannot be ignored.

Ultimately, the prospects for natural gas will be determined by how it is assessed by policy-makers and prospective consumers against three criteria: is it affordable, is it secure, and is it clean? In each of these areas, there is homework for the industry to do, to keep costs under control, to ensure adequate and timely investment, and to tackle the issue of methane emissions. If the answers to these questions are positive, then gas can make a persuasive pitch for a place in countries’ energy strategies, underpinning further infrastructure development and opening new opportunities for growth.

The International Energy Agency will provide its updated 5-year gas markets forecasts in the next Gas 2018 publication, which will be launched at the World Gas Conference, in Washington D.C., on 26 June 2018.