PetroQuest Energy, Inc. (NYSE:PQ) today announced the sale of its Gulf of Mexico properties (the “Sold Assets”) on January 31, 2018, but effective as of December 1, 2017. As a result of the sale, the Company has eliminated an approximate $35.4 million undiscounted abandonment liability from its long-term obligations.  The Company received no proceeds from the sale of these properties and is required to contribute $3.75 million towards future abandonment costs.  In connection with the sale, the Company expects to receive a cash refund of approximately $10.3 million related to a depositary account that served to collateralize a portion of the Company’s offshore bonds. All of the Company’s production is now derived from assets located onshore Louisiana and Texas.

The following tables set forth information about the Company’s estimated proved reserves, including proforma for the divestiture of the Sold Assets: 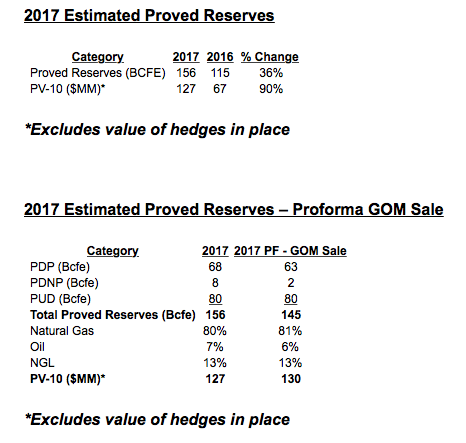 Based upon estimated 2017 production, the Company estimates that it achieved a 247% reserve replacement ratio during 2017 and expects that its all-in finding and development costs during 2017 to be approximately $0.70/Mcfe.

The Company expects to provide first quarter 2018 guidance metrics and 2018 capital expenditure guidance and plans in connection with its 2017 year-end earnings release in early March 2018.

Management’s Comment
“After completing the sale of our Gulf of Mexico properties, we have eliminated a considerable long-term abandonment liability and have substantially reduced our exposure to future regulatory, environmental, surety and weather risks inherent in offshore operations.  In addition, the sale will increase our net liquidity by $6.5 million and allow us to focus our attention on developing our onshore assets in East Texas and in the Louisiana Austin Chalk trend,” said Charles T. Goodson, Chairman, Chief Executive Officer and President. “While our production and reserve profiles will experience near-term reductions after this divestiture, we believe that this transaction will ultimately drive value creation.”

Forward-Looking Statements
This news release contains “forward-looking statements” within the meaning of Section 27A of the Securities Act of 1933, as amended, and Section 21E of the Securities Exchange Act of 1934, as amended. All statements other than statements of historical fact included in this news release are forward-looking statements. Although the Company believes that the expectations reflected in these forward-looking statements are reasonable, these statements are based upon assumptions and anticipated results that are subject to numerous uncertainties and risks. Actual results may vary significantly from those anticipated due to many factors, including the volatility of oil and natural gas prices and significantly depressed oil prices since the end of 2014; our indebtedness and the significant amount of cash required to service our indebtedness; our estimate of the sufficiency of our existing capital sources, including availability under our multi-draw term loan facility; our ability to fund and execute our Cotton Valley and Austin Chalk development programs as planned; our ability to increase recoveries in the Austin Chalk formation and to increase our overall oil production as planned; our estimates with respect to fracked Austin Chalk wells in Louisiana, including production EURs and costs; our estimates with respect to production, reserve replacement ratio and finding and development costs; our receipt of a cash refund with respect to our offshore bonds and the timing and amount of the same; our ability to hedge future production to reduce our exposure to price volatility in the current commodity pricing market; our ability to find, develop and produce oil and natural gas reserves that are economically recoverable and to replace reserves and sustain and/or increase production; ceiling test write-downs resulting, and that could result in the future, from lower oil and natural gas prices; our ability to raise additional capital to fund cash requirements for future operations; limits on our growth and our ability to finance our operations, fund our capital needs and respond to changing conditions imposed by our multi-draw term loan facility and restrictive debt covenants; less than 25% of our production being exposed to the additional risk of severe weather, including hurricanes, tropical storms and flooding, and natural disasters; losses and liabilities from uninsured or underinsured drilling and operating activities; changes in laws and governmental regulations as they relate to our operations; the operating hazards attendant to the oil and gas business; the volatility of our stock price; and our ability to meet the continued listing standards of the New York Stock Exchange with respect to our common stock or to cure any deficiency with respect thereto. In particular, careful consideration should be given to cautionary statements made in the various reports the Company has filed with the SEC. The Company undertakes no duty to update or revise these forward-looking statements.