The Company’s reserves at December 31, 2017 as set forth in the GLJ Report are summarized below: 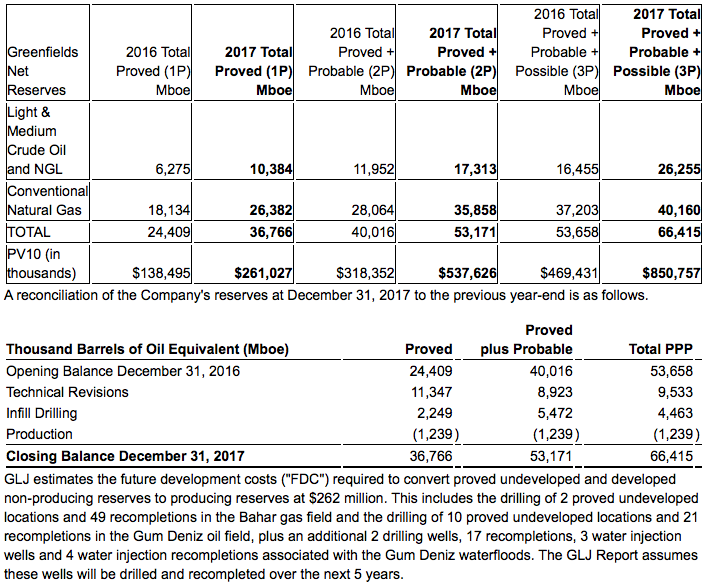 John W. Harkins, President and CEO of Greenfields, stated: “We are very pleased that the technical reservoir evaluation undertaken over the past eighteen months has identified such a significant number of growth opportunities in both the oil field and the gas field. We are now looking forward to the drilling campaign with SOCAR Drilling Complex Trust as we aim to drill development wells to the BH NKP reservoirs in the Bahar gas field and increase our gas sales to Azerbaijan.”

“We also expect the re-initiation of water injection and waterflooding in the Gum Deniz oil fields, by converting some of the existing producers, to lead to the re-pressuring of the oil reservoirs and increased oil production over the next few years”.

Greenfields is a junior oil and natural gas corporation focused on the development and production of proven oil and gas reserves principally in the Republic of Azerbaijan. The Company plans to expand its oil and gas assets through further farm-ins and acquisitions of Production Sharing Agreements from foreign governments containing previously discovered but under-developed international oil and gas fields, also known as “greenfields”. More information about the Company may be obtained on the Greenfields website at www.greenfields-petroleum.com.

Information Regarding Disclosure on Oil and Gas Reserves. The reserves data set forth above is based upon an independent reserves assessment and evaluation prepared by GLJ with an effective date of December 31, 2017. The reserves were evaluated in accordance with the standards contained in the Canadian Oil and Gas Evaluation Handbook and the reserve definitions contained in National Instrument 51‐101 ‐ Standards of Disclosure for Oil and Gas Activities (“NI 51‐101″).

Caution Regarding Reserves Information. This press release summarizes the Company’s crude oil and natural gas reserves and the net present values before income tax of future net revenue for the Company’s reserves using forecast prices and costs based on the GLJ Report. All reserve references in this press release are based on gross reserves, which are equal to the Company’s total working interest reserves before the deduction of any royalties and including any royalty interests of the Company. All evaluations and reviews of future net cash flows are stated prior to any provisions for interest costs or general and administrative costs and after the deduction of estimated future capital expenditures for wells to which reserves have been assigned.

All future net revenues are estimated using forecast prices, arising from the anticipated development and production of the Company’s reserves, net of the associated royalties, operating costs, development costs, and abandonment and reclamation costs and are stated prior to provision for interest and general and administrative expenses. Future net revenues have been presented on a before tax basis. Estimated values of future net revenue disclosed herein do not represent fair market value. Future development costs are calculated as the sum of development capital plus the change in future development costs for the period. The reserve data provided in this press release only represents a summary of the disclosure required under NI 51-101. Additional disclosure will be provided in the Company’s Annual Information Form which will be filed on www.sedar.com prior to May 1, 2018.

BOE. Barrels of oil equivalent or “boe” may be misleading, particularly if used in isolation. All volumes disclosed in this press release use a 6mcf: 1boe, as such is typically used in oil and gas reporting and is based on an energy equivalency conversion method primarily applicable at the burner tip and does not represent a value equivalency at the wellhead. The Company uses a 6mcf: 1boe ratio to calculate its share of entitlement sales from the Bahar gas field for its financial reporting and reserves disclosure.

Drilling Locations. This press release discloses drilling inventory in proved locations. Proved locations are derived from the GLJ Report and account for drilling locations that have associated proved reserves.