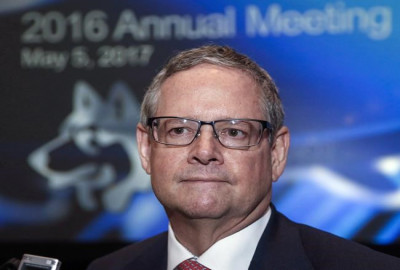 CALGARY — Husky Energy Inc. (TSX:HSE) is planning to increase its capital spending in 2018 to between $2.9 billion and $3.1 billion.

That includes up to $1.1 billion on growth projects and up to $2 billion on sustaining and corporate spending.

The 2018 capital budget is below the annual average of $3.3 billion a year anticipated in the company's five-year plan, but above its 2017 spending, estimated at about $2.2 billion to $2.3 billion.

Among other things, spending on Husky's thermal bitumen operations in Western Canada will rise to between $895 million and $930 million from between $560 million and $590 million.

The Calgary-based integrated oil and gas company says new project funding is contingent on meeting a forecast minimum 10 per cent rate of return with a benchmark price of West Texas Intermediate crude at US$45 per barrel.

Next year's annual production is estimated to average the equivalent of 320,000 to 335,000 barrels of oil per day — about the same as this year.